The semiconducting Magnus' salt derivatives [Pt(NH2eh)4][PtCl4] and [Pt(NH2dmoc)4][PtCl4], with eh = (R)-2-ethylhexyl and dmoc = (S)-3,7-dimethyloctyl, are compounds that exhibit a supramolecular structure comprising a backbone of linear arrays of platinum atoms. These compounds behave essentially like ordinary polymers. In this work they were processed into fibres by electrospinning from organic solvents such as toluene. X-ray diffraction patterns indicated that the platinum arrays in the fibres were oriented parallel to the axis of the fibres. Accordingly, the fibres show anisotropic optical and electrical properties. The electrical conductivities observed along the fibre axis were 2 × 10−5 S cm−1 for [Pt(NH2dmoc)4][PtCl4] and 7 × 10−7 S cm−1 for [Pt(NH2eh)4][PtCl4] . These exceeded the values for the respective bulk compounds by 2–3 orders of magnitude, in agreement with comparable observations in oriented semiconducting organic polymers.

In their solid state, some metal complexes assume quasi-one-dimensional structures comprising linear arrays of metal atoms (mostly present as cations) (1–3) . The anisotropic nature of such materials renders them attractive for their optical and electrical properties (1–3) . Among these compounds, the most widely investigated have been Magnus' green salt (4, 5), [Pt(NH3)4][PtCl4], and its derivatives of the type [Pt(L1)4][Pt(L2)4] (3, 6–8), where L1 denotes a neutral ligand and L2 denotes an anionic ligand or a corresponding part of a multidentate ligand, respectively. These species comprise a supramolecular arrangement of the planar [Pt(L1)4]2+and [Pt(L2)4]2− units which are stacked alternately (Figure 1). Notably, the alignment of the platinum atoms in these compounds is a consequence of the electrostatic forces between the alternately charged coordination units (7, 9). These electrostatic forces, as well as crystal packing effects, determine the interplatinum distances that typically amount to 3.1–4.0 Å (7, 10–12) . In compounds with Pt–Pt distances shorter than ca. 3.5 Å, the orbitals of adjacent platinum atoms overlap significantly. As a consequence these compounds become semiconductive.

Chemical structure of Magnus' green salt and some of its derivatives (eh = (R)-2-ethylhexyl; dmoc = (S)-3,7-dimethyloctyl) 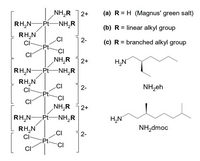 Processing of compounds derived from Magnus' salt has hitherto been cumbersome, if not impossible, because these complexes are largely insoluble and do not melt prior to decomposition. Only recently have solution-processible Magnus' salt derivatives of the type [Pt(NH2R)4][PtCl4], with R being an alkyl group, been synthesised (7, 9, 13, 14). The side groups R not only favour solubility in organic solvents, but also influence the interplatinum distances, and therefore dictate the physical properties of the corresponding bulk materials. For example, the complex with R = octyl, having a relatively large Pt–Pt distance (ca. 3.6 Å), was found to be an electrical insulator, whereas those with R = (R)-2-ethylhexyl (eh) and R = (S)-3,7-dimethyloctyl (dmoc), by contrast, were semiconductors as a consequence of their relatively short Pt–Pt spacings (< 3.3 Å). Importantly, the soluble [Pt(NH2R)4][PtCl4] derivatives could be processed like common polymers (14–16), enabling, for instance, the manufacture of fibres by standard technologies. In the present work, we have explored the use of a process known as electrospinning to produce filaments of selected Magnus' salt derivatives.

Electrospinning (17–20) is a relatively old process (dating from the late 1910s), which has provoked renewed interest for the preparation of polymer fibres in recent years. In this technique, fibres are produced from polymer solutions under the action of electrostatic forces. Upon charging a polymer solution, the electric forces at the liquid surface can overcome the surface tension, resulting in a jet of electrically charged solution that is ejected towards an oppositely charged collector. If the solvent concomitantly evaporates, then polymer fibres accumulate at the collector. We have already reported the preparation of fibres by electrospinning of the insulating complex [Pt(NH2R)4][PtCl4] with R = octyl (14). The production of these fibres was supported by the particular phase behaviour of these Magnus' salt derivatives. These compounds formed thermoreversible gels even at low concentrations of the Pt-complex, which strongly facilitated the spinning process. However, the resulting fibres are of only modest interest due to their insulating nature. Hence, in the following, emphasis is placed on the preparation and characterisation of fibres of semiconducting [Pt(NH2R)4][PtCl4] compounds with R = dmoc and eh. This treatment significantly expands on a previous brief sketch on R = dmoc filaments (16).

Electrospinning of fibres of previously synthesised [Pt(NH2R)4][PtCl4] (R = eh or dmoc) was performed from solutions of the compound in toluene, using a simple laboratory setup (Figure 2). In principle, it is possible to make very long fibres with this method by using a rotating metal cylinder instead of a metal plate as the negative electrode. Process parameters for the experiment (including optimal conditions) are given in Table I. 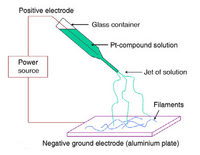 * For R = eh, long, thin fibres were obtained when the voltage was gradually increased from 7 to 10 kV during processing

Uniform fibres of [Pt(NH2dmoc)4][PtCl4] were produced, with lengths of 1–5 mm and diameters ranging from 0.1 µm to 2 µm. The large difference between the lengths of fibres obtained for the two compounds is attributed to the shorter Pt chain length of the [Pt(NH2dmoc)4][PtCl4] compound in toluene solution, compared with that for [Pt(NH2eh)4][PtCl4] (9, 13). Fibres of [Pt(NH2eh)4][PtCl4] with a diameter of about 1 µm could be formed into a loop of 20 mm cross-section (Figure 3). This implies that the fibres possessed a considerable flexibility and resistance to bending stresses. These particular fibres broke as the loop was further tightened. Unfortunately, the [Pt(NH2dmoc)4][PtCl4] fibres were too short to carry out this experiment on them. 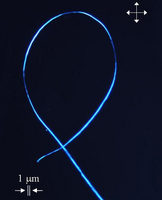 Both types of fibres displayed notable birefringence in the polarising optical microscope. For fibres observed between crossed polarisers, light was transmitted at maximum intensity at an angle of 45° between the polarisers and the axis of the fibres. The transmitted light intensity was drastically reduced when the fibre's axis was parallel or perpendicular to one of the polarisers, indicating that the quasi-one-dimensional structures were indeed oriented within the filaments along the filament axis. Molecular orientation of the Pt-structures within [Pt(NH2eh)4][PtCl4] fibres was confirmed by strong equatorial arcs in wide-angle X-ray diffraction pattern from a bundle of fibres (Figure 4). The average orientation angle derived from the half-width at half-maximum intensity of the major equatorial reflections (21) was found to be ∼ 13°. This value indicates a low degree of orientation of the Pt-fibres as compared with that of, for instance, liquid crystalline polymer fibres such as aramids, high-performance polyethylene and poly(hexyl isocyanate) (PHIC) (21). Nevertheless, the orientation of the Pt-fibres is still significant considering that the organisation of the Pt-structures within the fibres is governed by electrostatic forces.

Wide-angle X-ray diffraction pattern of a bundle of oriented [Pt(NH2eh)4][PtCl4] fibres. The double arrow indicates the direction of the fibres 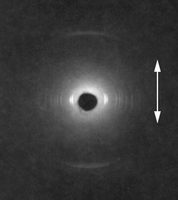 A tilt compensator (MgCl2 crystal) revealed a positive sign for the birefringence of [Pt(NH2dmoc)4][PtCl4] and [Pt(NH2eh)4][PtCl4], demonstrating that the refractive index was greater in the direction of the fibre's axis than perpendicular to it. Interestingly, at higher magnifications, alternating bright and dark parallel bands appeared when [Pt(NH2eh)4][PtCl4] fibres were examined between crossed polarisers (Figure 5). These bands were separated by 10–15 µm and were perpendicular to the fibre's axis. These rather striking features strongly resemble those found in aramid fibres, for which their occurrence has been explained by a pleated sheet structure (22).

Optical micrograph of a [Pt(NH2eh)4][PtCl4] fibre between crossed polarisers displaying bands which are indicative of a pleated sheet structure. The double arrows indicate the configuration of the polarisers 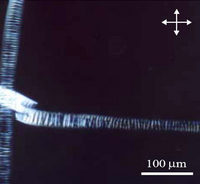 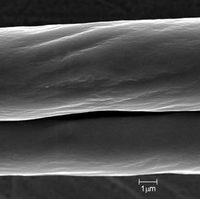 The bulk electrical conductivity along the axis of [Pt(NH2dmoc)4][PtCl4] fibres amounted to 2 × 10−5 S cm−1, and for [Pt(NH2eh)4][PtCl4] to 7 × 10−7 S cm−1. These values exceeded those for the respective bulk compounds by approximately 2 or 3 orders of magnitude (1.6 × 10−7 S cm−1 and 7 × 10−10 S cm−1, respectively). Similar enhancements with orientation have also been observed for (semi-)conducting organic polymers (23). This is consistent with the assertion that the platinum chain structures in the filaments are oriented preferentially, with the quasi-one-dimensional axis parallel to the fibre's axis, since the platinum arrays are the principal conduction path.

Finally, in order to explore whether metallic platinum fibres could be produced by degradation of the solution-spun Pt-compounds, a number of fibres were subjected to plasma etching under an oxygen atmosphere for 20 min and 1 h periods, conducted in a plasma chamber. Interestingly, the macroscopic shape of the fibres was preserved and the samples could still be handled after this plasma treatment. SEM analysis of the morphology of [Pt(NH2eh)4][PtCl4] fibre surfaces after 20 min plasma treatment revealed a surface structure of a characteristic length of 100–200 nm (Figure 7(a)). Upon exposure of 1 h, the structure coarsened and appeared to increase in density (Figure 7(b)). This series of samples showed a weight loss of 25–30% after 20 min plasma treatment and of ca. 50% after 1 h. After 5 h plasma treatment the fibres had broken into several parts and could not be handled further. Considering that the initial platinum content of [Pt(NH2eh)4][PtCl4] is 37.2% w/w, it was unfortunate that plasma exposure for 1 h did not yield pure elemental platinum, which would have enabled the fabrication of platinum fibres by simple processing of a precursor. Consistently, the plasma-treated fibres did not exhibit electrical conductivities in the metallic range.

Like common organic polymers, the quasi-one-dimensional platinum compounds [Pt(NH2eh)4][PtCl4] and [Pt(NH2dmoc)4][PtCl4] can be processed to fibres by electrospinning from solution. The thickness and length of the resulting thin crystalline fibres depend on various process parameters such as solution concentration of the platinum compounds, applied voltage, and the distance between the polymer solution and the collector. The longest fibres (up to 30 cm) were obtained with [Pt(NH2eh)4][PtCl4]. The fibres were rather flexible and allowed the formation of loops. X-ray diffraction patterns indicated that the linear supramolecularly arranged coordination units were oriented along the axis of the fibres, which, accordingly, showed highly anisotropic optical properties. The fibres showed electric conductivities in the semiconductor range. Gratifyingly, the conductivities along the axis of the fibres exceeded the values for the non-oriented bulk materials by 2–3 orders of magnitude.

Given that films of [Pt(NH2dmoc)4][PtCl4] with oriented fibres are capable of functioning as the active semiconducting layer in, for example, FETs, Magnus' salt derivatives might possibly pave the way for mass-produced “plastic electronics” (16). Other potential applications include environmentally stable semiconducting fibres (8, 16).

The authors are grateful to A. P. H. J. Schenning (Technical University Eindhoven, The Netherlands) for supplying the dmoc and to M. Müller (ETH Zürich) for the SEM studies.

Margherita Fontana is presently working at Ciba Speciality Chemicals in Basel as a Laboratory Head. She is leading projects in the development of colour materials for E-paper display applications based on electrophoretic particles as well as electrochromic materials. She is also involved in the characterisation of semiconducting materials and related devices.

Walter Caseri has been active as a Senior Scientist in the Institut für Polymere at the ETH Zürich, Switzerland, since 1996. He is involved in research and teaching. His interests are in polymers containing both organic and inorganic components (polymeric structures with inorganic backbones, nanocomposites and polymers at inorganic interfaces).

Paul Smith has been Professor of Polymer Technology at the ETH Zürich since 1995. His interests lie in the development of advanced polymer materials, polymer phase behaviour, mechanical properties of polymer systems, electrically and optically active polymers, and polymer/metal systems.