Challenges in Catalysis for Pharmaceuticals and Fine Chemicals

Challenges in Catalysis for Pharmaceuticals and Fine Chemicals

Around eighty participants with an interest in homogeneous catalysis came together in London on 6th November 2007 to discuss “Challenges in Catalysis for Pharmaceuticals and Fine Chemicals” at a symposium organised by the Society of Chemical Industry Fine Chemicals Group and the Royal Society of Chemistry Applied Catalysis Group. In response to increased focus on environmental issues and sustainability for the preparation of active pharmaceutical ingredients and fine chemicals, industry and academia are collaborating to identify catalytic processes that will reduce waste, energy demand and safety hazards by replacing the use of some stoichiometric reagents. This symposium highlighted some of the areas where progress is being made. A series of seven oral presentations was supported by a poster session where students presented their work on environmental improvements in chemistry. Content involving platinum group metals is described here.

Peter Dunn (Pfizer, U.K.) reviewed the background to this meeting and in particular the role of the American Chemical Society Green Chemistry Institute Pharmaceutical Roundtable (1). This forum allows an exchange of information between the major pharmaceutical companies with regard to improving the sustainability of manufacturing for active pharmaceutical ingredients. A survey of the reactions used in such preparations (2) provided the background information for identifying those areas where improvements were most needed. The results of these further discussions were also published (3). The topics were divided between the categories of common reactions requiring better reagents, and more aspirational reactions where new technology is required for industrial application. A priority ranking was used to highlight five examples in each category, for example, amide formation avoiding poor atom economy reagents was the item with the highest priority in the former category. The Roundtable has the capability to offer research grants to meet these objectives, with two programmes already operating (one in hydrogenation of amides and one in C–H activation for biaryl coupling) and further grants are on offer for 2008 and 2009.

Rhodium-catalysed asymmetric hydrogenation is one of the most commonly used homogeneous catalysis processes in the pharmaceutical industry. Nevertheless, Johannes de Vries (DSM Pharmaceutical Products and University of Groningen, The Netherlands) noted that there are relatively few examples due to a number of obstacles: long process development time (requiring improved, automated screening); high cost (requiring cheaper metals, simpler ligands and greater catalyst turnover numbers); limited tolerance for substrate variations and lengthy or inefficient routes for substrate preparation. Improvements can be achieved through a modular approach to ligand design, allowing ligand libraries to be generated by automated equipment. Ligand design can thus become part of a wider, automated screening process. The development of chiral monophosphoramidite ligands, 1, (4), which have proved to give enantioselectivities equivalent to or even better than those of the well known chiral bisphosphine ligands in Rh-catalysed asymmetric hydrogenation, was used to illustrate this. Another elegant approach to the design of bidentate ligands is the use of supramolecular chemistry to bring two molecules together so that the donor atoms are brought into the correct positions for coordination. 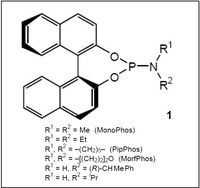 While much attention has been given to developing catalysis for particular substrates, often insufficient attention has been paid to the impact of preparation of these substrates on the overall process efficiency. Thus the benefits of the catalytic step may be nullified if the synthesis and purification of the substrate add extra steps. For example, the preparation of pure E- or Z-vinyl compounds is often difficult and the purification of imines may present an issue. This issue merits greater attention to prevent subsequent effort on the optimisation of the catalytic step being wasted.

The lack of generality in application of catalytic methods can also be a limiting factor. For example, unfunctionalised olefins may give low enantioselectivity, and molecules containing sulfur donors may act as catalyst poisons. No effective catalyst is available for homogeneous hydrogenation of substituted aromatic compounds, and the more reactive heteroaromatic compounds generally give poor enantioselectivity.

One area where synthesis of the substrate has a major impact on catalytic chemistry is the use of aryl boronic acid derivatives as coupling partners in palladium-catalysed biaryl synthesis (Suzuki-Miyaura reaction). The process would be greatly simplified if C–H activation of aromatic groups could be achieved directly. This was discussed by Robin Bedford (University of Bristol, U.K.). Significant progress in this area has been made for intramolecular systems, while, with the aid of directing groups, some intermolecular reactions can also be carried out effectively. The initial report of Pd-catalysed cyclisation of 2-substituted halogenoarenes to form dibenzofurans and related heterocycles (intramolecular 5-membered ring formation) appeared in 1984 (5). Statistically it is more difficult to form larger rings, but 7- and 8-membered ring formation has now been reported. Bedford, himself, has shown how new rings can be formed by combining sequential Pd-catalysed aryl bromide and C–H activation reactions (6). The major challenges to the implementation of chemistry based on C–H activation are selectivity (both with regard to single versus multiple substitution and regioselectivity), catalyst loading/activity, and the complexity and corresponding high cost of the catalysts. However, progress is being made on each of these issues.

Hydroformylation is a well-established chemistry in the bulk preparation of aldehydes. The development of the Rh-catalysed LP OxoSM process was recently reviewed in this Journal (7, 8). However, the reaction is little used in the pharmaceutical industry. Graham Meek (DowpharmaSM, U.K.) described his company's efforts to make hydroformylation more attractive to the pharmaceutical industry. Having inherited Union Carbide's expertise following that takeover, Dowpharma have further developed a range of bisphosphite ligands, particularly one known as BIPHEPHOS, 2, (9), that gives satisfactory rates and high yields of linear aldehydes for a wide variety of substrates. Reactions can typically be carried out at 3 bar pressure and 80°C with a substrate:catalyst ratio of around 1000. The reactivity of the aldehyde product means that under certain circumstances tandem reactions can be carried out. Thus, for example, hydroaminomethylation (the combination of hydroformylation and reductive amination) may be used to synthesise secondary and tertiary amines from olefins. 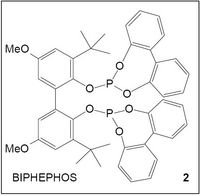 For enantioselective hydroformylation, early work studied the reaction of styrene, with BINAPHOS a preferred ligand. More recently, chiral phosphites and diazaphospholanes have been developed by Dowpharma. The enantioselectivity of these reactions is often highly sensitive to minor structural changes in the ligand, so the availability of an extensive ligand library of these compounds is a distinct advantage.

The synthesis of amides with minimal waste is a highly desired transformation. Andy Whiting (University of Durham, U.K.) described a range of studies aimed at achieving this from carboxylic acid and amine substrates. Because of the difficulties of this direct approach, various other routes to amides are being developed. For example, the reaction of amines and alcohols to form amides using ruthenium-pincer catalysts has been reported by Milstein (10). So far, the reaction has limited scope for substrates, being sensitive to steric hindrance at the α-position of either partner and not giving the desired product with secondary amines. Amides can also be formed by aminocarbonylation of aryl halides. Buchwald has recently reported (11) that earlier work on this Pd-catalysed reaction of aryl iodides and bromides can be extended to aryl chlorides in the presence of sodium phenoxide. The reaction proceeds via the initial formation of the phenyl ester, which then undergoes a phenoxide-catalysed acyl transfer reaction to form the amide.

The asymmetric addition of –NH and –OH functions to C=C bonds was reviewed by Mimi Hii (Imperial College London, U.K.). Alternative routes to the chiral amine and alcohol products include hydroboration or hydrogenation, but conditions for more direct reaction are desirable. The majority of the research has been carried out on the hydroamination reaction. As usual, the intramolecular reaction was performed first with the intermolecular enantioselective reaction being reported by Togni in 1997 (12) using iridium(I) catalysts, but later work by Hartwig (13) and by Hii (14) has shown that significantly improved results can be obtained with Pd catalysts. Thermodynamics provides a constraint for these conversions, since there is little driving force for the reaction (ΔG ∼ 0). Only limited yields of products are possible in some cases. The reaction of activated alkenes is also known as the aza-Michael reaction. In this case, reaction of primary aromatic amines has been achieved under mild conditions (< 60°C in toluene).

Compared to hydroamination, the addition of –OH has received little attention. Cyclisation by enantioselective –OH addition (an intramolecular, asymmetric version of the Wacker reaction) was first reported in 1981 (15) with modest enantiomeric excess. More recent work by Hayashi (16) and others has improved these results, but examples of this chemistry are still limited.

In the poster presentations, Asma Qazi (Queen Mary University, London, U.K.) described various forms of Pd(II) immobilised on silica. While Pd coordination to sulfur donors gave materials with low leaching, they showed low activity in Suzuki coupling (catalyst loading ca. 5 mol%). Better activity was seen for an ethylphosphatrioxaadamantane Pd catalyst that was effective at 0.1 mol%. Direct arylation for heterocycles is often more efficient than for aryl compounds due to the strong directing effect of the heteroatom. The C-5 arylation of thiazoles was reported by Gemma Turner (University of Edinburgh, U.K.). This reaction can be carried out with Pd catalysis in only 12 hours at 60°C using water as solvent.

Nathan Owston (University of Bath, U.K.) reported on studies of metal-catalysed amide preparation from alcohols. Catalyst loadings can be significantly reduced by changing from an Ir catalyst to a Ru one, and the methodology has now been adapted to allow formation of a variety of acyl derivatives (e.g. esters). Xiaofeng Wu (University of Liverpool, U.K.) described a monotosylated ethylenediamine Ir(III) complex which can be used as catalyst for hydrogenation of aldehydes in water as solvent (using hydrogen gas or by transfer hydrogenation).

It is clear that improved catalytic chemistry will be required to replace wasteful stoichiometric routes for pharmaceuticals and fine chemicals in the future. Improvements to catalytic processes will involve adaptation to more readily available substrates, simpler ligand preparation and the minimisation of metal costs through lower catalyst loadings. It is hoped that developments towards these goals will provide the focus for further meetings on this topic in the future, to be organised by the Society of Chemical Industry and the Royal Society of Chemistry. 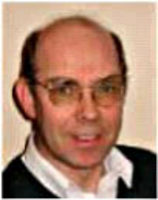 Chris Barnard is a Scientific Consultant in the Liquid Phase Catalysis Group at the Johnson Matthey Technology Centre, U.K., with interests in homogeneous catalysis employing the platinum group metals. He is also interested in the application of platinum compounds as cancer therapy.