Challenges in Catalysis for Pharmaceuticals and Fine Chemicals II

Challenges in Catalysis for Pharmaceuticals and Fine Chemicals II

On 20th October 2009 around 100 delegates from the chemical industry and academia met in London, UK, for the second meeting on “Challenges in Catalysis for Pharmaceuticals and Fine Chemicals”. The event was organised jointly by the Society of Chemical Industry Fine Chemicals Group and the Royal Society of Chemistry Applied Catalysis Group. It followed the very successful first event that took place in 2007 and was reviewed in this Journal (1).

Topics covered included: the latest developments in coupling redox processes for carbon–carbon bond formation; cross-coupling reactions; nitrile hydrogenation; organocatalysis; amide bond formation by catalysis and novel techniques for development of catalysed reactions. Like its predecessor, this meeting also focused on one of the principles of ‘green chemistry’: in this case, finding ways of minimising chemical waste by choosing those reagents and catalysts that produce the most atom-efficient processes. A series of seven oral presentations from speakers representing British and international academic institutions and the pharmaceutical industry was supported by a poster display during lunch. John Birtill (Consultant in Catalyst Technology, UK) of the RSC Applied Catalysis Group made the closing remarks.

The following is a brief review of the research work on platinum group metal (pgm)-catalysed reactions presented at the meeting.

John Blacker (University of Leeds, UK) introduced the role of the Institute of Process Research and Development (iPRD) at the University of Leeds, a collaboration between academic and industrial chemists and engineers, which aims to advance process technologies in areas such as synthesis, catalysis, crystallisation, intensification and manufacture. Inspired by the great efficiency and complexity of biocatalytic pathways, chemists have tried for many years to develop catalysts able to emulate nature's processes. Recent advances in the alkylation and arylation of nitrogen- and oxygen-containing functional groups, C–C bond formation, aromatic heterocycle formation, protection and de-protection, and reduction and resolution were described with a few examples.

Catalysed by iridium complexes, amines can be alkylated with other amines (Scheme I) (2), or alcohols (3), and aldol condensations can occur between alcohols (4) via an in situ oxidation to carbonyl derivatives. Homogeneous rhodium-based catalysts such as [Rh(COD)Cl]2–tBu-JOSIPHOS are effective in the reduction of unprotected β-keto-enamines to β-keto-amines (5). Nanocatalysts were also described as a new area of intense research. The size of the particles gives rise to novel physical properties (including modified diffusional behaviour and zeta potential, quantum photo and electronic effects, and quantum tunnelling) that can be exploited in catalysed processes. Examples using palladium and rhodium nanocatalysts were given, including a chiral diphosphate-modified rhodium(0) nanoparticle catalyst for use in styrene hydroformylation (6).

Matthias Beller leads a research group at the Leibniz-Institut für Katalyse e.V. (Universität Rostock, Germany). In the last decade they have contributed to the industrial application of three catalyst systems. CataCXium® A, 1, is an electron-rich, non-pyrophoric phosphine ligand, useful in reactions involving aryl halide activation such as palladium-catalysed carbonylations (7), whereas a group of phosphine ligands named cataCXium® P, 2, (8) have found application in the palladium-catalysed hydroxylation (9) and amination (10) of aryl halides. The third system uses potassium hexacyanoferrate(II) (K4[Fe(CN)6]) in conjunction with Pd(OAc)2 (11, 12) to prepare benzonitriles from aryl halides on an industrial scale by a catalysed process (Scheme II). It has seldom been possible to achieve this, as cyanide sources are usually highly toxic, with the associated negative impact on the environment and implications for health and safety. Cyanides are also efficient catalyst poisons. Professor Beller described the advantages of K4[Fe(CN)6], a complex characterised by low toxicity and low manufacturing cost: properties that make it a convenient choice for palladium- and copper-catalysed processes even on an industrial scale. 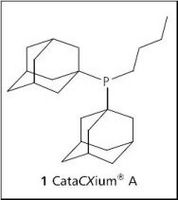 Paul Murray (AstraZeneca, UK) described the use of principal component analysis (PCA) and experimental design to optimise palladium-catalysed coupling reactions, including a redox neutral coupling reaction, a Buchwald-Hartwig reaction and a Suzuki reaction. AstraZeneca is working in collaboration with the University of Bristol, UK, on a ‘predictive catalysis’ project with the aim of developing computational descriptors for ligand and catalyst attributes. The optimisation of a catalysed process is complicated by the number of variables at play (including, for the type of reactions being studied, the choice of catalyst precursor, phosphine complex, amines, solvent, and other reaction conditions). The descriptors are used in a PCA that is ultimately a variable reduction procedure. By reducing the redundancy in the data set, PCA can guide the chemist to the most efficient way to explore the chemical space.

Michael Krische (University of Texas at Austin, USA) focused his lecture on the formation of C–C bonds via hydrogenation and transfer hydrogenation, stressing the fact that these transformations provide more atom-economic processes than the classic C–C bond formation reactions such as aldol condensation. These hydrogenation and transfer hydrogenation reactions are catalysed by rhodium and iridium cationic complexes such as Rh(COD)OTf/(R)-Tol-BINAP or (R)-xylyl-WALPHOS (13) or [Ir(COD)Cl]2/(R)-Cl,MeO-BIPHEP (14). For example, aldehydes can be prepared by reacting alkenes with carbon monoxide and hydrogen, while α,β-unsaturated ketones in the presence of hydrogen and the catalyst can undergo aldol condensations with virtually no waste. Importantly, primary alcohols can be used in place of aldehydes in these condensations, by exploiting the fact that the iridium catalyst is able to convert them to the aldehyde in situ (14). This is an advantage considering that aldehydes are usually susceptible to oxidation and polymerisation.

Atom economy was also the main theme of the presentation by David Cole-Hamilton (University of St Andrews, Scotland, UK). Cole-Hamilton's group has developed a bidentate phosphine ligand (bis-(di-tert-butylphosphinomethyl)benzene, 3) (15) which can be used with [Pd2(dba)3] in palladium-catalysed carbonylations.

Barbara Villa-Marcos (University of Liverpool, UK) presented work on direct asymmetric reductive amination of ketones and amines to chiral amines, Scheme III (17). The reaction uses a catalytic system formed by a combination of an iridium(III)-diamine complex and a chiral phosphate counteranion and proceeds via a metal-Brønsted acid cooperative mechanism.

The fine chemical and pharmaceutical industries' need for robust, environmentally friendly and safe processes has proven to be an invaluable driving force in catalyst research. Researchers both in academic institutions and in industry have made significant progress in recent years and today many examples of platinum group metal catalysts matching enzyme efficiency are a reality. This pace of continuous innovation in the field of catalysis is sure to provide new and exciting material for future “Challenges in Catalysis” meetings.

The next meeting will be held during the second half of 2011, at a time and location to be arranged. 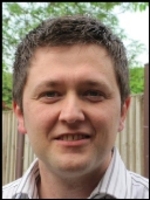 Fabrizio Nerozzi is a Team Leader at Johnson Matthey Catalysis and Chiral Technologies based in Royston, UK, since 2009. Previously he worked at GlaxoWellcome (later GlaxoSmithKline) in Stevenage, UK, as a Medicinal Chemist, and later as a Team Leader. He graduated in Chemistry at the University of Bologna, Italy, in 1998.