A cost-effective method for producing 0.1–50 nm nanoparticles of pgms, specifically Pt, is claimed. Aerobically-cultured iron-reducing bacteria such as Shewanella putrefaciens are contacted under aerobic conditions with a solution of Pt ions and either an organic acid or H2(g) as electron donor. Pt nanoparticles are precipitated on the surface of the bacterial cells, which can in turn be deposited on a support such as diatomaceous earth, and are suitable for use as hydrogen isotope exchange reaction catalysts.

Two classes of catalysts for Hg removal from industrial off-gas are described: metallic Ir or 5–10 wt% Ir-Pt alloy, which are corrosion resistant; and partially combusted coal with 20–80 wt% ash, which is disposable. Both are easily regenerated and are found to be activated in situ by exposure to HCl and Cl2. The catalysts promote the oxidation of Hg to HgCl2, allowing it to be removed by conventional scrubbers or precipitators.

Phosphinate Ru complexes of general formula 1 and their use as catalysts for olefin metathesis and RCM are claimed. Typical molar ratios of catalyst to olefin are ≤0.5, preferably ≤0.01. The complexes may deliver benefits such as better yield, improved chiral purity and less metal contamination of the product.

A process for the hydrogenation of imines at 10–70°C and 10–100 bar in the presence of 0.001–5 mol% of an Ir-based catalyst with one ditertiary phosphine ligand and 0.01–1 mol% of a co-catalyst with a C–halogen bond is claimed. Specifically, the process can be used for the asymmetric hydrogenation of a prochiral ketimine, in the presence of a chiral Ir catalyst of formula for example 2, with one diphosphine ligand of formula for example 3, to produce an optical isomer of an amine with ee >80%. 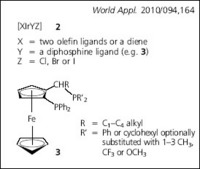 Hydrogenolysis of polyalcohols such as sorbitol to lower diols, specifically propylene glycol, is conducted by contacting the alcohol with a suspension of a heterogeneous Os catalyst in water in the presence of a base such as Ba(OH)2 and in the absence of any phosphine, at 30–90 bar and 180–250°C for 1–6 h. The Os catalyst is prepared by reducing OsCl3 or OsO4 with H2 at 50–300°C to metallic Os dispersed at 1–6 wt% on a high surface area (>700 m2 g−1) support such as activated C or zeolite NH4Y.

A process for the production of H2 from water uses Ru-based photocatalysts selected from soluble compounds of Ru with OAc− and Cl− or BF4−, or insoluble compounds of Ru with terephthalate and Cl−, BF4−, PF6− or Br−. These are added to water containing a solution of a photosensitiser such as Ru(bpy)3Cl2, a sacrificial electron donor such as disodium EDTA, and an electron-conducting substance such as methylviologen, and the mixture is irradiated with visible light of wavelength >420 nm. Depending on the compound, TONs of 3.9–93.4 were demonstrated experimentally.

A catalyst system comprising a close-coupled catalyst, 1, and an underfloor catalyst, 2, is formulated to prevent oxidation and deactivation of Rh under fluctuating air:fuel ratios by restricting Rh-doped Ce-Zr-Nd mixed oxide to catalyst 2. The dissolved Rh is then reduced to active metal by HC and CO passing through catalyst 1 unreacted. Catalyst 2 further contains Pt/Al2O3 to convert HC to CO for more effective reduction. Catalyst 1 has a lower layer containing undoped Ce-Zr-Nd mixed oxide and supported Pd, and an upper layer with supported Rh.

An oxidation catalyst for use in a catalytic system to control lean-burn engine emissions and its method of production are claimed. A washcoat of Pt and/or Pd is applied to the first zone of a substrate. A mixture of 50–100% Pt and Pd is applied to the rear or second zone of the substrate with an additional NOx storage material such as BaO and/or K2O. Zone 1 oxidises CO and HC, while zone 2 oxidises NO and stores NO2 until it can be released for downstream SCR (which occurs optimally at equimolar NO:NO2).

A PtP2 PEMFC catalyst with a cubic crystal structure and the method of its manufacture are claimed, with the catalyst described to exhibit enhanced activity and stability in an acidic environment. The PtP2 is formed by combining Pt catalyst with a phosphiding agent such as elemental P, PH3(g), trioctylphospine or a phosphide, and may form a surface layer on a Pt or Pt-transition metal core, where the transition metal is one or more of Co, Fe, Ni and Cu.

Pt, a first alloy metal and a second alloy metal are successively deposited on a carbon support by reduction of appropriate precursors and alloyed by subsequent calcination. Alloy composition is: 40–60 mol% Pt, 5–30 mol% of one or more of Ir, Rh and Pd, specifically Ir, and 20–50 mol% of one or more of Ti, Mn, Co, V, Cr, Ni, Cu, Zr and Fe. The alloy has an average particle size of <60 Å, and a lattice constant of ∼3.78–3.83 Å.

A low-pH method of Pd salt addition to tobacco for the removal of polycyclic aromatic hydrocarbons from smoked product minimises the number of processing steps required. A solution of Na2PdCl4, K2PdCl4 or (NH4)2PdCl4 is sprayed onto tobacco cut filler at 12–45% oven volatiles and at a mass loading of 0.01–0.15% relative to tobacco weight. The ratio of Pd:Cl is controlled to maintain >99% Pd solubility.

A wafer with two or more layers of different conductivity types is formed by: (a) depositing a 1 nm to 10 μm-thick layer of Pd on the first main side of an n-doped wafer; (b) irradiating this side to create defects at a depth controlled by the energy of radiation; and (c) diffusing the Pd into the wafer at 600–650°C to create a p-doped layer by replacing the defects. The process can be repeated at different depths and on the opposite side, and lateral variation can be achieved by using a thicker layer of Pd (≤150 μm) as a radiation mask. Electrical contacts are then created on opposite main sides of the wafer to form a power semiconductor device.

A battery based on the principle of an air battery has an Al plate anode and a Pt plate cathode, both immersed in a non-aqueous ionic liquid as the electrolyte, and separated by a gel membrane which is impermeable to ions other than OH−. The electrolyte is a mixed molten salt of 1-ethyl-3-methylimidazolium chloride and anhydrous AlCl3, in a molar ratio of 1:2 on the anode side of the membrane, and 2:1 on the cathode side. O2 is bubbled over the Pt plate from a gas introduction pipe to facilitate the electrochemical reaction, which is found to proceed safely and efficiently.

A method and material for forming an hermetic seal between ceramic and titanium sections of the housing of an implantable medical device is claimed. An interlayer comprising a Pd foil and a Ti foil, or a Ti foil sandwiched between two Pd foils, is placed at the interface of the two sections and pressure is applied during heat treatment under vacuum or inert gas. After melting and subsequent cooling, the interlayer forms an eutectic bond with the Ti and wets the ceramic for a complete seal.

Ir complexes containing a pyridyl triazole ligand with at least one substituent on the pyridine ring, for example 4 and 5, exhibit improved phosphorescent quantum yields, particularly at short wavelengths. Wavelengths of peak intensity are typically ∼456 nm and ∼486 nm. The Ir complexes are used in the emissive layer of OLEDs, with or without a host material. Synthesis methods are described. 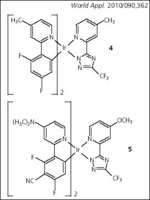 A pre-layer is formed on the binding sub-layer of a thermal barrier coating on a turbine blade and allows for efficient localised repair of the coating without stripping or modification. A suspension of pgm powder, specifically Pt, in water, oil or hydrocarbon liquid is applied to an aluminide sub-layer using a brush or spray gun or by dip-coating, and is diffusion heat-treated to form a layer of thickness 1–30 μm, preferably 2–10 μm.