“Electrolytes for Lithium and Lithium-Ion Batteries”

“Electrolytes for Lithium and Lithium-Ion Batteries”

“Electrolytes for Lithium and Lithium-Ion Batteries”, published in 2014 by Springer, is Volume 58 in the Modern Aspects of Electrochemistry series. The volume is edited by T. Richard Jow, Kang Xu, Oleg Borodin and Makoto Ue. In the preface the Editors set out their purpose in compiling this volume, which was to provide a comprehensive overview of electrolytes for lithium-ion batteries. It covers electrolyte research and development in the last ten years and may be used as a foundation for future work and directions. The volume succeeds in covering the multifaceted area of electrolytes in a logical and highly comprehensive manner.

Chapter topics include lithium salts, advances in solvents, additives and ionic liquids, then progressing to understanding of the cathode and anode interphases, reviewing various characterisation approaches, a discussion of modelling approaches and finally future technologies such as lithium air batteries.

Chapter 1, ‘Nonaqueous Electrolytes: Advances in Lithium Salts’ by Wesley A. Henderson (Pacific Northwest National Laboratory, USA) begins with information on desirable salt properties such as ionic conductivity, solubility, stability (to oxidation and hydrolysis) and ability to form an optimal interphase at the electrodes. The chapter then provides an extremely comprehensive coverage of the different types of lithium salts and their properties, ranging from established salts such as lithium hexafluorophosphate (LiPF6) and lithium bis(bistrifluoromethanesulphonyl)imide (LiTFSI) to more advanced examples including organoborates, phosphates and aluminates. Structure diagrams are included for all examples which greatly aid the reader and the chapter concludes by highlighting adoption criteria for new salts; the chapter also includes over 700 references.

Chapter 2, ‘Nonaqueous Electrolytes with Advances in Solvents’ by Makoto Ue, Yukio Sasaki (Tokyo Polytechnic University, Japan), Yasutaka Tanaka (Shizuoka University, Japan) and Masayuki Morita (Yamaguchi University, Japan), reviews the important solvent properties including high electrolytic conductivity, high chemical and electrochemical stability, wide operating temperature range and high safety. Phase diagrams for a range of solvent mixtures are shown and properties such as viscosity, conductivity and stability are discussed for a range of cyclic and linear carbonates and fluorinated versions thereof. The typical requirement to blend at least two electrolytes together to achieve optimal properties, for example a combination of a cyclic carbonate (high dielectric constant to aid salt dissociation) and a linear carbonate (to lower viscosity) is discussed, along with benefits of fluorinated solvents to increase electrochemical performance and stability, use of organoborates to reduce weight, cost and toxicity and the addition of phosphates as flame retardants. Polymer gel electrolytes and sulfur containing solvents are also reviewed.

Chapter 3, ‘Nonaqueous Electrolytes and Advances in Additives’ by Koji Abe (UBE Industries Ltd, Japan), is partly told from a historical perspective, but also classifies the different additive types according to their function and safety. The intentional addition of additives to control the solid electrolyte interphase (SEI) by forming a controlled thin layer with lower resistance to Li mobility and additives for the formation of a stable cathode interphase are discussed. Safety aspects such as addition of species which can prevent thermal runaway via surface polymerisation and additives such as redox shuttles (for example, anisoles) and other approaches to overcharge protection and flame retardant additives such as phosphates are also reviewed.

Chapter 4, ‘Recent Advances in Ionic Liquids for Lithium Secondary Batteries’ by Hajime Matsumoto (National Institute of Advanced Industrial Science and Technology (AIST), Japan) describes the beneficial properties of ionic liquids (ILs) such as reduced flammability and volatility and covers examples of their exploratory usage in full-cells. Important recent developments are the formulation of new anions (in particular asymmetric versions) which impact viscosity and improve mobility/conductivity, to achieve performance comparable to conventional electrolytes using ILs. The high stability reported for ILs in individual component analysis (thermal decomposition) is also shown to be reduced in the presence of active battery components, illustrating the importance of realistic testing scenarios.

Chapter 5, ‘Interphases Between Electrolytes and Anodes in Li-Ion Battery’ by Mengqing Xu, Lidan Xing and Weishan Li (South China Normal University) covers the anode electrolyte interphase (referred to as the SEI). It begins with a historical overview of initial work with Li anodes and graphite highlighting how the unstable interphase formed with graphite and propylene carbonate (PC) electrolytes hampered initial studies and was revolutionised by the change to ethylene carbonate (EC) and other electrolytes which form a stable SEI with graphite anodes. The mechanisms of SEI formation (two-dimensional (2D) and three-dimensional (3D)) and reduction products for various linear and cyclic carbonate solvent species that create the SEI are discussed and the energy barriers to Li motion through the interphase described (Figure 1). In addition various characterisation techniques (including nuclear magnetic resonance (NMR) and X-ray photoelectron spectroscopy (XPS)) to explore the SEI composition are discussed. The extension to more advanced anodes such as silicon and additives to aid SEI formation for various systems are also covered. 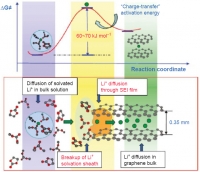 Chapter 6, ‘On the Surface Chemistry of Cathode Materials for Li-Ion Batteries’ by Susai Francis Amalraj, Ronit Sharabi, Hadar Sclar and Doron Aurbach (Bar-Ilan University, Israel) provides a concise and practical introduction to the different cathode chemistry types (including layered oxides, spinels and olivines) and diagnostic methods to assess the cathode-electrolyte interphase. Issues such as metal dissolution from the cathode and subsequent precipitation at the anode (leading to performance loss) and the use of additives or active materials coatings to control the cathode interphase and limit unwanted side reactions are described. References to greater details in a number of their own publications are also provided.

Chapter 7, ‘Tools and Methodologies for the Characterization of Electrode–Electrolyte Interfaces’ by Jordi Cabana (Lawrence Berkeley National Laboratory, USA and University of Illinois, USA), provides a thorough and authoritative introduction to the various techniques to analyse electrode-electrolyte interfaces. Electrochemical techniques, various types of spectroscopy (Raman, infrared (IR), XPS, NMR, X-ray and neutron techniques), ellipsometry and microscopy are all discussed with illustrative examples. To date many experiments have been made ex situ, necessarily requiring a washing and electrolyte removal step that may influence the surface, so advances in cell design to allow measurement in the presence of electrolyte are key to future progress. Also, the importance of combining complementary techniques to fully assess the interface properties is stressed along with possible overlaps with other areas in electrocatalysis.

Chapter 8, ‘Molecular Modeling of Electrolytes’ by Oleg Borodin describes the different methodologies for the modelling of electrolytes and stresses the importance of considering clusters and systems rather than just the individual molecules and components. Validation of models against experimental data and also the dangers of combining experimental results from different sources (where details such as experimental procedures and reference scales may vary) are highlighted. The use of molecular dynamics (MD) simulations to explore Li mobility within the SEI and the different anode substrates (graphite, lithium titanate and lithium lanthanum titanate) and hence decouple Li mobility in SEI from Li desolvation effects is described.

Chapter 9, ‘Prediction of Electrolyte and Additive Electrochemical Stabilities’ by Johan Scheers and Patrik Johansson (Chalmers University of Technology, Sweden), covers different approaches to modelling the potentials of oxidation and reduction of solvent, salt and additive components of the electrolyte. Significant variations in predicted trends are found depending on the reaction products (linear or cyclic), route, mechanism and intermediates. Again issues with cross comparison against different experimental results in the literature are pointed out, including varying sweep rates, working electrodes, cut off currents and also variations in the reference energies. In the case of redox shuttle, accurate predictions of potentials are particularly important, as their behaviour links to battery safety. The advantages of increasing computer power are also discussed, as more complex systems may be modelled and in particular realistic electrode materials depictions, surfaces and multicomponent systems can be explored more accurately.

The book closes with Chapter 10, ‘Aprotic Electrolytes in Li-Air Batteries’ by Kah Chun Lau, Rajeev S. Assary and Larry A. Curtiss (Argonne National Laboratory, USA). Lithium air batteries in theory present the possibility of exceptionally high capacities due to their low mass constituents. However, the lack of stability of current electrolytes in the presence of the superoxide radical generated in the cathode oxygen reduction reaction is thought to be the greatest barrier to success in these systems. For many years common Li-ion electrolytes such as PC were used in lithium air systems. However, superoxide attack results in formation of irreversible lithium carbonate species, rather than the desired lithium peroxide (Figure 2). This chapter summarises the characterisation methods used to confirm the unsuitability of PC and the somewhat improved results with ether based solvent and stresses the importance of understanding the reaction mechanisms and of interlinking theory and experiment to enable the search for an improved electrolyte system.

Throughout the book certain themes emerge, including the importance of carefully correlating experimental results with modelling data and addressing multicomponent systems under realistic conditions rather than considering the individual constituents in isolation. It is also apparent that no one technique can ever provide all the answers. This book provides an excellent guide to the plethora of salt, electrolyte and additive options and their functionalities and properties; the historical overview is also particularly helpful to those who are new to the field.

In summary, this book will be useful to battery researchers in academia and industry, providing historical context, reference information on a wide range of electrolyte components and their functionality and highlighting directions for further work and the challenges that lie ahead. The use of examples to illustrate materials properties, interplay between components, the different analytical techniques and modelling approaches is particularly helpful along with the large number of literature references cited on the different topics.

Electrolytes for Lithium and Lithium-ion Batteries 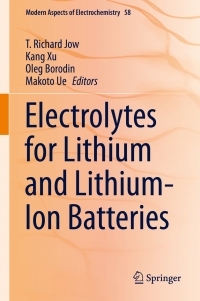 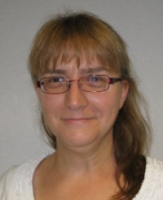 Dr Sarah Ball is a Senior Principal Scientist at the Johnson Matthey Technology Centre, Sonning Common, UK. In the last two years she has been involved in work on lithium air and lithium-ion batteries. Previously she was involved in fuel cell research on novel cathode materials including assessment of electrochemical stability, performance and properties.