“Membrane Technologies for Water Treatment: Removal of Toxic Trace elements with Emphasis on Arsenic, Fluoride and Uranium” is the first volume of a book series entitled Sustainable Water Developments – Resources, Management, Treatment, Efficiency and Reuse. The book presents chapters on a wide range of membrane technologies that have been used to remove toxic trace elements to below the limits for drinking or irrigation water.

Chapters have been written independently by scientists working on particular membrane technologies. This leads to some variability in the approach and to some repetition of introductory content, but also means that it is easy for readers interested in a particular technology to focus quickly on the areas of greatest interest. Most chapters start with an introduction to the membrane process before reviewing its use to remove toxic trace elements. Some chapters address all three elements of concern, others focus on one alone.

The book is divided into three parts: Part I ‘Generality on Arsenic, Fluoride and Uranium’, Part II ‘Traditional Membrane Processes’ and Part III ‘New Trends in Materials and Process Development’.

About Fluoride, Uranium and Arsenic in Water

Part I, written by the editors, consists of one chapter entitled ‘Fluoride, Uranium and Arsenic: Occurrence, Mobility, Chemistry, Human Health Impacts and Concerns’. It takes each element in turn and summarises the basic chemistry, the presence in the environment (with a map), the concentrations commonly found, the toxicity and the species present at different pH values. The choice of these specific elements over other toxic trace elements is not explained, but the chapter is useful background for researchers new to the field.

Part II is made up of five chapters written by different groups. Each chapter focuses on a different membrane technology, following an order of decreasing pore size. Some authors choose to introduce the process in some detail before reviewing the literature on the removal of the toxic element(s); others move swiftly to the literature review.

In Chapter 2, ‘Arsenic Removal by Low Pressure-Driven Membrane Operations’, Alfredo Cassano (Institute on Membrane Technology (ITM-CNR), Rende, Italy) briefly lists, with references, the conventional methods to remove arsenic from drinking water before explaining the basics of microfiltration and ultrafiltration. He then reviews studies on the use of these technologies to remove arsenic. As the species are too small to be retained by such large pore-size membranes, a modification of the feed is usually necessary and there is an interesting review of combined coagulation microfiltration and colloid-enhanced, micellar-enhanced and polyelectrolyte-enhanced ultrafiltration approaches (an example of micellar-enhanced microfiltration is shown in Figure 1). Negatively charged ultrafiltration membranes and electro-ultrafiltration are also covered. He concludes that low-pressure membrane technologies can successfully remove arsenic when combined with feed modification by coagulation or colloids.

Chapter 3, by Stefan-André Schmidt (Institute on Membrane Technology (ITM-CNR), and Karlsruhe University of Applied Sciences, Germany) et al., is on ‘Fluoride and Uranium Removal by Nanofiltration’. Non-membrane approaches are touched on, with references, before nanofiltration studies are reviewed. Two tables present a summary of the fluoride and uranium rejections obtained in different studies. High rejections are reported, but the authors note that fouling, cost and maintenance limit industrial scale applications at present. Priyanka Mondal (University of Leuven, Belgium) et al. in Chapter 4 ‘The Use of Reverse Osmosis (RO) for Removal of Arsenic, Fluoride and Uranium from Drinking Water’ introduce RO in some detail and then very briefly review the literature on arsenic, fluoride and uranium removal by this technique. In a departure from previous chapters, they then present an experimental study on arsenic and fluoride rejection by four commercial membranes. This leads to a slightly confusing chapter structure and conclusions. The review part comments that RO can effectively remove As(V) species to below the maximum contaminant level, but the neutral As(III) species is more problematic. The effect of pH on fluoride species and the impact on rejection (low for HF, high at basic pH) is also discussed in the fluoride review.

Chapter 5, ‘Electro-membrane Processes for the Removal of Trace Toxic Metal Ions from Water’, moves away from pressure-driven systems to electromembrane processes. Svetlozar Velizarov (Universidade NOVA de Lisboa, Caparica, Portugal) et al., discuss the application of Donnan dialysis and electrodialysis to remove uranium, fluoride and arsenic from contaminated solutions. Donnan dialysis, where transport is driven by a concentration difference across an ion-exchange membrane and an internally generated potential difference, receives particular attention as the absence of an external field is attractive for cost-sensitive applications. The authors also describe an ion-exchange membrane bioreactor where the targeted ionic species cross the membrane and are then converted by a microbial culture. A case study describes the removal of mercury by this approach; another case study looks at arsenic removal by a hybrid Donnan diffusion-coagulation process.

Part III is headed ‘New Trends in Materials and Process Development’. Some previous chapters have already crossed into this area in places. Mir Saeed Seyed Dorraji (University of Zanjan, Iran) et al., look at ‘Biosorbent Materials and Membranes for the Treatment of Toxic Ions from Water’ in the first chapter in this part, Chapter 7. Some of the materials described in this chapter are biopolymers such as chitosan obtained by deacetylation of chitin from crustacean shells. Others are obtained from biomass without chemical transformation. Some processes are also described, typically with separate adsorption and membrane separation steps, sometimes involving immobilised microorganisms. A table summarises the biosorption capacity of various biomass materials for fluoride, arsenic and uranium.

Liquid membranes, usually organic phases separating aqueous phases, are the subject of Chapters 8–10. The liquid membrane can be a bulk liquid, an emulsion or it can be supported in a porous material such as a microporous membrane. In Chapter 8, Prasanta Kumar Mohapatra (Bhabha Atomic Research Centre, Mumbai, India) describes ‘Liquid Membrane Separations of Uranium’. Organic extractants are listed and examples for several types are reviewed in detail. Wet process phosphoric acid and uranium recovery from seawater applications are described with process flowsheets. Many of the references are from the last century, and these underline the scale-up flux and fouling problems evoked in the ‘Conclusion and Perspectives’ paragraph.

The liquid membrane theme is continued in Chapter 9 ‘Supported Liquid Membrane Technology in the Removal and Recovery of Toxic Ions from Water’, where Raffaele Molinari and Pietro Argurio (University of Calabria, Arcavacata Di Rende (CS), Italy) explain the theory of transport across liquid membranes before reviewing their use for the removal of arsenic, copper, nickel(II), manganese(II), uranium and plutonium from waste or produced waters. Chapter 10, ‘Polymer Inclusion Membranes for the Separation of Uranium and Arsenic from Dilute Aqueous Solutions’ by Alexander M. St John (The University of Melbourne, Australia) et al., deals with polymer inclusion membranes for uranium and arsenic separation. In these membranes, the carrier, modifier and solvent are blended with a polymer to form a self-supporting membrane, which promises higher stability than standard supported liquid membranes. Low transport rates and membrane stability issues remain obstacles to this technology.

Chapter 11, by Jianfeng Song (Chinese Academy of Sciences, Shanghai, China) et al., is titled ‘Removal of Arsenic by Nanofiltration: A Case Study on Novel Membrane Materials’. An introduction to nanofiltration is followed by a table summarising existing literature on its use to remove As(V) and As(II). Chapter 3 in Part II had already looked at nanofiltration of fluoride and uranium. The novel membrane described in the case study is a commercial hollow fibre ultrafiltration membrane dip-coated with sulfonated polyetheretherketone. The performance for As(V) is reported, followed by a cost evaluation for a treatment system.

Evina Katsou (Brunel University, London, UK) et al. describe ‘Fate and Removal of Trace Metals/Metalloids and Fluoride from Urban Wastewater by Membrane Bioreactors: Pilot and Full-Scale Experiences’ in Chapter 12. After describing the mechanism and influential parameters, the authors summarise pilot studies from municipal wastewater for a wide range of elements. They conclude that membrane bioreactors generally present a small advantage over conventional activated sludge for metal removal. The removal is most effective when the metal is associated with particulates and colloids. The fouling layer often contributes to biosorption.

Chapter 13 ‘Membrane Distillation for the Treatment of Waters Contaminated by Arsenic, Fluoride and Uranium’ moves to another membrane technology, membrane distillation. Alessandra Criscuoli and Maria Concetta Carnevale (Institute on Membrane Technology (ITM-CNR)) describe the principle of this process, which is driven by a difference in vapour pressure, before reviewing its use for the removal of arsenic. Excellent rejections are obtained and this technique is insensitive to speciation. The few studies looking at membrane distillation of fluoride and uranium contaminated waters also showed quasi-total removal. However, the authors point out that the evaluations have largely been carried out at laboratory scale and energy requirements, stability, fouling and therefore costs have not been estimated.

The final chapter addresses ‘Removal of Inorganic and Organic Trace Contaminants by Forward Osmosis Membranes’. Forward osmosis (FO) is a membrane separation technology driven by a difference in osmotic pressure. Qianhong She and Chuyang Tang (Nanyang Technological University, Singapore) introduce mass transport and solute rejection in FO before straying a little from the subject of the book to review studies on trace organics. The following section on the removal of inorganic contaminants is based on a couple of studies on arsenic, calcium and boron, showing this technology has not been widely studied for this application. The rejections were higher in FO operation than in RO.

The book has chapters on all the major membrane technologies and their application to removing toxic trace elements, each chapter covering at least one of arsenic, fluoride and uranium. Taken together, the references for each chapter provide a very good resource for readers wanting to learn more about particular membrane technologies used in this field or a set of studies on toxic element removal.

In both Part II ‘Traditional Membrane Processes’ and Part III ‘New Trends in Materials and Process Development’, the majority of references are to laboratory-scale experiments in academic journals and the gap between the two parts does not feel very great. Membrane technologies are presented sequentially and independently. Although there is sometimes a discussion of competing technologies in individual chapters, in general it is up to the reader to synthesise the various studies and to look more into non-membrane approaches. 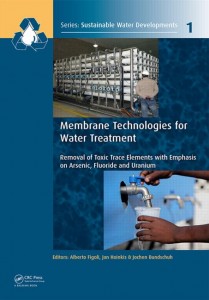 Nadia Permogorov is a Principal Scientist at Johnson Matthey Technology Centre in Sonning Common, UK. She works on membranes and membrane processes and their application across Johnson Matthey divisions. Her current particular research interests include ionomer membranes, nanofiltration and electrospun materials.