The World Hydrogen Energy Conferences (WHEC) are biennial events focusing primarily on the hydrogen for fuel cells sector. The 2016 event, the 21st in the series, was held in Zaragoza, Spain, from the 13th–16th June 2016 and attracted approximately 1000 delegates (mainly academic) from around 60 countries. The conference was organised by the Spanish Hydrogen Association on behalf of the International Association for Hydrogen Energy. 1134 accepted abstracts in eight parallel sessions covered a range of topics including:

Parallel poster sessions, a trade fair (Figure 1) and a ‘test and drive’ area were also included in the conference, where participants were able to drive a Toyota Mirai (the world’s first mass produced fuel cell electric vehicle (FCEV)) or ride in a BMW 5GT FCEV (Figure 2), as well as see a hydrogen refuelling station in operation. Highlights of the conference included sessions on fuel cell vehicles, the use of hydrogen in electricity grid balancing and alternative hydrogen carriers being considered in particular markets.

Attendees at the trade fair during WHEC (Reproduced by courtesy of the Spanish Hydrogen Association, Spain) 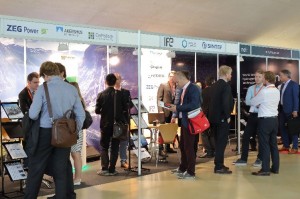 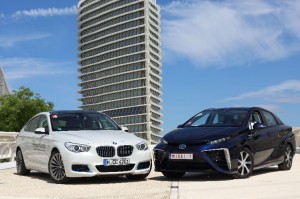 Keynote talks from Matthias Klietz (BMW AG, Germany) and Jacques Pieraerts (Toyota Motor Europe, Belgium) focused on their introduction of FCEVs. BMW’s view is that their customers no longer simply want zero emission FCEVs but want well to wheels zero emission vehicles (ZEV). This means that the hydrogen to refuel these vehicles will need to come from renewable energy sources (wind, solar) via electrolysis rather than from fossil fuels. Toyota reiterated this view, adding that their 2050 roadmap has only hybrid internal combustion engine vehicles (possibly fuelled by hydrogen or biogas rather than gasoline or diesel) including plug in hybrids alongside battery and FCEV. Toyota and BMW are engaged in a pre-competitive collaboration looking at joint development of fuel cell stacks, systems and hydrogen storage tanks.

3. The Role of Hydrogen in Grid Balancing

Other keynote talks focused on the role of hydrogen in balancing electricity transmission grids. Klaus Bonhoff (National Organisation Hydrogen and Fuel Cell Technology (NOW) GmbH, Germany) discussed Germany’s 2050 targets (based on European Union (EU) 2050 targets) to have a 90% reduction in greenhouse gas emissions, with renewables accounting for 60% of energy requirements by then, compared to their 18% contribution today. This is expected to be achieved via electrolysis using renewable electricity (wind, solar) with storage via power to gas (P2G) and batteries. A number of German initiatives including market preparation for residential fuel cell systems, technology validation for fuel cell vehicles (including a programme involving 50 refuelling stations) and 30 P2G schemes were discussed.

Simon Bourne (ITM Power, UK) discussed the increasing use of renewable electricity in the UK and issues with curtailment, where renewable electricity (from wind) is available but there is no demand for the power. Electrolysers can be a useful transducer between power and gas particularly if the electrolysers have a rapid (<1 second) response to enable the grid frequency to also be balanced. At a 1 MW scale, 72% efficiency is typical and can be up to 86% where waste heat is also utilised. Storage capacity in the UK’s gas network is five times that of the electricity grid. Rather than converting hydrogen into methane (via reaction with carbon dioxide), a UK safety laboratory reported that up to 20% hydrogen in the natural gas network would not impact on polyethylene pipework or gas appliance performance and provide no additional safety issues compared to natural gas alone. However, the regulations on natural gas composition in many countries specifically limit the hydrogen content to very low levels and so there are political as well as technical limitations to be overcome.

Gregor Waldstein (ETOGAS GmbH, Germany), discussed experiences from some successful P2G projects, including Audi’s ‘e-gas’ plant, which upgrades biogas to synthetic natural gas (SNG) using hydrogen from electrolysis with renewable electricity. Owners purchase compressed natural gas (CNG) using a top-up card and the plant adds the amount of CNG used to the gas network. It was commented that the mobility market is willing to pay the higher cost of gas compared to the electricity market. Considering well to well emissions (including battery manufacture) the technology is considered to have similar carbon dioxide emissions to wind electricity plus battery systems, although exactly where and how total emissions are defined remains a contentious issue. Everett Anderson (Proton OnSite, USA) described how in some US locations, continuing wind turbine construction is leading to extremely cheap electricity in significant quantities, meaning that the cost of hydrogen via electrolysis can compete with the hydrogen cost from steam methane reforming traditionally used for hydrogen production and without carbon dioxide emissions.

Hydrogen resources overseas, including fossil and renewable sources would produce hydrogen which will be transported to Japan. Tankers will be used to import hydrogen via liquid hydrogen (Kawasaki Heavy Industries, Japan) or through organic carriers such as methyl cyclohexane. Yoshimi Okada (Chiyoda Corporation, Japan) discussed a toluene-methylcyclohexane hydrogenation-dehydrogenation system which is already being introduced at a significant scale by the Chiyoda Corporation using a platinum group metal catalyst.

Mina Jeon (Korea Institute of Science and Technology, South Korea) explored the topic of ammonia, one of the world’s largest commodity chemicals which is also considered to be a vector for hydrogen transportation, having 17.7 wt% hydrogen storage density and can be easily liquefied. The ammonia can be decomposed to generate hydrogen, or as Osamu Kurata (National Institute of Advanced Industrial Science and Technology (AIST), Japan) discussed, can be used to generate electricity directly by combustion in a gas turbine power station. Oren Elishav (Technion – Israel Institute of Technology, Israel) looked at alternative nitrogen based carriers which include urea, ammonium hydroxide or ammonium nitrate mixtures. Ammonium hydroxide or urea mixtures were considered to be safer alternatives to ammonia and are also suitable for combustion processes.

Alternative organic hydrogen carriers being considered in Germany, such as dibenzyl toluene, were discussed by Daniel Teichmann (Hydrogenious Technologies GmbH, Germany). These are liquid at operating temperature, non-flammable and non-toxic so are considered safer than existing hydrocarbons handled in the fuel transportation industry. Hydrogenation is carried out using a photovoltaic system coupled to an electrolyser. A demonstration system is currently supplying a FCEV refuelling station in Stuttgart. Economically, the technology is considered to be more expensive than cryogenic hydrogen transportation but significantly more flexible.

WHEC 2016 attracted a large number of delegates to participate in a range of topics related to hydrogen and fuel cells, including fuel cell electric vehicles, hydrogen production, hydrogen storage and hydrogen distribution. Other, emerging uses for hydrogen such as applications in electricity grid balancing and power to gas applications also received significant coverage. Owing to the large number of talks across eight parallel sessions, this review has only covered a small proportion of the presentations given.

David Wails is a Senior Principal Scientist in the Low Carbon Technology group at Johnson Matthey Technology Centre, Sonning Common, UK. His areas of research include hydrogen production for fuel cell vehicles and stationary fuel cells, and hydrogen utilisation in power to gas and power to chemical applications.