Solubility Relationships in the Ruthenium-Platinum System

Solubility Relationships in the Ruthenium-Platinum System

Ruthenium hardens platinum very effectively and the dilute solid solutions thus obtained are strong, ductile, and remarkably resistant to corrosion. In view of their wide application in electrical technology and in the manufacture of jewellery it is surprising that little has hitherto been published on the true nature of these valuable noble metal alloys. Until very recently the widths of the primary solid solutions at each end of the diagram were very uncertain. Whereas early Russian workers had suggested that platinum would dissolve at least 70 atomic per cent (1) and probably 79 atomic per cent (2) of ruthenium, more recent investigations at the Battelle Memorial Institute (3) indicated that the solid solubility of ruthenium in platinum was only about 32 atomic per cent.

The boundaries of the two-phase region separating the cubic platinum and hexagonal ruthenium solid solutions are shown in Fig. 1. The solidus and liquidus lines in this diagram are purely tentative, but in view of the complete absence of intermediate phases in these alloys it seems evident that the system is, as indicated, of the simple peritectic type.

This proposed diagram of the ruthenium-platinum system shows the boundaries of the two-phase region separating the cubic platinum and hexagonal ruthenium solid solutions. The solidus and liquidus lines are tentative but the absence of intermediate phases indicates a simple peritectic system

The experimental points defining the limits of the solubility of platinum in ruthenium were obtained without difficulty by micro-probe analysis, and showed little inconsistency. The solubility of platinum in ruthenium increases with temperature very slowly indeed and little precipitation from these solutions occurred on quenching. The solubility of ruthenium in platinum, however, increases fairly rapidly with increasing temperature, and it was found that the high temperature structure of the saturated platinum solutions could not be fully retained by quenching. Considerable precipitation occurred, and this influenced the composition of the retained phases and reflected itself in the high hardness of the quenched duplex alloys. In the hardness curve shown in Fig. 2 a gently ascending line typical of normal solution hardening is followed by a well-defined hardness peak associated with precipitation across the whole duplex region.

The hardness of ruthenium-palladium alloys quenched from 1800°C. This curve shows a gently ascending line typical of normal solution hardening followed by a peak associated with precipitation across the whole width of the duplex region

The microstructure of quenched 70 at.% ruthenium-platinum alloy displays a volumetric distribution of the two phases commensurate with the position of this alloy within the two-phase area 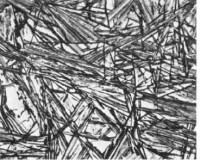 The microstructure of 80 at.% ruthenium-platinum. This alloy contains only a small proportion of the platinum-rich phase, thus confirming that it is just within the duplex boundary at 1000°C

Acknowledgements are due to Mr J. H. F. Notton for the micro-probe analysis.