The Minting of Platinum Roubles

The Minting of Platinum Roubles

Heraeus has in its possession four platinum rouble coins and one commemorative platinum medallion minted between 1826 and 1844. In order to determine their composition and to learn a little more about the methods used in their manufacture, they have been subjected to various techniques of non-destructive examination. These have included a developmental SQUID microscope specifically used to look at magnetic effects due to the iron content.

In order to find out more about the methods of manufacture of Russian platinum roubles and to investigate the magnetic effects of iron on platinum, Christoph Raub suggested some studies on the platinum roubles owned by Heraeus. The platinum used in nineteenth century Russian roubles is known to contain small amounts of iron. Various non-destructive tests, including the use of a developmental SQUID microscope, were therefore undertaken into the structure and purity of the coins and medallion. The samples are:

After initial optical photography and determination of the mass and dimensions, the density of the coins was measured using the Archimedes technique of immersion in water. The obverse faces of the coins and the medallion were then examined in the scanning electron microscope (SEM) and two areas on each were subjected to energy dispersive X-ray analysis (EDX). To obtain a more representative overview of the impurity contents, the coins and medallion were examined by energy dispersive X-ray fluorescence analysis (ED-XRF) over essentially the complete surface area (the maximum diameter analysed = 29 mm). The ED-XRF analyses can only be regarded as semi-quantitative because of the uneven surface of the coins. The average error of the measurements is estimated to be 10% of the value.

In view of the significance of iron as an impurity in the platinum, the 12 rouble coin of 1832 and the coronation medallion were also investigated using a superconducting quantum interference device (SQUID) microscope. This instrument was operated in the direct current mode, permitting the magnetic properties to be determined throughout the thickness of the material. The SQUID was being developed in the Institute of Applied Physics at the University of Giessen in collaboration with Heraeus (1). This device permits the imaging of the magnetic properties of the sample over a relatively small area (areas of approx. 20 × 20 mm and 7 × 7 mm were examined).

Table I contains a summary of the mass, density and dimensions of the coins and medallion. In all cases the density is considerably lower than that of pure platinum (21.45 g cm−3), the highest value being 21.18 g cm−3 for the 6 rouble/1830 coin.

Density and Dimensions of the Heraeus Platinum Coins

Figure 1 shows optical macrographs of the obverse and reverse of the four coins and the medallion. Most of the coins show a streaky surface structure which is unrelated to the stamping on the coin face. Particularly in the case of the 12 rouble/1832 coin and the coronation medallion it can be seen that the striations on the obverse are essentially a mirror image of those on the reverse. It can therefore be assumed that they relate to material inhomogeneities which are present throughout the thickness of the coin. The fact that the large striation on the obverse of the coronation medallion cannot be seen where it crosses the raised portion of the “H” demonstrates that it is not a superficial scratch caused after minting.

Platinum medallion commemorating the coronation of Tsar Nicholas I, minted in 1826

A number of SEM micrographs of the coins and the medallion are shown in Figure 2. In many areas, a mottled structure can be seen (for instance, around the crown on the obverse of the 6 rouble/1830 coin, Figure 2(a)). The surface striations are less obviously visible than in the optical macrographs because of the lower contrast in the SEM. However, they can be clearly seen on the obverse of the coronation medallion, especially above the “H” to the left of the crown, Figures 2(b) to 2(d).

Fig. 2(b) SEM, obverse of the coronation medallion

Fig. 2(i) SEM micrograph; high magnification of the 12 rouble coin shows the high quality of the stamping on this coin. A superficial scratch is visible

The 12 rouble/1832 coin has a distinctly scaly surface appearance, see Figures 2(e) and 2(f). The structure of these areas is shown at higher magnification in Figures 2(g) and 2(h). The black spots marked “A1” in Figure 2(h) were analysed by EDX and found to consist of almost pure iron, possibly resulting from the tooling used in stamping the coin. Figure 2(i) shows the high quality of the stamping on this coin, in contrast to the striations described above, and also a superficial scratch.

During examination in the SEM, EDX analyses were carried out on two areas on each coin (Table II). The main impurities found at various levels in all coins are iron, iridium, gold and rhodium. The values of the individual elements vary significantly within one coin. The most substantial impurity is gold in one area of the 3 rouble/1844 coin which is also associated with relatively high values for copper. This coin also contains an unusually high level of rhodium.

2 measurements on each surface (wt.%)

Table III gives the results of the semi-quantitative ED-XRF analyses which can be regarded as integral measurements over the whole surface area. For the major impurities there is a reasonable degree of correspondence with the SEM-EDX analyses. The relatively high levels of copper, gold and rhodium in the 3 rouble/1844 coin and of iron and iridium in the coronation medallion are essentially confirmed. The largest discrepancy is to be seen in the impurities in the 6 rouble/1830 coin where the ED-XRF analysis indicates a higher concentration of iron but lower concentrations of gold and iridium than SEM-EDX. This is probably a result of the considerable inhomogeneities in the material.

Integral measurements over an area of max. 29 mm diameter (wt.%)

The SEM and ED-XRF studies had revealed significant quantities of iron in the coins. Berzelius (2) reported relatively high levels of iron in native platinum ore which was magnetic in some cases. Besides the Fe-rich solid solution, disordered FePt3 is reported to be ferromagnetic in Massalski (3) after Kren et al. (4, 5). Also, Auer et al. (6) found platinum coins to be ferromagnetic in varying degrees. The expectation of ferromagnetism in the Heraeus platinum coins was the main reason for then turning to the developmental SQUID microscope to obtain more information on the internal structure of the coins.

The reverse and obverse of the coronation medallion were examined at low magnification over an area of 20 × 20 mm or 20 × 17 mm (Figures 3(a)–3(c); Figures 3(a) and 3(b) show the same area with different false colours to highlight the contrast features). The area in the centre of the obverse was then examined at higher magnification over an area of 7 × 7 mm (Figures 3(d)). An area 7 × 7 mm of the 12 rouble/1832 coin which had the distinctly scaly appearance was also examined (Figure 3(e)).

(a) (left) and 3(b) (right) SQUID microscope images of the coronation medallion of 1826 (reverse) showing ferromagnetic inhomogeneities. Different false colours are being used.

Fig. 3(c) (left) SQUID microscope image of the obverse of the coronation medallion. 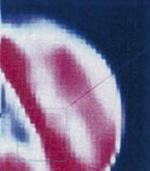 Fig. 3(d-micro) (right) SQUID microscope image of enlarged detail from Figure 3(c) (obverse) corresponding to the area marked in the macrograph below. 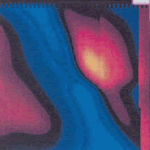 Fig. 3(d-macro) Macrograph of the coronation medallion with an area marked for enlargement and shown in the SQUID image in Figure 3(d-micro) above

Fig. 3(e) (left) SQUID microscope image of the 12 rouble/1832 coin. The detail shows ferromagnetic inhomogeneities in the 12 rouble coin of 1832

Fig. 3(f) (right) The area marked in the macrograph shows the area examined by the SQUID image on the left.

A comparison of Figures 3(a)–3(c) shows that substantial magnetic inhomogeneities are present which are elongated across the diameter of the medallion. The orientation on the obverse (Figure 3(c)) is essentially a mirror image of that on the reverse (Figures 3(a) and 3(b)), corresponding to the optical macrographs in Figure 1. This demonstrates conclusively that the superficially visible defects on both faces of the medallion are associated with inhomogeneities in the bulk of the material. The correspondence of the inhomogeneities on the obverse (Figures 3(c) and 3(d)) with the optical image is particularly striking.

The 12 rouble/1832 coin also demonstrated substantial magnetic inhomogeneities, Figure 3(e). Unfortunately, however, the coin became so strongly magnetised that magnetic saturation was reached after the first measurement and no further measurements could be made. The above results are compatible with a powder metallurgical production route using grains of partially purified native platinum.

Auer et al. (6) described techniques used in St. Petersburg for purifying platinum. Also described is a method used for compacting sponge (from a fully dissolved phase) and manufacturing sheet by forging and rolling. In their earlier paper on 19th century platinum coins, Bachmann and Renner (7) quoted work by Kieffer (8) who reported that platinum sponge was compressed under high pressure to circular blanks which were sintered, again compressed, heated and struck into coins. The presence of the surface striations and the oriented, scaly appearance of the surfaces observed in the present investigations indicated that the manufacturing route for the coins is more compatible with the method described by Auer et al. (6) than that of Kieffer (8), that is, the metal was forged and rolled, before being struck into coins.

The results of our investigations, in particular the SQUID microscope examination of the 1826 coronation medallion, indicate strongly that the manufacturing route was one described by Auer et al. (6) where partially purified platinum grains were pressed to a block, sintered and then forged and rolled to a sheet or strip, thus causing the residual inhomogeneities to become elongated. Blanks were then punched from the sheet and struck to coins.

Sincere thanks are due to Dr. Michael Mück and the late Professor Christoph Heiden, Institute of Applied Physics, University of Giessen for the investigations with the SQUID microscope. I also thank my colleagues Klaus Belendorff, Wolfgang Hartmann, Margarete Hoss, Ronald Röhr, Hanne Schneider and Friedhold Schölz for their invaluable assistance in the work reported.

Dr David Lupton is the Development Manager for the Engineered Materials Division of W. C. Heraeus in Hanau. His main interests are the processing and applications of the platinum group metals and refractory metals.