The L12 intermetallic compounds based on iridium (Ir3X) have been pursued as the next generation of high-temperature structural materials (1–6). The advantages of Ir3X are summarised as follows. Firstly, the melting points are between 600 and 1000 K higher than those of nickel-based superalloys (7). Secondly, an L12 crystal structure offers the possibility of enhanced ductility as a result of the large number of possible slip systems. Finally, the two-phase γ/γ′ type microstructure formed in Ni-based superalloys can also be produced in Ir-based alloys (8–10).

The Ir-based compounds Ir3X form an L12 crystal structure when the partner component X belongs to Group 4 or 5 of the Periodic Table (13–15). The present study was conducted to provide the data for thermal conductivity and thermal expansion of Ir3X (X = Ti, Zr, Hf, V, Nb or Ta) which serve to evaluate the suitability of the compounds for high-temperature structural applications. The alloy compositions prepared in this study are given in Table I, together with the compositional range of the L12 phase at the homogenised temperature (1573 K) (7). The stoichiometric composition was chosen for each compound except Ir3Hf. Note that the composition close to stoichiometry with L12 single phase was selected for Ir3Hf, since an L12 single phase is not achieved at the stoichiometric composition.

Chemical Composition of the Ir3X Compounds Used in This Investigation, Together with the Composition Range of the L12 Phase at the Homogenised Temperature (1573 K) (7)

Thermal conductivity measurements were performed by the laser flash method in vacuum in the temperature range between 300 and 1100 K, using a disc specimen of diameter 10 mm and thickness 2 mm (16). A short duration laser pulse is emitted from a ruby rod onto the surface of the disc specimen. The temperature change on the other side of the specimen was measured over time by both an infrared detector and a type R thermocouple. From the temperature-time profile, thermal conductivity was obtained (17). Thermal expansion measurements were made using a dilatometer which consists of an alumina pushrod driving a linear voltage differential transformer (LVDT) (18). Dilatometer specimens were normally 3 mm square and 8 mm long. Thermal expansion tests were conducted over the temperature range from 300 to 1100 K at a heating rate of 10 K min−1 in an argon atmosphere.

Thermal conductivity versus temperature for Ir3X (X = Ti, Zr, Hf, V, Nb or Ta). Note that the value of Ir3Hf is the off-stoichiometric data 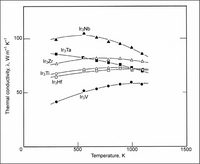 The temperature coefficient of thermal conductivity, k, in the temperature range between 300 and 1100 K can be estimated from Equation (i):

Correlation between thermal conductivity at 300 K and temperature coefficient for Ir3X. The data for pure metals (19–21) and intermetallic compounds (22–24) are also indicated 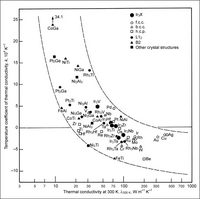 Thermal expansion of Ir3X during heating from 300 to 1100 K. The heating rate is 10 K min−1. Note that the curve of Ir3Hf is the off-stoichiometric data. 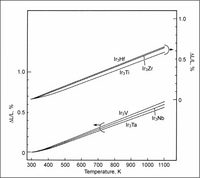 Coefficient of Thermal Expansion of Ir3X Compounds at 800 K

Correlation between coefficient of thermal expansion at 800 K and melting point for Ir3X. The data for pure metals (21, 27) and intermetallic compounds (22, 28) are also indicated 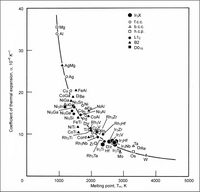 The interatomic force in metallic materials is characterised by cohesive energy, Ecoh, defined as the difference between the potential energy of atoms in the gas state and that in a crystal of the material. The cohesive energy in intermetallic compounds is expressed as the sum of the sublimation energy of the alloy, Esub, and the heat of formation of ordered structure, ΔH (29), Equation (ii):

Table III summarises the Ecoh, Esub and ΔH values for the Ir3X compounds, where Esub was obtained from the data source (30) and ΔH was calculated from Miedema's formula (31, 32). The data for Ni3Al and NiAl are also indicated in Table III. It can be seen that the cohesive energy of intermetallic compounds originates mostly from the sublimation energy rather than the heat of formation of ordered structure. The cohesive energy for Ir3X is located around 700 kJ mol−1, which is 1.7 times larger than that of Ni3Al and NiAl. The larger cohesive energy of Ir3X would result in the higher melting point and in the smaller CTE of the compounds.

Cohesive Energy, Sublimation Energy and Heat of Formation for Ir3X, Ni3Al and NiAl

[i] *Sublimation energy is obtained from the data source (30) 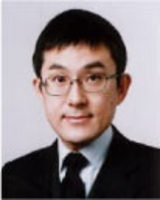 Yoshihiro Terada is an Associate Professor in the Department of Materials, Physics and Energy Engineering, Nagoya University, Japan. His main activities are in the thermal and mechanical properties in metallic materials for high-temperature applications. His major field of present interest is the creep mechanisms of heat resistant magnesium alloys.