[Pd(μ-Br)(tBu3P)]2 AS A PRACTICAL CROSS-COUPLING CATALYST

The Pd(I) dimer [Pd(μ-Br)(tBu3P)]2 is one of the best third-generation cross-coupling catalysts for carbon–carbon and carbon–heteroatom coupling reactions. Information on its characterisation and handling are presented, including its decomposition mechanism in the presence of oxygen. The catalytic activity of [Pd(μ-Br)(tBu3P)]2 is higher than either (tBu3P)Pd(0) or the in situ generated catalyst system based on Pd2(dba)3 with tBu3P. Examples of suitable reactions for which the Pd(I) dimer offers superior performance are given.

The palladium(I) dimer, di-μ-bromobis(tri-tert-butylphosphine)dipalladium(I), [Pd(μ-Br)(tBu3P)]2, was synthesised and fully characterised by Mingos (1, 2). However, its potential as a unique C–C and C–N coupling catalyst (3) was first explored by Hartwig (6). It has emerged as one of the best third-generation coupling catalysts for cross-coupling reactions, including C–heteroatom coupling and α-arylations. In this review, the physical and chemical characteristics of the Pd(I) dimer as a catalyst material are discussed from a practical viewpoint, and up to date information on its applications in coupling catalysis is provided.

The Pd(I) dimer is a dark greenish-blue crystalline material, which gives a single peak in the 31P NMR spectrum at (δ) 87.0 ppm. The 1H NMR spectrum gives a peak at (δ) 1.33 ppm (singlet; on expansion it appears as a distorted triplet) in deuterated benzene (1, 2). The compound decomposes in chlorinated solvents, especially in deuterated chloroform. The X-ray crystal structure is reported in the literature as a dimer with Pd–Pd bonding, stabilised by bromine atoms via bridge formation (1, 2). It can be handled in air as a solid for a short period of time, allowing the user to place it into a reactor in the absence of a solvent, degas and then carry out catalysis under inert conditions. However, this compound is highly sensitive to air and moisture in the solution phase. It can also decompose in the solid phase if not stored under strictly inert conditions. The solid state decomposition pattern over time was monitored in our laboratory at 0, 48 and 112 hours (Figure 1) (4). Its sensitivity towards oxygen is well understood, and is based on the formation of an oxygen-inserted product with the elimination of hydrogen (Scheme I) (5). Figure 2 shows the oxygen sensitivity of the Pd(I) dimer on a proton-decoupled 31P NMR spectrum recorded using a solvent which was not degassed. The peak at 107 ppm indicates the presence of the oxygen-inserted decomposition product.

The oxygen sensitivity of Pd(I) dimer, [Pd(μ-Br)(tBu3P)]2, with the formation of an inactive Pd-O species (5)

The high catalytic activity of the Pd(I) dimer [Pd(μ-Br)(tBu3P)]2 is due to its ease of activation, presumably to a highly active, coordinatively unsaturated and kinetically favoured ‘12-electron’ catalyst species, (tBu3P)Pd(0) (Scheme II). This renders the Pd(I) dimer more active than either the known ‘14-electron Pd(0)’ catalyst, (tBu3P)2Pd(0), or the Pd(0) catalyst generated in situ by mixing Pd2(dba)3 with two molar equivalents of tBu3P. The applications of the Pd(I) dimer in organic synthesis are described below.

Hartwig identified the potential of the Pd(I) dimer as a highly active catalyst for C–N coupling using aryl chlorides as substrates with various amines at room temperature. A few examples are shown in Scheme III (6). Typically, aryl chloride coupling requires higher temperatures and longer reaction times when using the in situ generated Pd(0) catalyst, or even the (tBu3P)2Pd(0) complex (7). Around the same time, Prashad and coworkers at Novartis reported an amination reaction using [Pd(μ-Br)(tBu3P)]2 with challenging substrates such as hindered anilines (8). Scheme IV shows the coupling of N-cyclohexylaniline with bromobenzene, comparing the performance of the Pd(I) dimer with those of in situ generated catalysts derived from Pd(OAc)2 with tBu3P, BINAP, Xantphos or DPEphos. The performance of [Pd(μ-Br)(tBu3P)]2 is superior in each case.

Hartwig's group subsequently conducted a detailed study to understand the activity and scope of [Pd(μ-Br)(tBu3P)]2 in the amination of five-membered heterocyclic halides. Various combinations of Pd precursors with tBu3P were studied for a model system, the reaction of N-methylaniline with 3-bromothiophene. The fastest reaction occurred with the Pd(I) dimer (9).

More recently, Eichman and Stambuli reported a very interesting zinc-mediated Pd(I) dimer-catalysed C–S coupling, which should generate much interest in the area of C–S coupling (Scheme V) (10). For the reactions of alkyl thiols with aryl bromides and iodides, potassium hydride was the best base, as illustrated in Scheme V. For the Pd-catalysed cross-coupling reactions of aryl bromides and benzenethiol using zinc chloride in catalytic amounts, with sodium tert-butoxide as the base, most of the reactions were sluggish and gave low yields. However, the addition of stoichiometric amounts of lithium iodide increased the rate of the reaction significantly, which is speculated to be due to the anionic effects proposed by Amatore and Jutand (11).

Research work from Ryberg at Astra Zeneca (12) demonstrated a very practical, clean method for C–CN coupling using the Pd(I) dimer [Pd(μ-Br)(tBu3P)]2 to produce 3 kg to 7 kg of product routinely (Scheme VII). During the initial in situ studies, Pd2(dba)3 in combination with commercial ligands such as Q-Phos, tBu2P-biphenyl or Cy2P-biphenyl gave poor results, although with proper process tweaking improvements were made. The conventional ligands, such as Ph3P and dppf, were not useful. However, the P(o-tol)3/Pd2(dba)3 system behaved somewhat well with the formation of some byproducts. The Pd loading was as high as 5 mol% (12).

For the α-arylation (13) of fairly challenging carbonyl compounds, Hartwig identified the Pd(I) dimer [Pd(μ-Br)(tBu3P)]2 as one of the best catalysts, especially for amides and esters. The work from Hartwig's group provided general conditions for α-arylations of esters and amides (14–16). The coupling reactions of aryl halides with esters are summarised in Scheme VIII (17). For aryl bromides, lithium dicyclohexylamide (LiNCy2) was the best base, while sodium hexamethyldisilazide (NaHMDS) was required for aryl chloride substrates. Intermolecular α-arylation of in situ generated zinc enolates of amides was also reported in excellent yield under Reformatsky conditions using the Pd(I) dimer, (Scheme IX) (18). The appropriate choice of base for the substrate is critical for this reaction.

The α-vinylation of carbonyl compounds has been reported recently by Huang and coworkers at Amgen, catalysed by the Pd(I) dimer in conjunction with lithium hexamethyldisilazide (LiHMDS) base (Scheme X) (19). The same catalytic system can be extended to the α-vinylation of ketones and esters. The combination of Pd2(dba)3 with Buchwald ligands such as X-Phos and S-Phos gave inferior results, as did in situ catalysis with ligands such as Xantphos, (S)-MOP, BINAP and IPr-HCl (carbene) in the presence of Pd2(dba)3. Amgen researchers also reported a stereoselective α-arylation of 4-substituted cyclohexyl esters using the Pd(I) dimer at room temperature, with lithium diisopropylamide (LDA) as the base. Diastereomeric ratios, dr, of up to 37:1 were achieved (Scheme XI) (20).

The Pd(I) dimer [Pd(μ-Br)(tBu3P)]2 stands out as unique among the third generation catalysts for cross-coupling. It has a higher activity than other catalysts, a fact which can be attributed to its ability to form a 12-electron ‘ligand-Pd(0)’ species during the activation step in the catalytic cycle. Its application to a wide variety of C–C, C–N and C–S cross-coupling reactions will enable higher yields and better product selectivities under relatively mild conditions.

Fred Hancock and Gerard Compagnoni of Johnson Matthey's Catalysis and Chiral Technologies are acknowledged for their support of this work. 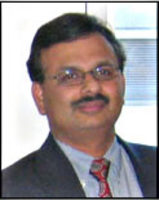 Dr Thomas J. Colacot is a Research and Development Manager in Homogeneous Catalysis (Global) of Johnson Matthey's Catalysis and Chiral Technologies business unit. Since 2003 his responsibilities include developing and managing a new catalyst development programme, catalytic organic chemistry processes, scale up, customer presentations and technology transfers of processes globally. He also works with global pharmaceutical customers to promote and commercialise new technologies. Dr Colacot holds a Ph.D. in Chemistry from the Indian Institute of Technology, Madras (1989) and an MBA in Strategy & New Venture from Penn State University, U.S.A. (2004). He also occasionally teaches a graduate course in 'The Organometallic Chemistry of Transition Metals' at Rutgers University, New Jersey, U.S.A. Dr Colacot is a coauthor of about 70 articles which include reviews, peer-reviewed publications, book chapters and patents. He has given over 250 presentations at national and international conferences, universities and chemical and pharmaceutical companies. Prior to joining Johnson Matthey in 1995, he carried out post-doctoral research and undergraduate teaching in the U.S.A. He is a Ph.D. thesis external examiner to several Indian Institutes of Technology and the National Chemical Laboratory, Pune, India, and regularly contributes to peer review in the fields of organic and organometallic chemistry and catalysis for several major journals.