OBSERVATIONS COMPLIANT WITH THE WIEDEMANN-FRANZ RELATION

The advantage of using platinum (Pt) in industrial applications is due to its unique properties, such as its catalytic activity, high melting point (1), ductility (2, 3) and chemical inertness over a wide range of temperatures (4, 5). Platinum has been used for biomedical components, specialty chemicals, fuel cells and for pollution control catalysts, such as in automobile exhausts, as well as for jewellery, thermocouples and the cathodic protection of ships' hulls (3).

One typical application of platinum is in electronics devices, with thick film conductors being among the major products (6). Alloying elements, selected from the platinum group metals and noble metals, are usually employed to help develop higher strength or to protect a surface against deleterious service conditions (3). However, the addition of an alloying element may degrade the conductivity. Until now, the data available on the conduction properties of platinum alloys have been limited (7-12).

Dependence of Thermal Conductivity on Composition

The thermal conductivities at 300 K for Pt alloys as a function of solute concentration, is shown in Figure 1, together with data for pure Pt (1, 13, 14). Vanadium (V) and nickel (Ni) were selected as solutes. Nickel belongs to the same column as Pt in the Periodic Table (Pt-Ni is an isoelectronic system) while V is positioned horizontally far distant from Pt (Pt-V is a non-isoelectronic system). All the alloys used in this investigation have a face centred cubic (f.c.c.) single phase; whereas in the Pt-V system, the order-disorder transformation occurs at a stoichiometry of 3 : 1. The data for Pt3V with a f.c.c. disordered structure and a D022 ordered structure are from earlier work (15). Note that the heat treatment at 1573 K for 1 hour was undertaken to achieve the disordered state in Pt3V, while ageing at 1020 K for 168 hours was employed for the ordering reaction.

Composition dependence of thermal conductivity at 300 K in Pt-Ni and Pt-V alloys. Data for pure Pt are represented by the solid square on the axis (1, 13, 14). The recommended values for pure Pt in these data sources are similar. The solid triangle is data for Pt3V with the D022 ordered structure (15) 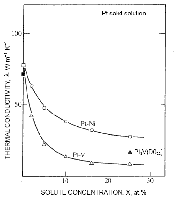 Figure 1 shows that the thermal conductivity increases on formation of the D022 ordered phase at composition Pt3V. This increase in conductivity by ordering seems to be a general feature which is also demonstrated by Pt3Cr with the L12 structure, and in Ni3V(D022), Ni3Mn(L12) and Ni3Fe(L12) (15). Thermal conductivity is usually degraded by the scattering of carriers in the crystal lattice. Topological and configurational disorder, such as impurities, vacancies and lattice defects, impede the flow of heat carriers. Hence, well-ordered intermetallic compounds should have higher conductivity than their disordered alloys, assuming that the carrier concentrations do not change in both phases (16).

where L is the Lorentz number, T is the absolute temperature and σ is the electrical conductivity. A universality constant of λ/σ was found to be equal to 7.5 × 10-6 Ω K-1 at 300 K for pure metals (17).

The dominant carrier of thermal conduction in Pt alloys is, therefore, ascribed to an electron rather than to a phonon: more specifically, the 6s electrons are considered to be responsible for the thermal conduction.

Wiedemann-Franz relation for Pt-Ni and Pt-V alloys at 300 K. Alloy compositions are in atomic percent 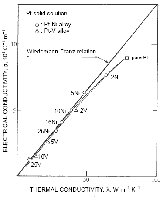 Dependence on the Constituents

The thermal conductivity at 300 K of Pt-2 at.% X alloys as a function of the atomic number of solute X.

There are no data for Tc because the alloy is unstable.

There are no data for Zn, Cd, Hg and Tl as their lower boiling temperatures prevent the alloy ingots being prepared by arc melting 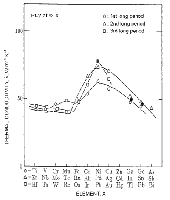 This trend was reported for electrical resistivity and is known as the Norbury rule (21). Norbury studied the change in electrical resistivity by the addition of solutes to Fe, Ni, Cu, Ag, Au and Mg and the molten states of Na and K. An empirical rule was found that the electrical resistivity of binary alloys increases as the position in the Periodic Table of the solute element becomes horizontally distant from that of the host component. The current results imply that the Norbury rule generally holds for transport phenomena driven by electrons. Unlike the case of B-subgroup elements, however, the behaviour is more complicated when the solute belongs to the remaining transition elements. For the first long period, the thermal conductivity decreases monotonically as the distance of X from Pt increases. This breaks down at Mn. The breakdown occurs at elements distant from Pt when solute X belongs to the third long period. It is notable that Re most significantly decreases the thermal conductivity of Pt. Also noteworthy is the fact that the thermal conductivities are quite similar to one another for solutes belonging to the same column, typically demonstrated in the columns IVA, VA and VIII (Fe, Ru, Os). The data in Figure 3 also suggest that the thermal conductivity is more dependent on the column of solute X and is less dependent on the period. 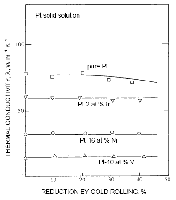 Thermal conductivities in Pt-Ni alloys as a function of temperature are shown in Figure 5 together with values for pure Pt from data sources represented by the broken line (13, 14). The thermal conductivity of pure Pt, measured in the present study, increases monotonically with increasing temperature and reaches approximately 95 W m-1 K-1 at 1100 K. The monotonic increase is also confirmed for the reference data, though the magnitude is systematically lower. Adding Ni does not alter the general trend of monotonic increase and only results in shifting the entire data to lower values. Furthermore, close observation reveals that the temperature coefficient becomes larger with increasing nickel concentration and all the data seem to converge at higher temperatures. 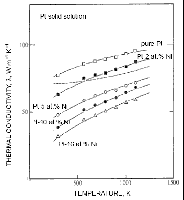 Correlation at 300 K, between the thermal conductivity and the temperature coefficient for Pt-Ni and Pt-V alloys. Each value has an alloy composition.

Ten values for Pt-2 at.% X alloys are plotted.

Elements X are from the second long period 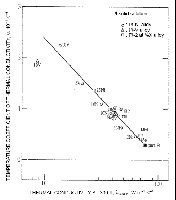 The pure Pt had a thermal conductivity of 77.8 W m-1 K-1 at 300 K with a positive temperature coefficient of 2.9 × 10-4 K-1. The thermal conductivity monotonically decreases with increasing Ni concentration, accompanied by the increase in the coefficient. Such an inverse correlation is more clearly seen in the semi-log plot, see Figure 6. Interestingly, most Pt-V alloys have the same correlation except for Pt-16V alloy. Moreover, various selected elements from the second long period shown by open squares also keep the same correlation, which implies the correlation may have a universal feature. The inverse correlation between α and λ300 K may be a general feature for metallic materials, and has been well documented not only for binary solid solutions but also for multicomponent materials, such as steels and superalloys, and for intermetallic compounds (15, 22).

Thermal conductivity in Pt alloys was comprehensively surveyed as a function of solute concentration, work hardening and temperature. The results are as follows: 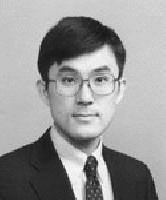 Yoshihiro Terada is an Associate Professor in the Department of Metallurgy and Ceramic Science, Tokyo Institute of Technology. His main activities are in the thermal and mechanical properties of metallic materials for high temperature applications.

Kenji Ohkubo is a Technician in the Division of Materials Science and Engineering, Hokkaido University. His major field of interest is the determination and characterisation of thermal properties of metallic materials by the laser flash method.

Tetsuo Mohri is a Professor in the Division of Materials Science and Engineering, Hokkaido University. His major field of interest is the first-principles study on phase stability, equilibria and transformation for metallic systems.