This paper describes a class of ruthenium indenylidene complexes which constitute robust and efficient pre-catalysts for olefin metathesis reactions, specifically ring-closing metathesis of substituted linear dienes, acyclic diene metathesis of α,ω-dienes, enyne metathesis and ring-opening metathesis polymerisation of cycloolefins. They readily allow reactions not promoted by many prior ruthenium catalysts, such as the synthesis of tri- and tetrasubstituted cycloalkenes as well as ring-closing metathesis involving highly substituted dienes. The activity and stability of these pre-catalysts can be finely tuned by adjusting both steric and electronic effects in the metal coordination sphere through an appropriate selection of ancillary ligands. Due to their accessibility, enhanced activity and good stability, this class of ruthenium complexes gratifyingly extends the scope and utility of the currently used metathesis catalysts.

Nowadays the synthesis of single-site ruthenium (Ru) metathesis pre-catalysts (1) is emerging as an appealing challenge for a large number of research groups working in the area of organometallic chemistry (2-10). The 16-electron ruthenium benzylidene and vinyl carbene complexes 1 and 2 (R = Ph or Cy), developed by Grubbs and coworkers (11, 12), turned out to be versatile and reliable metathesis pre-catalysts enjoying a variety of applications in advanced organic synthesis and polymer chemistry (13, 14). They display a wide spectrum of activity while exhibiting good tolerance towards air, moisture and many organic functionalities. Despite this attractive application profile some drawbacks of the bisphosphane complexes 1 and 2 have to be taken into account. The drawbacks are:

(a) special precautions during their preparation involving diazoalkane derivatives and cyclopropane,

(b) limited thermal stability upon heating, and

In the last instance, the complexes allow synthesis of trisubstituted olefins by ring-closing metathesis (RCM) only with a limited number of olefinic substrates and generally fail in the case of tetrasubstituted counterparts. 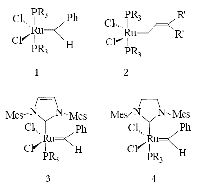 With the aim of improving their stability in solution and increasing their metathesis activity, new ruthenium complexes were created, in the following years, by replacing one or two of the phosphane groups, mainly in the benzylidene complex 1, with sterically demanding 1,3-dimesitylimidazolin-2-ylidene ligands or their fully saturated analogues, (as in complexes 3 and 4) (15-20). Nonetheless, some applications in RCM reactions, not possible with these ruthenium pre-catalysts, are still restricted to the realm of the more active and selective, but quite sensitive, Schrock molybdenum imido alkylidene complex 5 (21, 22). 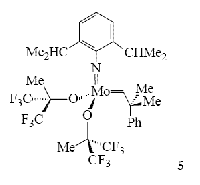 In addition to the above mentioned inconveniences, synthesis of complexes 1-4 requires rather expensive starting materials and implies caution during some of the preparation steps.

In order to eliminate these disadvantages, a series of new ruthenium complexes has recently been designed and prepared by further variations in the ligand sphere of complex 1. Thus, a novel class of ruthenium indenylidene pre-catalysts, displaying a wide application profile in metathesis chemistry, has emerged. This type of ruthenium complex which is of special interest to organic and polymer catalysis will be discussed in this paper.

The 3-phenyl indenylidene complex 6 was conveniently obtained from RuCl2(PPh3)4 and commercially available 3,3-diphenylpropyn-3-ol as the carbene precursor. Starting from complex 6, the PPh3 ligands have been readily replaced by the better donating ligands PCy3, affording the parent indenylidene complex 7 (23, 24) (Equation (i)).

Substitution of phosphane ligands in the ruthenium complexes 6 and 7 by imidazolin-2-ylidene ligands containing bulky groups in the 1 and 3 positions of the five-membered ring allowed the synthesis of further 16-electron ruthenium indenylidene complexes of improved activity and stability. Thus, the addition of 1,3-dimesitylimidazolin-2-ylidene to 3-phenylindenylidene complexes 6 and 7, in toluene at room temperature, leads to the high yield of complexes 9 and 10, respectively (26) (Scheme I).

Most conveniently, complex 10 can be prepared in hot hexane when easier isolation of the product by simple filtration (vs. evaporation of the solvent previously), followed by washing with hexane and drying, becomes possible. A similar procedure starting from 1,3-bis(2,6-di-isopropylphenyl)imidazolin-2-ylidene and 3-phenylindenylidene, 6 and 7, yielded imidazolin-2-ylidene ruthenium complexes 11 and 12, respectively (Scheme II).

Thermal stability investigations showed compound 10 and compound 12 incorporating a PCy3 ligand are very stable and do not decompose even after heating at 80°C for several days. RCM studies using diethyl diallylmalonate and diallyltosylamide as the substrates showed good catalytic activity and selectivity for ruthenium indenylidene complexes of this pre-catalyst family (yield 88% and 94% of cyclic products, respectively) (Scheme III and Scheme IV). Remarkably, these types of complexes even allow the synthesis of tetrasubstituted cycloalkenes by RCM of the corresponding dienes, a process that meets severe restrictions or is not possible with common diphosphane ruthenium alkylidene complexes (Scheme V).

It has been suggested that the alkenylcarbyne derivative 14 arises by protonation at the Cβ atom of the allenylidene ligand in complex 13 while the indenylidene derivative 15 is formed by further electrophilic substitution of the phenyl group with the rearranged Cα atom. Complex 15, generated in situ from 13 upon treatment with strong acids (HOTf, HBF4), exhibited high activity in acyclic diene metathesis (ADMET) of 1,9-decadiene, RCM of diallyltosylamide, enyne metathesis of allylpropargyltosylamide and the ring-opening metathesis polymerisation (ROMP) of cyclopentene and cyclooctene. For instance, the ADMET reaction of 1,9-decadiene, carried out in CD2Cl2 at 0°C, using the precursors HOSO2CF3 and [RuCl(p-cymene)(=C=C=CPh2)(PCy3)][CF3SO3] of the in situ generated complex 15, gave a 94% yield of polymeric compound after 12 hours (Scheme VII).

It is important to point out that in the ROMP of cyclooctene using the system [RuCl(p-cymene)(=C=C=CPh2)(PCy3)][CF3SO3]/HOSO2CF3, in chlorobenzene, an unexpectedly high yield of polyoctenamer was obtained, even after a short reaction time at room temperature (Scheme X). In contrast, starting from a less reactive monomer like cyclopentene, a maximum yield of 67% could be obtained after 1 hour at 0°C (Scheme XI).

Starting from the diphosphane indenylidene complex 7 and an aromatic salicylaldimine, the Schiff base containing ruthenium indenylidene complex 16 has been obtained in high yield (28) (Scheme XII). Complex 16 was characterised by 1H, 13C, 31P-NMR spectroscopies and elemental analysis, and successfully applied to the synthesis of enol-esters implying nucleophilic addition of carboxylic acids to terminal alkynes. Importantly, the results obtained with catalyst 16 are comparable with previously reported data for the best metathesis ruthenium catalysts (29). Related Schiff base ligated ruthenium indenylidene complexes 17 and 18 have been prepared by this procedure, characterised by 1H, 13C, 31P-NMR spectroscopy and elemental analysis, and tested for their activity in ROMP of cycloolefins and atom transfer radical polymerisation (ATRP) of vinyl monomers (30-32) (Scheme XIII).

It should be emphasised that the bidentate Schiff base ligands incorporated in this type of complex exert, due to their "dangling" propensity, a pronounced effect on both their activity and stability (32).

Ruthenium indenylidene complexes bearing different ancillary ligands in the metal coordination sphere emerge as quite efficient and versatile metathesis pre-catalysts. They proved to be rather robust and are stable even upon heating. These features are very promising for various metathetic applications. As a special bonus they allow reactions not promoted by many previous Ru catalysts, in particular the convenient synthesis of tri- and tetrasubstituted cycloalkenes, as well as RCM involving highly substituted dienes. Due to easy accessibility, enhanced activity, increased stability, and wide area of application they successfully complement conventional ruthenium complexes currently employed in the RCM of linear dienes, ADMET of α,ω-dienes, enyne metathesis and ROMP of cycloolefins.

The deuterated solvent CD2Cl2 was used in the described experiments to allow NMR monitoring of the evolution of in situ generation of the indenylidene ruthenium catalyst 15, starting from the allenylidene ruthenium complex 13 via the unstable intermediate 14. This can be seen in Scheme VI.

Complex 6a and 7a

Subsequently, the correct phenylindenylidene structure of complexes 6 and 7 has been unambiguously established from supplementary spectroscopic evidence [3]. Moreover, when the ruthenium allenylidene complexes 6a and 7a, became available from the same starting materials but through a modified procedure, their true allenylidene structure could be fully demonstrated by an elegant X-ray analysis [4]. 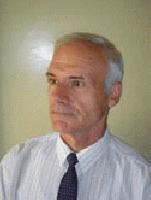 Valerian Dragutan is a Senior Researcher at the Institute of Organic Chemistry of the Romanian Academy. His research interests are homogeneous catalysis by transition metals and Lewis acids; olefin metathesis and ROMP of cycloolefins; bioactive organometallic compounds; and mechanisms and stereochemistry of reactions in organic and polymer chemistry. 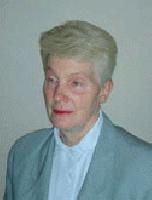 Ileana Dragutan is a Senior Researcher at the Institute of Organic Chemistry of the Romanian Academy. Her interests are in sterically hindered amines, syntheses of olefinic monomers via olefin metathesis, stable organic free radicals as spin probes for ESR of organised systems and membrane bioenergetics. She is also interested in transition metal complexes with free radical ligands. 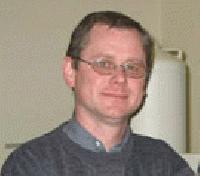