Iridium/carbon (Ir/C) films were prepared by MOCVD using iridium acetylacetonate as the precursor and some electrochemical properties were studied, in particular the effects of oxygen on the carbon content of the Ir/C films. Small additions of oxygen (4 ml min–1) to the source gas drastically decrease the carbon content of the films. Ir grains are formed, up to ~ 3 nm in diameter, in the amorphous carbon. It was found that Ir/C films with higher carbon content have better catalytic performance – for measuring the oxygen concentration – than Ir/C films with lower carbon content. The Ir/C films were used as electrodes in an oxygen concentration cell, and the sensitivity of the cell to oxygen was recorded. The Nernstian electromotive force of the cell is almost the same as that of a similar type of commercial oxygen concentration sensor from Bosch, but the response time is faster.

Noble metals are widely used as electrodes in gas sensors because of their unique physical and chemical properties, such as their inertness, good oxidation resistance, electrical conductivity and catalytic performance. However, due to sluggish charge transfer reactions at the sensing electrode interface at low temperature (less than 500ºC) (1), a gas sensor constructed with traditional Pt electrodes and ZrO2 electrolyte needs to be heated to a higher temperature to obtain sufficient voltage output and a shorter response time. In order to improve the properties of these sensors, Ir cluster films have been prepared by MOCVD (metal-organic chemical vapour deposition) and investigated (2–8). This paper reports on the composition, structure and electrochemical properties of some Ir/C films.

A schematic diagram of a horizontal hot-wall MOCVD apparatus is shown in Figure 1. The precursor for the Ir/C films was 500 mg of iridium tris-acetylacetonate, (CH3COCHCOCH3)3Ir, Ir(acac)3. Oxygen and argon were used as the reactant and transmission gases, respectively. The substrates were quartz (10 mm × 10 mm × 1 mm thick) and YSZ (yttria stabilised zirconia): 6 mol % Y2O3, (10 mm Φ × 2 mm thick). The temperature of the precursor (Tsor) was kept at 190ºC. The total gas pressure in the chamber was fixed at 500 Pa, with argon flow maintained at 50 ml min–1. The precursor was placed in a small quartz boat in the MOCVD apparatus. The deposition temperature (Tdep) was varied from 450 to 650ºC, for a deposition time of 60 minutes. The flow of oxygen (FO2) was varied from 0 to 10 ml min–1.

The composition of the deposits was analysed by X-ray photoelectron spectroscopy (XPS). The exciting source of the XPS is Al (Kα), the sensitivity factors are 4.4, 0.25 and 0.66 for Ir, C and O, respectively. The film structures were also investigated by XRD and SEM.

Schematic diagram of apparatus to measure e.m.f. values of an oxygen concentration cell. The cell has YSZ solid electrolyte and an Ir/C electrode

Figure 2 shows a schematic diagram of the measurement of the Nernstian electromotive force (e.m.f.) of the oxygen concentration cell having an Ir/C electrode attached to both sides of a YSZ solid electrolyte. Values of the e.m.f. were measured by changing the partial pressure of the oxygen at temperatures from 300 to 600ºC.

A dynamic test apparatus (9) was used to assess the performance of the oxygen sensor. The air and fuel (natural gas) were adjusted to obtain the desired λ values (normalised air/fuel ratios). The exhaust gas was usually maintained in a rich condition, at λ = 0.95. A solenoid valve allowed additional air to the burner to switch the exhaust composition quickly to lean, when λ = 1.05, then cutting off the additional air and switching back to rich.

The sensor voltage output was measured by a voltmeter having an input impedance of 107 Ω. The voltage switching response was determined using an oscilloscope, also with an input impedance of 107 Ω connected in parallel to the voltmeter. The response time was defined as the time taken for the output voltage, recorded on the oscilloscope, to sweep between 600 and 200 mV.

The effects of oxygen and temperature on the contents inside Ir/C films prepared on quartz are shown in Table I. The addition of oxygen (from 0 to 4 ml min–1) is seen to decrease the carbon content and thus increase the iridium content. There is an increasing trend of carbon content inside the films prepared without oxygen addition with increasing deposition temperature.

Films obtained with the addition of oxygen were smooth with silver-coloured surfaces: due to the oxygen reacting with carbon. The reaction products (carbon dioxide or carbon monoxide) are exhausted from the deposition chamber.

Figure 5 shows characteristic X-ray patterns of Ir wire and Ir/C film prepared under different oxygen flows. The height of the peak increases with increasing oxygen flow, indicating that the carbon content of the films is decreasing. The X-ray peaks of Ir/C films are displaced in the same direction, comparable to the X-ray peak of the Ir wire. This indicates that the states of carbon deposited in these films are the same.

Figure 6 shows characteristic XRD patterns of the Ir/C films prepared under different deposition conditions. The Ir/C film with higher carbon content has lower broader XRD peaks. Based on calculations from the half-width of the X-ray peaks, the Ir grains are ~ 3 nm in size, Fig. 6(a), consistent with direct observations by TEM (6).

Characteristics of the XRD patterns of Ir/C films prepared under different deposition conditions:

An SEM surface observation of Ir/C film deposited without addition of oxygen is shown in Figure 7. The granules on the surface of the film, etched by argon sputtering, were identified by wavelength dispersive X-ray spectroscopy (WDS), see Figure 8 and 9. These figures show that the black and white granules (in Figure 7) represent carbon and iridium, respectively. The carbon exists as an amorphous structure determined from the WDS.

SEM of Ir/C film deposited without addition of oxygen (prepared at Tdep = 550ºC, FO2 = 0 ml min–1). The upper arrow indicates a black granule and the lower a white granule formed in the Ir/C films 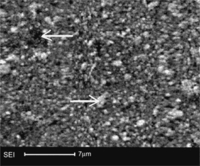 The relationship between e.m.f. values at different temperatures and the ratio of the oxygen partial pressures (P1/P2) in the oxygen concentration cell is shown in Figure 10. The Ir/C film electrodes were deposited under various conditions. P1 is fixed at 0.1 MPa. The theoretical values are calculated from the Nernstian equation (10):

where R is the gas constant, F is the Faraday constant and T is the absolute temperature.

Lastly, the response curves of the commercial sensor (BOSCH LSH6) and the oxygen concentration cell constructed with Ir/C film and YSZ are shown in Figure 11. The voltage outputs are almost identical, but the response time of the cell is shorter than that of the sensor.

Relationship between e.m.f. values and the oxygen partial pressure ratio of the oxygen concentration cell

Ir/C films were prepared by MOCVD using iridium acetylacetonate as the precursor. Small additions of oxygen to the source gas greatly decrease the carbon content of the films. Ir grains are formed up to ~ 3 nm in diameter by the amorphous carbon. Ir/C films with higher carbon content have better catalytic performance than Ir/C film of lower carbon content. The electrochemical properties of the oxygen concentration cell using Ir/C films as the electrodes is almost the same as that for a commercial sensor, but the response time is shorter.

A research programme is currently being undertaken to use the Ir/C films as electrodes for commercial sensors.

This project was supported by National Natural Science Foundation of China, Grant No. 50171031, and Yunnan Scientific Project (Program No. 2003 PY10). The authors would like to thank Mr Y. Wang and Senior J. M. Yang for their help with sample preparation and SEM observation, respectively. 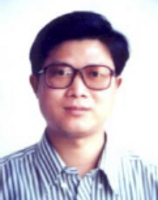 Professor Changyi Hu is Professor of Materials Science at the Research and Development Center, Kunming Institute of Precious Metals, China. His major work is the preparations of films and coatings of precious metals and work pieces of refractory metals by MOCVD and CVD.

Jigao Wan is a Senior Researcher in the Functional Materials Division, Kunming Institute of Precious Metals, China. His current research is on oxygen gas sensors and other sensors.

Dr Jiaoyan Dai is an engineer at the Institute of Materials and Engineering, Central South University, China. Her interests include CVD of precious metal films, catalysis of precious metals and electronic materials.