A simple low cost hydrothermal method is described for producing thin films of porous platinum. The films are formed from [Pt(NH3)4]Cl2 and comprise platinum agglomerates ~ 200–300 nm in size with internal grains of ~ 20–60 nm.

Thin metal films, especially those of the platinum group metals, are of interest to the semiconductor industry and to material engineering. They can be used, for instance, in optics, in optoelectronics, in the processes of micro- and ultrafiltration, as electrodes and as anticorrosion layers, and as the catalytic materials in chemical sensors (1–5).

Several methods of producing platinum films are known. The oldest involves spreading a thin layer of a solution containing a platinum salt onto a glass surface and then burning off at "dark heat" (~ 400ºC) (6). Metal can also be deposited onto various supports from solutions of platinum salts, complexes or compounds by chemical or electrochemical reduction. In addition, platinum can be sputtered cathodically or evaporated in vacuo onto supports.

There is now more interest in depositing films onto supports by adsorption processes or by gas phase reactions of platinum compounds, that is chemical vapour deposition (CVD). Modified methods, such as plasma-enhanced or plasma-assisted, thermal laser-assisted, photolytic CVD, are also available (7).

To obtain free thin platinum films using the above methods the support must be removed. The support has to be dissolved in acids, such as HF (in the case of glass, Si, or SiO2), HNO3 (if the platinum is deposited onto metals such as silver or gold) or in water (if platinum was evaporated onto the surface of NaCl crystals). The thin platinum films obtained usually contain impurities from the carrier.

However, if the films are obtained from precursors that contain carbon, then carbon is always a contaminant, and this narrows their applications. Carbon can be removed by burn-off, but this requires temperatures higher than 400ºC. The films, which consist of fine thermally-unstable crystallites recrystallise during burn-off. During recrystallisation the size of the crystallites increases. Also, in the case of porous films, the size of the pores increases.

We have now produced porous platinum films by heating aqueous solutions of [Pt(NH3)4]Cl2 at concentrations of 3–60 g dm–3 for several hours in cylindrical tubes of glass or quartz of 10 mm diameter in a pressure reactor at 8–10 atmospheres and a temperature of 170–180ºC (8). Films were formed at the interface between the vessel and the [Pt(NH3)4]Cl2 solution phase. The films consisted of mutually-joined platinum agglomerates of size ~ 200–300 nm, with spaces of similar dimensions between them. The films let through light (of wavelengths 200–2200 nm). The films, of surface area up to several tens of cm2, could be easily removed from the liquid and freely placed on a different support, such as ceramic, glass or plastic. The amount of platinum in the films weighed from 3 to 120 g m–2 (related to the wide range of platinum salt concentrations from 3 to 60 g dm–3). Film area was measured from the surface area of the vessel moistened by the aqueous platinum solution. The high purity of the films was confirmed by energy dispersive spectroscopy. The platinum films are shown in Figure 1; they were not brittle nor easily torn and were easy to flatten.

Thin platinum films as removed from a cylindrical glass tube. The film can be easily flattened and cut 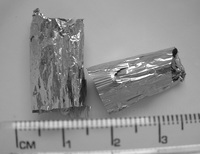 TEM image of platinum film obtained from aqueous [Pt(NH3)4]Cl2 solution at concentration of 3 g dm–3. The film formed inside a vessel of surface area 26 cm2. The film is 140 nm thick with agglomerates ~ 200 to 300 nm

Figure 2 shows an electron microscopy image. The thickness of the film depends on the ratio of the [Pt(NH3)4]Cl2concentration to the surface of the vessel wetted by the solution.

TEM image of the platinum film in Figure 2, but at higher magnification. The platinum agglomerates are composed of fine grains of size 20–60 nm

The platinum agglomerates comprise grains of size 20–60 nm. These dimensions were determined from the TEM image shown in Figure 3. The average size of the crystallites, D, forming the film was 35 nm, calculated from X-ray line broadening of the (111) line, using the Scherrer formula:

where k is a constant (k = 0.9), λ is the X-ray wavelength (0.15418 nm), β is equal to the full width at half-maximum (FWHM) intensity of the diffraction line and θ is the angle of diffraction. The average crystallite sizes obtained from XRD data were in good agreement with corresponding TEM measurements. The size of the crystallites increase ~ 10–20 % during reordering and recrystallisation after heat treatment up to 1000ºC.

It is interesting that platinum films obtained from solutions of much higher concentrations of [Pt(NH3)4]Cl2, which are much thicker (for example, 5500 nm at concentrations of 60 g dm–3) and impervious to the TEM electron beam, also consist of fine crystallites of average size ~ 37 nm, as found by X-ray diffraction.

The grain sizes in platinum films produced by this route from [Pt(NH3)4]Cl2 solutions appear to be independent of film thickness. We believe that this method of obtaining porous platinum films could be widely used. It is very simple, proceeds in mild conditions and gives reproducible results. Such platinum film may find application in filtering or possibly as catalytic material. 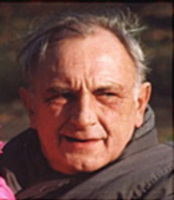 Józef Wrzyszcz is Professor of Chemistry at the Institute of Low Temperature and Structure Research, Polish Academy of Sciences, Wroclaw. His research interests include petrol chemistry, heterogenous catalysis, and new materials for catalytic applications. 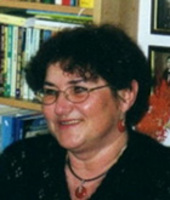 Dr Hanna Grabowska is a Researcher in the Laboratory of Catalysis at the Institute of Low Temperature and Structure Research, Polish Academy of Sciences, Wroclaw. Her interest is heterogeneous catalysis, particularly catalytic synthesis of alkylated hydroxyarenes. 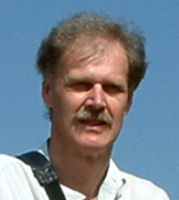 Dr Miroslaw Zawadzki is a Researcher in the Laboratory of Catalysis at the Institute of Low Temperature and Structure Research, Polish Academy of Sciences, Wroclaw. His research includes the synthesis of nanomaterials, especially under solvo/hydrothermal conditions, and their application as catalysts or active matrixes. 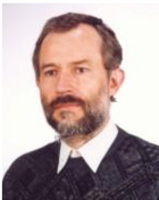 Leszek Kepinski is an Associate Professor of Chemistry at the Institute of Low Temperature and Structure Research, Polish Academy of Sciences, Wroclaw. He is head of the Division of Nanomaterials Chemistry and Catalysis and the Laboratory of Electron Microscopy. He studies the relationship of microstructure to properties of highly dispersed systems: thin metal film, heterogeneous catalysts, nanoparticles.

Ludwina Krajczyk is a Specialist in Electron Microscopy at the Institute of Low Temperature and Structure Research, Polish Academy of Science, in Wroclaw. Her work is to apply transmission electron microscopy techniques (conventional and high resolution TEM and selected area diffraction) in materials research.