It is well known that for noble metal particles supported on certain oxides, catalytic activity and selectivity for certain reactions such as CO hydrogenation can be strongly enhanced by pre-reduction. This results in the migration of atoms from the support to the surface of the noble metal particle itself to build up a partial monolayer, and is known as the strong metal-support interaction (SMSI) effect. However, in general it has always been thought that some exposed metal surface atoms are necessary to allow chemisorption and subsequent reaction.

Now, for the first time, we have shown that the complete encapsulation of noble metal particles by a reactive support also leads to good activity and excellent selectivity for the water gas shift (WGS) reaction (1).

Using solution microemulsion techniques we have made CeO2-encapsulated platinum (Pt) and Pt/Au (platinum/gold) particles and tested their WGS activity against Pt/CeO2 catalysts made in more conventional ways. In contrast to the conventional catalysts, very few exposed Pt surface sites were found when CO was used as a probe to detect any surface Pt. On testing the catalyst using a typical WGS feed, better activity was found than with conventional catalysts, and more importantly there was no evidence of the competing reaction of methanation. This provides the strongest evidence of effective encapsulation of the Pt particles.

Characterisation of the encapsulated particles by UV spectroscopy showed a correlation of activity with CeO2 electronic structure suggesting that the presence of Pt enhances the ability of CeO2 to undertake redox chemistry and hence become active for the WGS reaction. Therefore, the encapsulation of noble metal particles by reactive oxide coatings such as CeO2 represents a new class of catalytic material which has the ability to be tuned to achieve good activity and selectivity.

David Thompsett is a Scientific Consultant responsible for the Electrotechnology & Catalyst Preparation Department at the Johnson Matthey Technology Centre, U.K. His interests include fuel cells, catalyst preparation and characterisation, and the relationship between catalyst activity and structure. E-mail: thompd@matthey.com 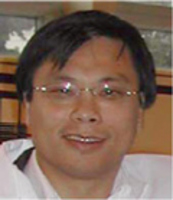 S. C. Edman Tsang is Professor of Nanomaterials and Catalysis at the University of Reading, U.K. He is interested in fundamental and applied aspects of novel nanosize materials as heterogeneous catalysts, solid state absorbents and sensors, which includes synthesis, testing and characterisation of these materials. E-mail: s.c.e.tsang@reading.ac.uk