Plaque to Osmium and Iridium Discoveries

Plaque to Osmium and Iridium Discoveries

In 2003, two papers were published in this Journal celebrating the bicentenaries of the discovery and isolation of rhodium and palladium by William Hyde Wollaston (1766–1828) (1) and of osmium and iridium by his friend Smithson Tennant (1761–1815) (2). A shorter paper on the four discoveries was published in Chemistry World (3) and led to a BBC Radio 4 broadcast (4).

Tennant was born in Selby, a town some 30 km south of York. During preparation of the Chemistry World paper, I contacted a local historian, Richard Moody, about locating Tennant's birthplace. My enquiry inspired him to interest Selby Civic Society in persuading the local council to erect a plaque to this eminent son. The chairman of the Society, Philip Milsom, found that Tennant was born at 12 Finkle Street (2) in the centre of Selby, close to the Abbey where he was baptised. The building is now the “Elizabethan” pub, retaining much of its eighteenth century appearance. 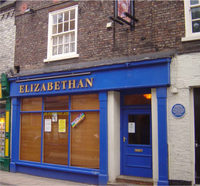 Eventually, a blue plaque was erected on the building, and unveiled on 9 November, 2005. It is probably true to say that the papers (1, 2) catalysed this event. This plaque is the only one in the U.K., and possibly in the whole world, to commemorate the discovery of any of the six platinum group metals (pgms). 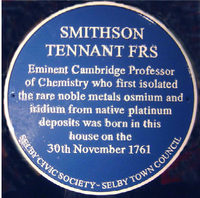 Although British chemists have discovered twenty elements (a greater number than any other nation) there appears to be only one other plaque in the U.K. to commemorate such a discovery. The other is a Royal Society of Chemistry Historical Chemical Landmark plaque erected at University College, London, in 2004 to commemorate the isolation of the noble gases by Sir William Ramsay.

Clearly, Wollaston also merits a plaque. The house in which he spent the last four years of his life, 1 Dorset Street, Marylebone, London, does bear a plaque, but only to his friend Charles Babbage (inventor of the Analytical Engine) who bought the house in 1829.

Bill Griffith is Professor of Inorganic Chemistry at Imperial College, London. He has considerable experience with the platinum group metals, particularly ruthenium and osmium. He has published over 260 research papers, many describing complexes of these metals as catalysts for specific organic oxidations. He has written seven books on the platinum metals, and is the Secretary of the Historical Group of the Royal Society of Chemistry.