On 15th February 2006, the world of photographic art was astonished by the sale price of a single photographic print by Edward Steichen (1879–1973): at $2.928M it was more than twice the previous record price paid for any photograph [a]. Steichen's print, entitled “The Pond – Moonlight”, dates from 1904 and is described as “multiple gum bichromate over platinum”. The print was sold at auction by Sotheby's Holdings Inc., of New York, to an unidentified private collector [b]. The vendor, The Metropolitan Museum of Art, New York, had recently acquired the print among its purchase of the celebrated collection of the Gilman Paper Company [c].

The ‘Met’ already possessed another print of this image, hence the decision to offer it for sale. A third print is held by The Museum of Modern Art in New York, and was presumably also made from the same negative. This one is entitled “Moonrise – Mamaroneck, New York” (platinum, cyanotype and ferroprussiate print).

The Steichen (Lot 6 at Sotheby's sale) was not the only platinum metals print for which a price record was broken: on this occasion Lot 11, a palladium print by Alfred Stieglitz (1864–1946) [d], entitled “Georgia O'Keeffe (Hands)”, dating from 1918, realised $ 1.472M – triple its estimated sale price. This is a record for a Stieglitz work. Another of Stieglitz's serial portraits of O'Keeffe, a ‘conventional’ silver-gelatin print from 1919 (Lot 13), realised $ 1.36M. Although Stieglitz began printing this series of portraits in platinum in 1917 [e], he was soon obliged to turn to palladium and silver papers. Platinum had been declared a strategic material during World War I and commercial platinotype paper then became unavailable.

One could speculate how far these extraordinary prices for photographic prints might be attributable to the use of platinum metals in their preparation. However, this question is not easily answered because the perceived value of such objects has several contributory factors. 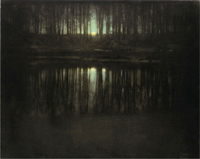 Another Moonrise on Long Island 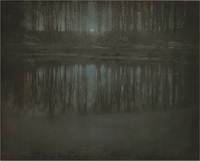 This print of the pond on Long Island is held in the MoMA collection in New York. It was, from its description, made by a somewhat different process: the basis was the same – a platinotype – but after this had been completely processed, Steichen recoated the print with a cyanotype (also known as ferroprussiate or blueprint process) sensitiser and reprinted the accurately re-registered negative. This had the result of laying down an image in Prussian blue on top of the platinum image, to modify its colour and density.

The process of photographic printing in platinum and palladium has been outlined recently in Platinum Metals Review [f]. It is clear that this specialist medium demands more hand crafting skills than the usual procedures of silver-gelatin photography [g]. Also, the product can be regarded as an art object and as archivally permanent, thanks to the inertness of platinum. Platinum images provide a vast range of grey monochrome tonality, but this did not satisfy Steichen artistically. A processed platinum print on plain paper of the finest quality is receptive to over-printing using other photographic media, such as ‘gum bichromate’ or cyanotype, and this is what Steichen did.

In the gum bichromate process, an aqueous solution of gum arabic (gum acacia) is used as a viscous binder for the chosen artists' pigments. It is mixed with a soluble dichromate before brushing onto the paper. On exposure to light through the re-registered negative, the chromium(VI) is photochemically reduced to chromium(III), which hardens the gum by crosslinking its macromolecular structure, so making it insoluble and trapping pigment proportionally in those regions where the light falls. Excess pigmented gum is removed by washing in water. The whole negative-working process may then be repeated with a different pigment. The platinum tonality is thus enriched by the addition of colour and luminosity. This ‘painterly’ but photographic method, once known as ‘photo-aquatint’ is now called gum dichromate.

The subtlety and complexity of handcrafted prints, such as Steichen's, represent a high point in photographic art. However, even given the specialist skills demanded, most of the value so conspicuously attached to them must derive from the status of the artists themselves.

The names of the American photographers, Edward Steichen and Alfred Stieglitz, are prominent in the history of the ‘modernist movement’ in photography, and its battle for recognition as ‘fine art’ [h]. Steichen and Stieglitz co-founded the élite ‘Photo-Secessionist’ circle. Both men, through their exhibitions, fostered an appreciation of the avant-garde, and were seminal figures in art in the U.S.A. Later, Steichen curated the international photographic exhibition “The Family of Man”.

As there are three examples of the Steichen print, it cannot be uniqueness that has raised the price. These factors surely include the size of the image. “The Pond – Moonlight” at around 16 × 20 inches is very large for a platinum print which can only be made by contact-printing. To achieve this a same-sized negative is required, taken either by a gigantic camera, or by enlargement in the darkroom. By contrast, the Stieglitz prints of the time are of more usual dimensions, about 7.4 × 9 inches. In determining the ‘collectability’ of a photograph, the emotional and aesthetic appeal of the image and its subject matter are powerful factors. In this print we have an impressionistic, dark landscape (at a village on Long Island, New York) of a tree-lined reflective pool illuminated by the moon rising between the branches – an evocative example of the romantic pictorial symbolism typical of the modernist genre, and so well suited to the favourite medium of the day – platinotype. 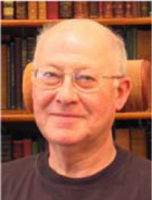 Michael J. Ware is a chemist with a D.Phil. from the University of Oxford. He currently studies the history, science, art and conservation of ‘alternative’ photographic processes. He received the Hood Medal of the Royal Photographic Society for work on printing in noble metals. He is a consultant to the National Museum of Photography, Film and Television. He exhibits his photographic work, runs workshops, and publishes papers and books, for instance, on Talbot's photogenic drawing process (1994) and Herschel's cyanotype process (1999). His books on Herschel's chrysotype – photography in gold – are due out soon. http://www.mikeware.co.uk/