The Discoverers of the Palladium Isotopes

The Discoverers of the Palladium Isotopes

THE THIRTY-FOUR KNOWN PALLADIUM ISOTOPES FOUND BETWEEN 1935 AND 1997

Of the thirty-four known isotopes of palladium, six occur naturally with the following authorised isotopic abundances (2):


These naturally occurring isotopes were discovered by Arthur J. Dempster in 1935 (3) at the University of Chicago, Illinois, using a new mass spectrograph made to his design, although only the mass numbers were observed. The actual isotopic abundances were determined for the first time in the following year by Sampson and Bleakney (4).

In 1935, using slow neutron bombardment, Amaldi et al. (5) identified two palladium activities with half-lifes of 15 minutes and 12 hours. The latter value appeared to confirm a half-life of 14 hours that had been obtained earlier that year by McLennan, Grimmett and Reid (6). In 1937, Pool, Cook and Thornton (7) obtained similar half-lifes of 18 minutes and 12.5 hours, and Kraus and Cork (8) were able to show experimentally, in that year, that these two activities belonged to 111Pd and 109Pd, respectively. Other slow neutron bombardment activities found for palladium, such as a half-life of six hours discovered by Fermi et al. in 1934 (9) and half-lifes of 3 minutes and 60 hours discovered by Kurchatov et al. (10) in 1935 do not appear to have been confirmed.

In 1940, Nishima et al. (11) obtained an unspecified activity with a half-life of 26 minutes which is also likely to have been 111Pd. The actual half-life of 111Pd is now known to be 23 minutes, so the different values obtained above are probably indicative of calibration problems.

These unspecified activities raise problems concerning the precedence for treating each discovery in this paper. Once the properties of an isotope are established and it is obvious that an unspecified activity must have been due to this particular isotope, then the activity is assigned to that isotope and can be regarded as being “the discovery”. However, using the definition that the primary criterion for discovery is the determination of both the atomic number and the mass number, these unspecified activities are included here only in the Notes to the Table that accompanies the Table of The Discoverers of the Palladium Isotopes.

Literature manuscript dates and conference report dates can be either the actual year of discovery or close to it, so when they are placed in the public domain these dates can be considered as being the “year of discovery”. However complications arise with internal reports, especially if they represent the actual discovery, since they may not become publicly known until several years later. In these cases the historical date must obviously take precedence over the public domain date. As an example, Brosi’s discovery of 103Pd (12, 13) was given in an unpublished internal report dated July 1946 and was not mentioned publicly until its inclusion in the 1948 “Table of Isotopes” (14). Therefore the discovery was not placed in the public domain until 1948, although 1946 is obviously the proper historic year and must be treated as the actual “year of discovery”. 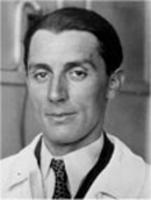 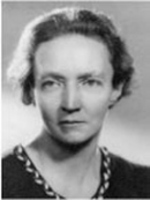 Born in Paris, Irène Curie was the daughter of scientists Pierre and Marie Curie, and therefore it was hardly surprising that she was academically brilliant. She became her mother's assistant at the Radium Institute, Paris, when only 21 years old and showed excellent aptitude in the use of the laboratory's instrumentation.

Frédéric Joliot was also born in Paris and in his twenties studied at the major Paris industrial engineering school, the École Supérieure de Physique et de Chimie Industrielle, under the tutelage of the physicist Paul Langevin, a friend of Marie Curie. Langevin suggested that Joliot should be considered for a post at the Radium Institute. Here Joliot met Irène Curie, who he married in 1926, adopting the surname Joliot-Curie.

After Frédéric had carried out major work to improve the sensitivity of the Wilson cloud chamber for detecting charged atomic particles, the Joliot-Curies became interested in the work of the German physicists Walther Bothe and Hans Becker who had noted that strong radiations were emitted when light elements were bombarded with alpha particles. The Joliot-Curies owned the major source of alpha particles available at that time – polonium which had accumulated over many years at the Radium Institute. They used this source to bombard aluminium foil, and found first neutron emission, followed by a long period of positron radiation. They concluded that they had produced a new isotope of phosphorus of mass 30, compared to mass 31 found in natural phosphorus, and that the positron emission represented the decay of this isotope. This is the first example of the production of an artificial radioactive isotope. The discovery was announced in January 1934, and for this work they were awarded the 1935 Nobel Prize in Chemistry. Now, more than seventy years later, there are over 2700 artificial radioactive isotopes.

Like many physicists in the late 1930s the Joliot-Curies carried out research on nuclear fission that eventually led to both the atom bomb and nuclear power. After the war Frédéric convinced the French government to set up its own Atomic Energy Commission and he became its first High Commissioner. Irène succeeded her mother in becoming the Director of the Radium Institute. However, this was the time of the Cold War and Frédéric had strong left-wing political views. In 1950 Frédéric was dismissed from his post. Undaunted, both put great effort into helping to set up a large particle accelerator and laboratory complex at Orsay, south of Paris (Institut de Physique Nucléaire d'Orsay). This is now considered to be one of the major physics institutes in the world.

Irène died in 1956 and Frédéric in 1958, both from diseases related to prolonged exposure to radiation.


A technique is used for light and medium-heavy nuclides in which the nuclide fragments from a nuclear reaction are guided into a time-of-flight mass spectrometer.

The atomic numbers and the mass numbers of the detected nuclides can be determined by measuring: the total kinetic energy of the beam, the loss in energy when the beam is injected into an ionisation chamber and the actual time of flight. The determination of these numbers satisfies the criterial of discovery.

For detection in the mass spectrometer, the lifetimes of the nuclides must exceed 500 nanoseconds and must therefore be particle stable. It is expected that particle unstable nuclides, that is those that emit protons for the lighter isotopes of an element and those which emit neutrons for the heavier isotopes, are likely to have extremely short half-lifes in this mass region. If, statistically, a nuclide should have been detected by the sensitivity of the technique, but was not, then it is likely to be particle unstable and thus can also satisfy the criteria of discovery, especially if it confirms theoretical predictions. None of the lighter and heavier palladium isotopes discovered by this technique have proved to be particle unstable, so the proton and neutron drip lines have not yet been reached for this element.

Selected half-lifes in 'The Table of the Discoverers of the Palladium Isotopes' are from the revised NUBASE database (16), except for those of masses 120 to 124 which are from the later measurements of Montes et al. (56). The criteria for discovery are generally those adopted in the review on platinum (1).

John W. Arblaster is Chief Chemist, working in metallurgical analysis on a wide range of ferrous and non-ferrous alloys for standards in chemical analysis, at Coleshill Laboratories in the West Midlands of England. He is interested in the history of science and in the evaluation of the thermodynamic and crystallographic properties of the elements.