On 3rd May 2007, two Royal Society of Chemistry National Chemical Landmark plaques were unveiled at Imperial College London (IC), by Sir Richard Sykes FRS, the Rector of the college, and by Professor Jim Feast FRS, President of the Royal Society of Chemistry. They commemorate two past Nobel Laureates: Sir Geoffrey Wilkinson FRS, 1921–1996, (see Figure 1), and Sir Derek Barton FRS, 1918–1998. Both had been students at IC; both left and returned some fifteen years later to take up professorial chairs there. The unveiling event also formed part of the Centenary celebrations (1) for the college, which was founded in 1907 by merging the Royal College of Science, the Royal School of Mines and the City and Guilds College. Some 150 people attended; there was a reception afterwards and a dinner for thirty of the guests. 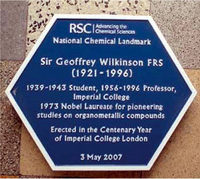 Barton did innovative and distinguished work on the conformational analysis of complex organic molecules. Here we concentrate on Sir Geoffrey Wilkinson (Figure 2), who devoted much of his research to platinum group metals (pgms) chemistry (indeed some 200 of his 557 publications concern the pgms). Virtually all his pgm research used materials from the Johnson Matthey Loan Scheme, so it was fitting that Dr Barry Murrer, Director of the Johnson Matthey Technology Centre, Sonning Common, U.K., was present at the unveiling ceremony and the dinner. An exhibition of Wilkinson memorabilia included a model of ferrocene presented to him by IC inorganic chemists on the occasion of his 25th year at IC in 1981, and rhodium-plated by Johnson Matthey (Figure 3). This neatly symbolises both the work for which he won his Nobel prize (on ferrocene and other organometallic compounds) and his subsequent rhodium and other pgm work. 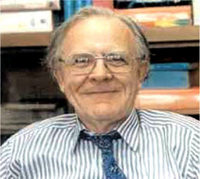 The model of the ferrocene structure presented to Geoffrey Wilkinson on the occasion of his 25th year at Imperial College (1981), and rhodium-plated by Johnson Matthey 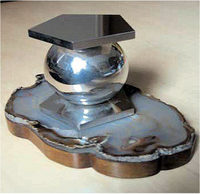 Wilkinson's early life and scientific work are outlined in Reference (2). In 1955, at the age of only 34, he was appointed to the chair of Inorganic Chemistry at IC. Highlights of Wilkinson's time at IC include his Fellowship of the Royal Society in 1965, Nobel Prize in 1973 and knighthood in 1976. He became head of the Chemistry Department in the same year. He formally retired in 1988, but until the day before he died in 1996 he continued doing innovative research with a dedicated team.

His work on transition metal and organometallic chemistry was wide-ranging and led to applications of coordination complexes to organic catalysis. Here we concentrate on the significant and innovative work which he carried out with the pgms. The following account draws in part from two earlier sources written by the present author and Wilkinson's first Ph.D. student, Malcolm Green (2), and with other ex-students (3).

Without the support of Johnson Matthey, who provided him with pgms (2) under their Loan Scheme, a generous contribution to science enduring to this day, Wilkinson could have done little research in the area. He knew well four Johnson Matthey stalwarts of that time – Leslie Hunt, Henry Connor, Frank Lever (who instigated the Loan Scheme in 1955) and A. R. Powell, and co-published with the latter two in the 1960s. In 1964 he wrote a prescient article for Platinum Metals Review on ‘Organometallic Compounds of the Platinum Metals’ (4). A frequent visitor to the Johnson Matthey Technology Centre, he would sometimes leave his and his colleagues’ pgm residues there in a supermarket shopping bag. In 1988 Johnson Matthey provided him with a spacious ‘Johnson Matthey Research Laboratory’ at IC, and here he and a dedicated small group of talented students continued innovative research until his death in 1996 – he went to that laboratory, as was his daily practice, until the day before he died.

Wilkinson used to talk of the ‘three R's’ – rhodium, ruthenium and rhenium. He isolated a short-lived 106Rh isotope, a fission product of 235U, while working at the University of California, Berkeley, and in 1953 made salts of the [Cp2Rh]+ and [Cp2Ir]+ cations. In 1961 he did some laboratory work himself (5) (something which always terrified his students), reacting cis- and trans-[RhCl2(en)2]+ with Na(BH4) in a test-tube over a Bunsen burner, giving the new [RhHCl(en)2]+ cation as a foaming brown solution – this he brandished around, calling out “Who wants a Ph.D.?”. With that Johnson Matthey wizard of practical chemistry, A. R. Powell, he isolated salts of the new hydrides [RhH(NH3)5]2+ and [RhH(H2O)(NH3)4]2+ in 1966 (6).

In 1965 he found that fac-RhCl3(PPh3)3 converted hex-1-ene to n-heptaldehyde with H2 and CO under pressure at 55°C (7). The catalyst was difficult to make, and it was during these preparations that RhCl(PPh3)3 was isolated; this is now universally known as Wilkinson's catalyst, 1, (8). This versatile material effects the hydrogenation of alkenes, hydrogen transfer reactions, hydrosilation, hydroacylation, decarbonylation, hydroformylation, hydroboration, oxidation, and bond cleavage of organic materials. His full paper of 1966 describing its discovery and the realisation that it would, with molecular hydrogen, catalyse the hydrogenation of alkenes, is a classic, despite its uncharacteristically overlong and completely unpunctuated title (9). This was a turning point in his career, perhaps more significant than his elucidation of the ferrocene structure. Although not mentioned in his Nobel citation, this work probably contributed to the case for the prize.

At around the same time Wilkinson realised that the hydroformylation reactions seemingly catalysed by RhCl(PPh3)3 were actually due to the known RhH(CO)(PPh3)3, 2, (10, 11). Among many other reactions, this species catalyses the hydroformylation of propylene to n-butyraldehyde (a PVC precursor). This was one of his most important contributions to industry.

Wilkinson was chagrined by the fact that it was his rival (though co-Nobel laureate) Ernst Fischer who first made osmocene, Cp2Os, in 1958. As with iridium, he came to osmium chemistry late in his career, but made up for this with his preparation of the astonishing tetrakis(tbutylimido) osmium species, 3, a catalyst for amination reactions (19, 20).

These received less attention from Wilkinson, although he was particularly proud of his transmutation of platinum to gold, a feat which caught the public imagination with the headline: ‘Scientist Discovers Goldmine in the Cyclotron’, in the San Francisco Chronicle, 1948. This may have been because these metals are less versatile in their oxidation states than the other four, but he did some seminal work with reactions of M(PPh3)3 (M = Pd, Pt) (21) and with the nitrosyl (22) and carboxylate complexes (11, 23) of the two metals.

Wilkinson made many contributions to chemistry, many of them concerned with the pgms, and was a prime contributor to what was (in those heady days) called the renaissance of inorganic chemistry. He was fortunate to have been associated with the atomic bomb project, assimilating profound chemical knowledge from that experience, and to have lived at a time when one could still do research for its own sake. He used his knowledge well, with a remarkable instinct for the new experiment, the new area of research, producing really original and creative new science.

Bill Griffith is Professor of Inorganic Chemistry at Imperial College, London. He has considerable experience with the platinum group metals, particularly ruthenium and osmium. He has published over 270 research papers, many describing complexes of these metals as catalysts for specific organic oxidations. He has written seven books on the platinum metals, and is the Secretary of the Historical Group of the Royal Society of Chemistry.