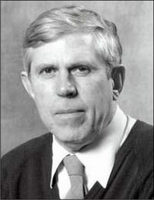 Frederick Alastair Lewis died in Belfast, Northern Ireland, on 22nd May 2007 after a long illness. He had been a frequent contributor to Platinum Metals Review. Born in Belfast in 1926, Fred served in the Royal Navy during the Second World War. After his naval service (1944–47), he began the study of Chemistry at Queen's University, Belfast, which culminated in his Ph.D. degree under the direction of Professor A. R. Ubbelohde. He subsequently carried out postdoctoral studies at Imperial College, London, again under the direction of Professor Ubbelohde. While at Imperial College, Fred and Ubbelhohde coauthored the book, “Graphite and Its Crystalline Compounds” (1). In 1956 Fred returned to Queen's University as a Lecturer and later became a Reader in Inorganic Chemistry.

During his career at Queen's, Fred carried out research on metal-hydrogen systems and specifically on palladium and its alloys. His 33 contributions to Platinum Metals Review (2–34) included numerous review articles; his first, ‘The Hydrides of Palladium and Palladium Alloys’, was published in 1960 (2) and his last in 2003 (33), ‘Uphill Effects on Hydrogen Diffusion Coefficients in Pd0.77Ag0.23 Alloy Membranes’, coauthored with Tong, Cermák and Bell. His paper of 1982, ‘The Palladium-Hydrogen System’ (11) is particularly frequently cited.

Fred played a unique role by attending conferences which were often not well attended by other Western European scientists. Some examples were the “First International Workshop on Stress and Diffusion”, Balatonfüred, Hungary, 1995 (25), “Hypothesis III” symposium, in St. Petersburg, Russia, 1999 (31), “Hydrogen Treatment of Materials”, HTM-2001, Donetsk-Mariupol, Ukraine, 2001 (32), and the “Second International Symposium on Safety and Economy of Hydrogen Transport”, IFSSEHT-2003, Sarov, Russia, 2003 (34). Useful reports on these conferences by Fred appeared in Platinum Metals Review (25, 31, 32, 34).

Fred participated in the “Hydrogen Treatment of Materials” conferences held in Donetsk, Ukraine, organised triannually since 1995 by Professor V. A. Goltsov of the Donetsk State Technical University, Ukraine (26, 30, 32). Professor Goltsov is a recognised authority on H diffusion in Pd and other metals. Professor Goltsov has referred to the phenomenon of uphill diffusion of H in Pd as the ‘Lewis Effect’ because it was first observed and characterised by Fred Lewis and his coworkers (35). Fred first observed this phenomenon in 1983, he realised its importance, and, with international coworkers, X.-Q. Tong, R. Burcur, B. Baranowski, K. Kandasamy, Y. Sakamoto and others, actively pursued it until his retirement. An official award was given to Fred in 2001 by the International Association for Hydrogen Energy (IAHE) and the Permanent Working International Scientific Committee on Hydrogen Treatment of Materials (PWISC HTM) in recognition of the Lewis Effect (36).

Award of gold medal and diploma to Fred Lewis on behalf of the IAHE and PWISC HTM in 2001 (Courtesy of Donetsk National Technical University, Ukraine) 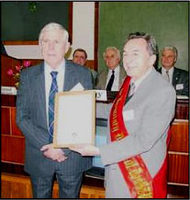 The book “The Palladium-Hydrogen System” was written by F. A. Lewis and published in 1967 by Academic Press (37). Palladium alloys and isotopes of hydrogen were also included in the book which has continued as a valuable reference forty years after its publication. Fred was very meticulous about citing references properly which makes this book and his many review articles valuable for searches of the literature. In 2000, Fred with Kandasamy and Tong published a book-length review (295 pages), entitled ‘Platinum- and Palladium-Hydrogen’, in “Hydrogen in Metal Systems II”, Solid State Phenomena, Scitec Publications, Zürich (38). This constituted a useful update of his earlier book. Fred and A. Aladjem edited the series of reviews, Parts I and II, which included his article with Kandasamy and Tong. Reviews by other scientists in this series covered most metals which absorb hydrogen.

In 1985 Fred organised an “International Symposium on Hydrogen in Metals” held in Belfast (39). The Symposium was well attended and considered to be very successful. The proceedings were published in Zeitschrift für Physikalische Chemie Neue Folge (40), and then as a book (41). The editor of the journal at that time was Ewald Wicke, Director of the Institute of Physical Chemistry, University of Münster, Germany. Fred and Professor Wicke collaborated in the editing of the symposium papers for the published proceedings in the Zeitschrift. A long friendship developed between the two scientists as a result of this collaboration.

Fred will be missed by his many scientific friends because he was an excellent scientist and a jovial, kind-hearted person.

Ted Flanagan was a postdoctoral worker with Fred Lewis at Queen's University, Belfast, from 1957 to 1959; he had an enjoyable and productive time. The collaboration with Fred resulted in twelve papers in the area of H2 absorption by Pd and its alloys. After that, Flanagan spent two years at Brookhaven National Laboratory, Upton, New York, and then joined the University of Vermont, Burlington, Vermont, where he has remained. Flanagan's main interests have been in the area of metal, alloy and intermetallic-H systems. Following in the footsteps of his collaboration with Fred Lewis, his special interests have been Pd- and Pd alloy-H systems. Flanagan received his B.S. from the University of California, Berkeley and his Ph.D. from the University of Washington, Seattle. He subsequently received a Ph.D. honoris causa from Uppsala University (1992) for his research on H in Pd-based compounds such as Pd6P. He is on the Editorial Advisory Board of the Journal of Alloys and Compounds and the Materials Science Forum. Although he is now an Emeritus Professor, he has continued his research on metal-H systems.