Ultrasonic Study of Osmium and Ruthenium

Ultrasonic Study of Osmium and Ruthenium

Ultrasonic properties of two platinum group metals, osmium and ruthenium, are presented for use in characterisation of their materials. The angle-dependent ultrasonic velocity has been computed for the determination of anisotropic behaviour of these metals. For the evaluation of ultrasonic velocity, attenuation and acoustic coupling constants, the higher-order elastic constants of Os and Ru have been calculated using the Lennard-Jones potential. The nature of the angle-dependent ultrasonic velocity is found to be similar to those of molybdenum-ruthenium-rhodium-palladium alloys, Group III nitrides and lave-phase compounds such as TiCr2, ZrCr2 and HfCr2. The results of this investigation are discussed in correlation with other known thermophysical properties.

Osmium (Os) and ruthenium (Ru) belong to the platinum group metals (pgms). Both Os and Ru are hard, brittle and have poor oxidation resistance. Both metals are mostly produced from mines in the Bushveld Complex, South Africa. Trace amounts of Os are also found in nickel-bearing ores in the Sudbury, Ontario region of Canada, and in Russia, along with other pgms. Os oxidises easily in air, producing poisonous fumes, and is the rarest of the pgms. Ru is also found in ores with other pgms in Russia, and in North and South America. Ru is isolated through a complex chemical process in which calcination and hydrogen reduction are used to convert ammonium ruthenium chloride, yielding a sponge. The sponge is then consolidated by powder metallurgy techniques or by argon arc welding. Ru is mostly used in hard disks and in alloys with platinum for jewellery and electrical contacts. It also has increasing use in catalysis (1). Os and Ru were discovered in 1804 (2) and 1844 (3), respectively.

Magnetic measurements of Ru and Os have been made by Hulm and Goodman (4). Savitskii et al. (5) investigated the microstructural, physical and chemical properties of these metals, and their mechanical properties have been explored by Buckley (6). Os and Ru both possess a hexagonal closed packed (h.c.p.) structure (6). Barnard and Bennett (7) studied their oxidation states.

The investigation of ultrasonic properties can be used as a non-destructive technique for the detection and characterisation of a material's properties, not only after production but also during processing (8–10). However, none of the work reported in the literature so far is centred on the ultrasonic study of Os and Ru. Thus, in the present work, we have studied the ultrasonic properties of these metals. Ultrasonic attenuation, velocity and related parameters have been calculated for use in non-destructive testing (NDT) characterisation.

The higher-order elastic constants of h.c.p. structured materials can be formulated using the Lennard-Jones potential, φ(r), Equation (i):

where a0, b0 are constants; m, n are integers and r is the distance between atoms (11). The expressions of second- and third-order elastic constants are given in the set of Equations (ii):

Basal Plane Distance, a, and Axial Ratio, p, for Osmium and Ruthenium*

[i] * All values obtained from Reference (6)

Second- and Third-order Elastic Constants for Osmium and Ruthenium

The Young's modulus ‘Y’ and bulk modulus ‘B’ were evaluated using the second-order elastic constants presented here. It is obvious from Table II that there is good agreement between the calculated values from this study and the previously reported values for the Young's modulus and the bulk modulus (6, 12, 13). It is observed that the higher-order elastic constants of Os and Ru are analogous to those of gallium nitride and indium nitride, respectively (14). All the second- and third-order elastic constants for Ru are found to be higher than those of Mo-Ru-Rh-Pd alloys (11). Thus we conclude that our calculated higher-order elastic constants and theory are correct and justified. The bulk modulus of Os is found to be higher than that of its nitride and carbide (15). The values of C11 for the face centred cubic (f.c.c.) structured pgms, Pd and Pt, are 1.8 × 1011 Nm−2 and 2.2 × 1011 Nm−2, respectively (16). The high elastic modulus reveals that Os and Ru have low adhesion power and high hardness. Thus these metals are suitable for applications such as sliding electrical contacts, switches, slip rings, etc.

Plot of ultrasonic velocity ‘V’, against angle with unique axis ‘θ’ of osmium and ruthenium 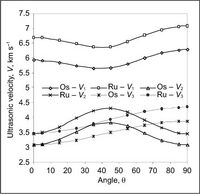 The longitudinal ultrasonic velocities of Os and Ru (see Figure 1) for wave propagation along unique axis are given in Table III, together with their sound velocities (17, 18). The nature of the ultrasonic velocity curves in these h.c.p. metals is similar to other h.c.p. structured materials (11, 14, 19). Comparison with these sources verifies our velocity results. The anomalous maxima and minima in the velocity curves are due to the combined effects of the second-order elastic constants. The angle-dependent velocities of Ru are greater than those of Mo-Ru-Rh-Pd alloys (11) due to the higher values of the elastic constants for Ru. Thus calculated results of ultrasonic velocities can be used for anisotropic characterisation of Os and Ru metals.

where f is the frequency of the ultrasonic wave; V is the ultrasonic velocity for longitudinal and shear waves as defined in Equations (iii)–(v); E0 is the thermal energy density; T is the temperature and γij is the Grüneisen number: i and j are the mode and direction of propagation. The Grüneisen number for a hexagonal structured crystal along the <001> orientation or θ = 0° is a direct consequence of the second- and third-order elastic constants. CV is the specific heat per unit volume of the material. The acoustic coupling constant ‘D’ is the measure of acoustic energy converted to thermal energy and is given by Equation (vii):

where Ω is solid angle. The integration is over all directions and the summation is over the three acoustic branches. The propagation of the longitudinal ultrasonic wave creates compression and rarefaction throughout the lattice. The rarefied regions are colder than the compressed regions. Thus there is a flow of heat between these two regions. The thermoelastic loss ‘(α)Th’ can be calculated with Equation (x):

The thermoelastic loss for the shear wave has no physical significance because the average of the Grüneisen number for each mode and direction of propagation is equal to zero for the shear wave. Only the longitudinal wave is responsible for thermoelastic loss because it causes variation in entropy along the direction of propagation.

The thermal conductivities of the selected metals are taken from the literature (6). The values of the specific heat per unit volume ‘CV’ and energy density ‘E0’ are obtained from the American Institute of Physics Handbook (20). The thermal relaxation time ‘τ’ and Debye average velocity ‘VD’ are evaluated from Equations (viii) and (ix) and are shown in Figure 2. The ultrasonic attenuation coefficients are calculated from Equations (vi) and (x). Calculated acoustic coupling constants ‘D’ and ultrasonic attenuation coefficients ‘(α/f2)’ are presented in Table IV. 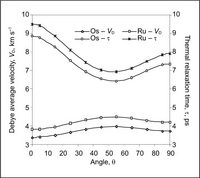 The total attenuation is given by Equation (xi):

The pulse echo technique (PET) can be used for the measurement of ultrasonic velocity and attenuation of materials, because it avoids heat loss and scattering loss. This method provides results with good accuracy and would provide useful information when combined with the theory presented here. For Ru, PET can be used directly for measurement. The high precision indirect approaches such as resonant ultrasound spectroscopy (RUS) and novel digital pulse echo overlap techniques can be used for the measurement of ultrasonic velocity in Os (21). By ultrasonic velocity measurements, the anisotropic mechanical properties of a material can be understood as they are related to velocity. This enables quality assurance of products made with these materials in combination with other materials to be carried out by measurements of ultrasonic attenuation, not only after production but also during processing.

The adopted method for theoretical study of higher-order elastic constants is justified for the pgms. The high values of the elastic constants of the h.c.p. metals Os and Ru provide evidence of their low adhesive power and high hardness. The results of the elastic constants substantiate the superiority of h.c.p. metals over f.c.c. metals in this regard. The anisotropic characterisation of the chosen metals can be carried out on the basis of directional ultrasonic velocity and thermal relaxation time. The phonon-viscosity mechanism is the dominant cause of total attenuation in these metals. The acoustic coupling constant is a governing factor for total attenuation. The mechanical behaviour of Ru is expected to be better in terms of durability and ductility than that of other pgms due to its low attenuation.

The results obtained in this investigation can be used for further study of these metals. Our whole theoretical approach can be applied to the evaluation of ultrasonic attenuation and related parameters to study the microstructural properties of h.c.p. structured metals. 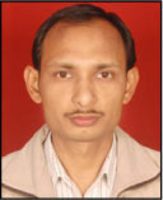 D. K. Pandey is a Lecturer in the Department of Applied Physics, AMITY School of Engineering and Technology, New Delhi, India. His main activities are in the field of ultrasonic characterisation of condensed materials and nanofluids. 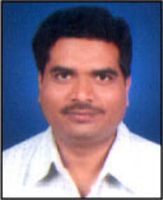 Devraj Singh is a Lecturer in the Department of Applied Physics, AMITY School of Engineering and Technology, New Delhi. His research interest is the ultrasonic non-destructive testing (NDT) characterisation of condensed materials. 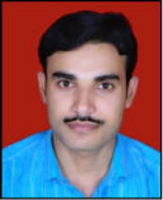 P. K. Yadawa is a Lecturer in the Department of Applied Physics, AMITY School of Engineering and Technology, New Delhi. His major field of interest is the ultrasonic characterisation of structured materials.