The third Novel Chiral Chemistries Japan (NCCJapan) Conference and Exhibition was held in Tokyo on 18th and 19th April 2009 (1). The second meeting had been held in 2007 (2) and the first in 2006. All meetings in the series have followed a similar format, with keynote addresses and supporting lectures, although this time there were some dual presentations in which two speakers from the same company gave complementary talks on slightly different topics within a single time slot. Professor Takao Ikariya (Tokyo Institute of Technology, Japan) and his team, in particular Kyoko Suzuki, must be congratulated for the excellent job they did to ensure that the conference ran smoothly. As in previous meetings, Professor Ikariya put together an exciting mix of speakers from both academia and industry across the world. There were around 130 attendees, with the majority being from Japan.

During the coffee and lunch breaks there was an exhibition by companies with products mainly associated with chiral chemistry. The exhibitors ranged from companies that provide biocatalysts and chemical catalysts including ligands, to chromatography, chemistry services and instrument manufacturers.

The opening keynote address was given by Professor Yoshiji Takemoto (Kyoto University, Japan) on asymmetric catalysis with multifunctional ureas. The reactions described included asymmetric versions of the Michael and Mannich reactions, hydrazination and the aza-Henry reaction with 1,3-dicarbonyl compounds, as well as Petasis-type additions to quinolines and conjugate additions to enones.

The second keynote address was given by Professor Jan-Erling Bäckvall (Stockholm University, Sweden). This lecture covered his work on the simultaneous use of bio- and chemocatalysis to enable dynamic kinetic resolutions (DKR) to be carried out. The initial work was performed with secondary alcohols. The readily available enzyme, Candida antarctica lipase B (CALB) (Novozym® 435), which is derived from a yeast, is used to acylate one enantiomer of a secondary alcohol. A ruthenium catalyst then racemises the unreacted enantiomer. Initially the Shvo catalyst, 1, was used but the racemisation is slow and requires heating to give acceptable reaction rates. Use of the monomeric ruthenium catalyst 2 provides faster reactions, even at ambient temperatures. 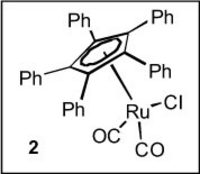 CALB provides the (R)-acetate, while a specially treated subtilisin Carlsberg enzyme gives the (S)-product ester. With 1,3-dihydroxy compounds, the selectivity of the enzyme ensures high selectivity for the (R,R)-diacetoxy product. However, due to the slow racemisation rates with the Shvo catalyst system, significant amounts of meso-products were formed with 1,4- and 1,5-diols. Use of the faster catalyst 2 alleviates this problem. Analogous uses of the concept have been employed for the DKR of chlorohydrins, amines and allenic alcohols.

The third keynote address was given by Professor Hisashi Yamamoto (University of Chicago, U.S.A.) on the uses of Brønsted acids in organic synthesis. The emphasis of the talk was on the use of triflimide, (CF3SO2)2NH, as a superacid that can regenerate itself during a Mukaiyama aldol reaction. The use of the tris(trimethylsilyl)silyl (TTMS) group as a ‘super silyl’ group also makes the enol ether more reactive.

In addition to these keynote addresses there were fifteen other presentations. Topics included the uses of biocatalysis, transition metal catalysis and the synthesis of target molecules, among others. In line with the emphasis of this publication, those talks relating to the use of platinum group metals (pgms) have been highlighted.

Fred Hancock (Johnson Matthey Catalysis and Chiral Technologies, U.K.) gave an overview of some case histories in which Johnson Matthey had looked for an appropriate catalyst to perform an asymmetric transformation. He described the advantages of chemocatalytic and enzymatic methods for the reduction of carbonyl compounds for a number of example systems. The reduction of aryl ketones can be achieved in high yield and with high enantioselectivity by the system RuCl2[(R)-P-Phos][(S)-DAIPEN], 3a and 4, in a manner analogous to the method developed by Noyori (3). The use of this system with xyl-P-Phos, 3b, was illustrated for a pharmaceutical application as part of the synthesis of Nycomed's imidazo[1,2-a]pyridine BYK-311319. The P-Phos family of ligands can also be used in the catalyst system [RuCl2(P-Phos)(DMF)n] (DMF = N,N-dimethylformamide), for the reduction of α,β- and γ,δ-enoic acids for pharmaceutical applications, such as in the preparation of an intermediate for Solvay's SONU 20250180. α,β-Enoic acids can also be reduced by an iridium or rhodium catalyst with Me-BoPhoz™, 5, as the chiral ligand or by a rhodium–Xyl-PhanePhos, 6, system. 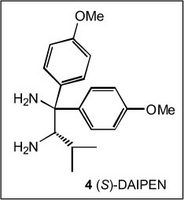 André de Vries and David Ager (DSM, The Netherlands and U.S.A., respectively) gave a joint presentation. de Vries described the advantages of performing asymmetric hydrogenations of unsaturated carbon–carbon multiple bonds with a rhodium catalyst using the MonoPhos™ family of ligands, 7 (4). The method can be automated, which allows for rapid screening of products. Higher reaction rates and enantioselectivities can be observed when two different monodentate ligands are used at the same time. This has resulted in an economical process for the preparation of part of Novartis’ renin inhibitor, Aliskiren. The phosphoramidite MonoPhos™ ligands are also useful for the reduction of carbonyl groups, including β-keto esters, with ruthenium as the metal. Iridium systems with phosphoramidites can be used to prepare phenylalanines by asymmetric hydrogenation, and also provide high selectivity in the reduction of imines. Ager discussed enzymatic methods to prepare cyanohydrins with high enantioselectivity, and the development of the industrial production of DSM's PharmaPLE™, a recombinant pig liver esterase that can be used in pharmaceutical applications. 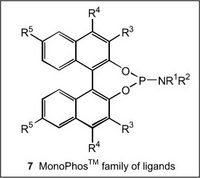 Professor Andreas Pfaltz (University of Basel, Switzerland) continued the asymmetric hydrogenation theme with his iridium-catalysed asymmetric reduction of unfunctionalised alkenes in the presence of P,N-ligands. In addition to the well-established system 8, which can be used with a wide variety of alkene substitution patterns, the phosphinooxazolines, 9, have also proven useful, particularly with trisubstituted alkenes. For this class of reductions, it is particularly important to use a non-nucleophilic counterion for the metal, such as tetra[3,5-bis(trifluoromethyl)phenyl]borate (BArF).

Kunihiko Murata (Kanto Chemical Co, Inc, Japan) described the development of the ruthenium-based asymmetric transfer hydrogenation catalyst 10 for the reduction of ketones, which removes the need for a chiral phosphine ligand. The diamine provides the asymmetry. This catalyst can also be used to carry out asymmetric Henry and Michael reactions.

Ian Lennon (Chiral Quest, Inc, U.K.) described the chemistry and uses of a number of ligand systems developed by Chiral Quest. C3-TunePhos, 11, provides excellent enantioselectivity for the reduction of β-keto esters. The analogue C3*-TunePhos, 12, extends this to ketones and α-keto esters as well as retaining its selectivity with β-keto esters. TangPhos, 13, has proven to be a useful ligand in the rhodium-catalysed reduction of dehydroamino acids, itaconates and enamides. The latter class of compounds can now be accessed from oximes by a rhodium-on-carbon-catalysed hydrogenation in the presence of acetic anhydride. The analogue of TangPhos, DuanPhos, 14, provides excellent stereoselectivity for the reduction of functionalised aryl alkyl ketones, while BINAPINE, 15, provides access to β-amino esters.

Christophe Le Ret (Umicore AG & Co KG, Germany) described a different aspect of asymmetric hydrogenation: the formation of metal–ligand complexes and the influence of the metal precursor. For rhodium, an example ligand was MandyPhos™, 16. For the asymmetric reduction of (Z)-acetamidocinnamic acid methyl ester, with Rh(nbd)2 (nbd = 2,5-norbornadiene) as the metal source, in situ formation of the catalyst or the use of the P,N-complex gave a slower hydrogenation rate than the P,P-complex system. With ruthenium, it was found that the use of bis(η5-2,4-dimethylpentadienyl)ruthenium(II), 17, was superior for complex formation with MandyPhos™ and other ferrocene-based ligands.

Wataru Kuriyama (Takasago International Corp, Japan) described the synthesis of chiral alcohols by the catalytic reduction of esters. The system is based on a ruthenium–diamine complex, 18. For high enantioselectivity, the stereogenic centre has to be present in the substrate, as it is in α-alkyl, β-amino, β-alkoxy, β-hydroxy and α-hydroxy esters. The key to success was performing the reactions in the absence of base. 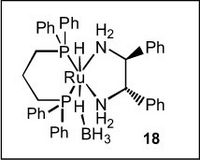 Professor Ken Tanaka (Tokyo University of Agriculture and Technology, Japan) presented on rhodium-catalysed [2 + 2 + 2] cycloadditions for the preparation of axial chiral aromatic compounds. The products can be biaryl systems or others with hindered rotation, such as benzamides. The ligands used for the reactions are BINAP, 19, and derivatives, such as H8-BINAP, 20, and SEGPHOS®, 21.

David Chaplin (Dr Reddy's Laboratories Ltd, U.K.) described asymmetric hydroformylation reactions. Linear products are most commonly formed from an achiral hydroformylation reaction, but the product aldehydes can be substrates for a wide variety of reactions. For an asymmetric version of the reaction, regioselectivity as well as enantioselectivity must be considered, as the branched aldehyde is usually the required product because it generates the stereogenic centre. This problem can be exacerbated if the alkene is not terminal. A screening exercise showed that the DiazaPhos-SPE diazaphospholane ligand system, 22, was the best to prepare a bistetrahydrofuran with good diastereoselectivity in the presence of a rhodium-based catalyst, Scheme I. 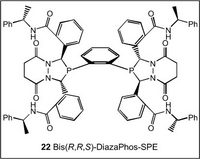 Hans-Ulrich Blaser and Garrett Hoge (Solvias AG, Switzerland) gave a joint presentation. Blaser described the extensive Solvias ligand families, mainly based on the ferrocene skeleton. New ligands that have been prepared and are currently being evaluated are Kephos, 23, Fengphos, 24, Chenphos, 25, and Jospophos, 26. Hoge explained how Solvias performs ligand screenings and illustrated the methodology with a number of practical examples including the reduction of acrylic acids and ketones. 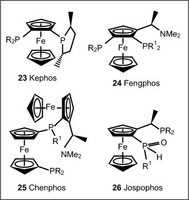 Professor Bernhard Breit (Albert-Ludwigs-Universität Freiburg, Germany) uses the concept of self-assembly to prepare bisphosphine ligands by dimerisation of monophosphines, such as 6-diphenylphosphinyl-2(1H)-pyridinone (6-DPPon), 27. The dimeric ligand can be used to achieve high ratios of linear products in the hydroformylation of terminal alkenes. Use of an organocatalyst such as L-proline with an aldehyde and an alkene under hydroformylation conditions provides 1,3-diols with good enantioselectivity. The self-assembly concept has been extended to chiral ligands in which the phosphorus moiety provides the asymmetry, such as 3-DMPICon, 28, and 3-BIPICon, 29. As with the reductions using DSM MonoPhos™, the use of monodentate ligands allows for synergistic effects when two different ligands are used in asymmetric hydrogenations. 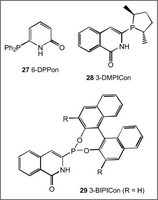 Yongkui Sun (Merck & Co, Inc, U.S.A.) described some case studies on the use of asymmetric hydrogenations for drug synthesis at Merck. The final step in the synthesis of sitagliptin, 30, is an asymmetric hydrogenation to give the β-amino amide. The use of a ferrocene ligand has been superseded by the use of a ruthenium–DM-SEGPHOS® (SEGPHOS® with P(xyl)2 groups in place of PPh2) catalyst, with the β-keto amide in the presence of ammonium salicylate as the amine donor. Examples of enzymatic reactions, such as ketone reductions, transaminations and the formation of cyanohydrins were also given.

Professor Mikiko Sodeoka (RIKEN Advanced Science Institute, Japan) described asymmetric reactions of metal enolates primarily based on the use of palladium, with DM-SEGPHOS® as the chiral ligand. A wide range of reactions give high enantioselectivities including Michael, aldol, Mannich and α-fluorination reactions. For the last class of reactions, use of N-fluorobenzenesulfonamide, (PhSO2)2NF, (NFSI) as the fluorinating agent provides the best selectivity.

As with the other meetings in this series, NCCJapan 2009 was held just before CPhI Japan (5), allowing participants to attend both. There was sufficient time between lectures and at the banquet to allow for interaction between the participants, exhibitors and speakers. As noted above, a wide variety of methodology was covered, much associated with the use of transition metal catalysis, and in particular the use of pgm-based systems with phosphine ligands. As in the previous meetings, there was a good balance between the discovery of new methods and the industrial application of existing techniques. This conference series deserves to continue to grow and prosper and Professor Ikariya hinted that the next one might have the title Novel Chiral Chemistries Asia. I wish him well with this endeavour and look forward to another excellent meeting. 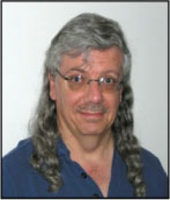 David Ager has a Ph.D. (University of Cambridge), and was a post-doctoral worker at the University of Southampton. He worked at Liverpool and Toledo (U.S.A.) universities; NutraSweet Company's research and development group (as a Monsanto Fellow), NSC Technologies, and Great Lakes Fine Chemicals (as a Fellow) responsible for developing new synthetic methodology. David was then a consultant on chiral and process chemistry. In 2002 he joined DSM as the Competence Manager for homogeneous catalysis. In January 2006 he became a Principal Scientist.