Initially these reactions used simple Pd catalysts such as palladium chloride and palladium acetate, often in conjunction with a ligand. However, the need to carry out more challenging coupling reactions (for example those using less reactive aryl halides or pseudohalides, including aryl chlorides) has resulted in the development of more advanced Pd catalysts (1, 2).

Therefore an alternative method for removing the residual Pd is required. Scavengers such as Smopex® can be used to recover platinum group metals (pgms) including Pd down to parts per billion (ppb) levels. Smopex® is a fibrous material with a polypropylene or viscose backbone grafted with functional groups that can selectively remove the pgms from solution (Figure 1). The fibres can carry a metal loading of up to 10 wt%, and the loaded fibres can then be collected and sent for traditional refining to recover the precious metal (3).

(a) Smopex®, a fibrous material with a polypropylene or viscose backbone; (b) Schematic representation of the functional groups (red) located on the surface of the Smopex® fibres (3) 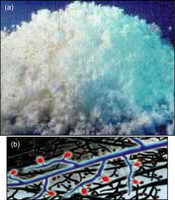 The choice of scavenger for a particular process depends on several factors. These include the oxidation state of the Pd catalyst, the nature of the solvent system (aqueous or organic), the presence of byproducts or unreacted reagents in solution and whether the scavenger will be applied in a batch process or continuous flow system. Some examples of Smopex® fibres that can be applied under different conditions are shown in Figure 2. 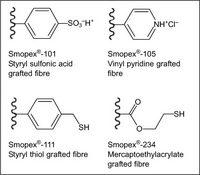 Prior to using a scavenger in a particular process, it is common practice to screen a selection of scavengers to determine the most selective individual or combination of scavengers. Properties including the type of scavenger used (based on metal species), amount of scavenger used (based on concentration), and effects of solvent and permitted temperature will be investigated and optimised, as well as the kinetics and flow system requirements. Data is also available on the scavengers which are known to perform best for specific reactions (4), and this can be used to make a recommendation on the scavenger that is likely to offer the best recovery in each case.

The process stream from a Suzuki coupling reaction using the catalyst trans-dichlorobis(triphenylphosphine)palladium(II) (PdCl2(PPh3)2) in toluene was analysed and found to contain 100 parts per million (ppm) of Pd as well as triphenylphosphine and inorganic salts. For Pd present following a reaction using PdCl2(PPh3)2, thiol-based scavengers are known to be the most suitable as they are able to break down any Pd complexes in the solution and bind strongly to the metal. An excess of Smopex® was applied for the initial screening process at a rate of 1 wt% Smopex® for 100 ppm Pd.

In this case toluene was used as the process solvent, therefore hydrophobic fibres were recommended. A process temperature of 80°C was used in the coupling step, but the preferred stage for Pd recovery was after the washing step, at a slightly lower temperature of 60°C. Screening was carried out using Smopex®-111 and Smopex®-234, both thiol-based scavengers (see Figure 2). In both cases, 1 wt% of Smopex® was stirred at 60°C for 1 hour, the liquor was then filtered off and the filtrate was found to contain <2 ppm Pd when Smopex®-111 was used, and <5 ppm with Smopex®-234. After further optimisation it was determined that the amount of Smopex® could be reduced by half if 3 hours' contact time was applied.

A process stream from a tetrakis(triphenylphosphine)palladium(0) (Pd(PPh3)4)-catalysed coupling reaction with tetrahydrofuran as the solvent was analysed and found to contain 30 ppm of Pd. In this case, the Pd was present as both Pd(II) and Pd(0) and therefore two different scavengers were tested. Scavenging conditions of 60°C for 1 hour were again applied, and a first pass with Smopex®-105 (an anion exchanger) gave 85% Pd recovery. A further treatment with Smopex®-101 (a cation exchanger) recovered the additional 15%, giving an overall recovery of 100%. In some similar cases a thiol fibre such as Smopex®-111 can give total recovery on its own, but where this is not achievable, a mixture offers another way to achieve full recovery of the Pd.

The widespread use of Pd catalysts for coupling reactions continues to precipitate a requirement for Pd scavenging of the product solution. Metal scavengers such as Smopex® fibres can be used with a wide variety of processes to recover Pd, other pgms or base metals down to ppb levels, and offer a viable alternative to traditional procedures such as product recrystallisation.

Stephanie Phillips is the Product Specialist for Smopex® working for Johnson Matthey's Chemical Products and Refining Technologies at Royston, UK. Stephanie has worked in Sales and Marketing since 2001 and has been involved with the development and marketing of the Smopex® range of products since that time. Stephanie has a BSc in Chemistry and an MSc in Analytical Chemistry.