“The Story of Platinum”

“The Story of Platinum”

A new DVD documentary, “The Story of Platinum”, has been produced in South Africa by Neels de Klerk, an independent video producer with experience in the South African gold, coal and platinum mining industries. The documentary grew from de Klerk's interest in the subject, and his desire to illustrate to workers in the platinum industry how their contribution fits into the bigger picture (1). To paint this picture in full required the collaboration of many international companies, including Anglo Platinum in South Africa and Johnson Matthey in the UK. The production of the DVD was sponsored by TWP Holdings, a company which provides engineering and consulting services to the mining industry. All proceeds from its sale will go to the South African Institute of Mining and Metallurgy (SAIMM) Scholarship Trust Fund, a charity which aims to promote careers in the minerals industry and supports deserving students in relevant disciplines who are in need of financial assistance (2).

The DVD is presented in two parts, each of approximately 45 minutes' duration. The first part summarises the history of platinum, from the first recorded encounters in the 16th century to the discovery of platinum in the Bushveld Complex in the early 20th century, and finally the establishment of full refining facilities in South Africa. The second part of the documentary deals in more detail with the processes involved in extracting platinum from its ore, and also briefly discusses the metal's many applications.

The Discovery of a New Metal

The historical part of the story of platinum is illustrated in the DVD documentary using photographic stills and drawings, and is told in such a way that interest never flags.

It provides an overview of modern man's association with platinum, from the first discovery of an unworkable silvery metal contaminating South American gold mines in 1557, to the naming of platinum as a separate element in 1777 and its first successful melting in 1782. This scientific progression is echoed by the commercial exploitation of the new metal: initially used only to adulterate gold in the 16th and 17th centuries, it gained increasing status and was considered a decorative and desirable metal in its own right by the time of Louis XVI of France.

The discovery of geological deposits of platinum is traced from the metal's first occurrences as a byproduct in gold or nickel mines in Russia and the Americas, to the eventual discovery in the 1920s of a primary platinum deposit in the abundant reserves of the Bushveld Complex in South Africa (Figure 1). The detail behind the exploitation of these reserves is vividly recounted, as are the many ups and downs in the course of the metal to its current position of economic significance.

Panning for platinum in the eastern Bushveld in South Africa in 1924. Dr Hans Merensky (centre), after whom the Merensky Reef is named, looks on (3) 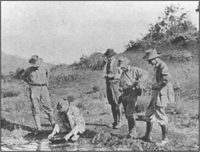 The decorative uses for the metal were not what ultimately drove growth in demand for platinum. The documentary recounts how, in the early days of platinum mining in South Africa, supply had to be controlled to avoid flooding the market. After the Second World War, when the price of platinum suddenly escalated due to its use as a catalyst in the production of gasoline, it became clear that much of the value of the metal lay in its great industrial utility. As many new applications for platinum were discovered, demand rapidly increased and production expanded to keep pace. South Africa became the world's leading supplier of platinum, and today accounts for around 80% of annual global platinum production.

The Processing of Platinum

The second part of the documentary is an overview of the complex process that turns platinum ore into platinum metal. Even from the fertile Merensky Reef of the Bushveld Complex about ten tonnes of rock are needed to obtain a single ounce of platinum. How the ore is extracted from the earth and subsequently treated to yield its metal content (Figure 2) is described in some detail in the DVD, which will doubtless be of considerable value as an educational tool in mining and metallurgy.

The concentrate product obtained from froth flotation. After the ore is mined, it is crushed, mixed with water and milled down to a fine size to liberate the valuable minerals from the host rock. Once these minerals are free, their natural hydrophobicity is enhanced to allow the particles to adhere to the surface of air bubbles, which rise to the surface and leave behind most of the unwanted material. This is only one of many processes that must be carried out to produce platinum metal, all of which are discussed in the documentary 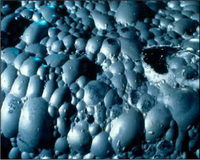 For anybody wishing to gain insight into the history and production of platinum, this documentary is very informative and provides an excellent overview. The DVD costs R100 plus postage and there is also a commemorative montage poster which costs R150; these can be obtained from the SAIMM in South Africa, by contacting Julie Dixon by E-mail at julie@saimm.co.za, or phoning +27 11 834 1273 (2).

“The Story of Platinum” LINK http://www.saimm.co.za/news/102-twp-holdings-story-of-platinum-dvd

Margery Ryan is the Editorial Assistant on Platinum Metals Review. She holds a BSc in Chemical Engineering from the University of Cape Town and has previously worked in refining and mineral processing at Impala Platinum, South Africa. She joined Platinum Metals Review from Johnson Matthey Noble Metals, where she had been working as a Laboratory Technician since 2006.