Monolayer Fe films deposited on Pt(111) at 487 K were investigated using STM and XPS. The surface composition and structure of Fe/Pt(111) were analysed during stepwise annealing under vacuum. Surface Fe was driven into the subsurface above 800 K, resulting in a Pt-skin surface of Pt/Fe/Pt(111). Oxidation of the Pt-skin structure in O2 produced a FeO surface structure, FeO/Pt(111). This was transformed into a surface Fe structure by reduction in H2 at 600 K and into subsurface Fe by further reduction at 800 K. The transformation of surface Fe (FeO) and subsurface Fe in Pt(111) was shown to be reversible in cycled oxidation and reduction. The structures of Fe/Pt(111), Pt/Fe/Pt(111) and FeO/Pt(111) can be transformed one into the other.

The elevated temperature (250°C) volumetric H2 sorption behaviour of Mg thin films catalysed by the title catalysts was investigated. Sorption of H2 by Mg catalysed by Pd was determined and used as the baseline. Sorption cycling demonstrated that with Pd and Pd/Fe the sorption kinetics of the Mg films rapidly degraded. However with Pd/Nb, Pd/Ti and Pd/Ta the composite remained cycleable. After multiple sorption cycles Pd/Nb and Pd/Ti had the fastest kinetics. NbH0.5 and TiH2 were formed during testing and identified by XRD.

Pd–dibenzylideneacetone (Pd–dba) catalyst precursors with water-solubilising substituents have been developed, which yielded molecular weights in a Suzuki polycondensation that were superior to those obtained with traditional catalyst systems. The polycondensations were carried out in CH2Cl2/H2O in the presence of K3PO4. While their performance still did not match that of bis[tri(o-tolyl)phosphine]palladium(0), these Pd–dba complexes are claimed to offer advantages in terms of atmospheric stability and handing convenience.

Ru nanoparticle/MWCNT catalysts with various Ru loadings (1 wt%, 3 wt% and 5 wt%) were prepared by reduction with H2 or NaBH4 for selective hydrogenation of soybean oil at 338 K and initial pressure of 1.066 MPa. These catalysts were characterised using TEM, XRD, N2 adsorption–desorption and H2-TPD techniques. The Ru particles were dispersed more homogeneously on the surface of the MWCNTs after being reduced with H2. The catalysts with 3 wt% and 5 wt% Ru loadings had higher hydrogenation activity. The NaBH4-reduced catalyst had higher cis-isomer selectivity.

Adsorption and Desorption of SOx on Diesel Oxidation Catalysts

The deactivation of NO oxidation by SO2 was investigated using commercial DOCs coated on cordierite monolith; with Pt/Al2O3 as a reference material. The maximum NO conversion for the fresh DOCs was 38% at 350°C. Under typical exhaust gas conditions (1 ppm SO2, 250°C), the DOCs functioned as sulfur traps. The SOx storage involved a fast saturation of the catalyst surface with H2SO4, which hampered NO conversion, and a slow, long-lasting sulfation of the washcoat. The storage capacities of the DOCs reached their maxima at 250°C. Adsorbed H2SO4 desorbed between 350°C and 400°C, whereas more stable compounds, such as Al2(SO4)3, decomposed at higher temperatures. Deactivated DOCs could be regenerated at >350°C. Repeated or longer thermal treatments resulted in a reduced sulfur storage capacity and irreversible activity losses for NO oxidation due to sintering.

Pt supported on CeO2, Pr6O11, Eu2O3 and Gd2O3 catalysts were prepared and their NOx SCR characteristics using H2 were studied under 10 vol% excess O2. Only Pt/CeO2 exhibited good NO conversion (∼80%) with ∼40% N2 selectivity. The other catalysts showed little NOx reduction activity due to the high solid basicity of their supports. In situ DRIFTs measurements for NOx reduction on Pt/CeO2 showed the presence of NO3− species, indicating that the reduction proceeds via formation of this nitrate.

The TWC 0.4 wt% Rh/CeO2-ZrO2 was prepared by impregnation of CeO2-ZrO2 (with different Ce:Zr molar ratios) with a Rh(III) nitrate solution, followed by drying and calcination at 600°C for 5 h in air. High-temperature ageing of the catalysts was generally carried out by oscillatory change of the reaction gas composition between stoichiometric and lean at 1000°C for 25 h. The effect of ageing on the activity of Rh/CeO2-ZrO2 for the NO–C3H6–O2 reaction was dependent on the Ce:Zr molar ratio. The activity of Rh/CeO2-ZrO2 with a Ce:Zr molar ratio of 74:26 was significantly enhanced by the ageing, due to the formation and stabilisation of active reduced Rh species and a change in the surface properties of CeO2-ZrO2 which inhibited the formation of formate species that would poison the catalytically active sites.

A 1 cm2 constant flow glucose-O2 fuel cell was prepared based on Pt-RuO2 anode catalysts and Pt cathode catalysts. Operation at various glucose concentrations revealed the presence of a region of the polarisation curve in which additional polarisation led to a decrease in current rather than the expected increase. The appearance of this polarisation loss is proposed to be due to the adsorption of byproduct lactones to the Pt-RuO2 surface.

(Au1−xPtx)25Ag75 alloys 1 were prepared by inductive melting (x = 0.1 and 0.2) or repeated arc melting (x = 0.5). The alloys were annealed at 950°C for >72 h and then quenched in water. Nanoporous Au1–xPtx alloys were formed by dealloying 1 in 1 M HClO4 solution, using a pseudo Ag/AgCl reference electrode. Uniform and fine nanoporous structures were formed with no indication of bulk phase separation. Dilatometry experiments demonstrated electrochemical actuation with a large reversible strain amplitude.

Effect of CaCl2 Hydrothermal Treatment on the Bone Bond Strength and Osteoconductivity of Ti–0.5Pt and Ti–6Al–4V–0.5Pt Alloy Implants

Soluble mononuclear Pt compounds (1–4) in which the non-leaving groups are linked with ‘bone-seeking’ bisphosphonate tetraethyl esters were synthesised. X-Ray crystallography was used to determine the crystal structures of 2 and 3. In cytotoxicity assay against human osteosarcoma (MG-63) and ovarian cancer (COC1) cell lines, 2 and 4 demonstrated much higher activity than 1 and 3, which is correlated to the length of the linkers between the chelating moiety and the bisphosphonate esters. An apoptotic assay of 4, the compound with highest activity, was conducted, and showed a different mode of cell death compared to cisplatin. The circular dichroism and electrophoretic mobility studies revealed that 1–4 hardly bind to DNA. 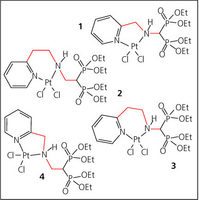 Semiconductor bond pads can be coated with Pd for good electrical properties and wire adhesion. The Pd is deposited by immersing the wafers in an electroless Pd plating solution. The remaining Pd in depleted spent plating solution can be recovered by electrochemical deposition onto a high surface area cathode. The recovery of the Pd improves the sustainability of the process.

Investigation on the Oxidation Behavior of Mo–Ru Hard Coatings

Mo-Ru coatings can be used as protective coatings on the top surface of glass moulding dies. The moulding atmosphere consists of steadily purged N2 and residual O2. The diffusion of O2 into Mo38.1Ru61.9 coatings annealed at 600°C in an O2-containing atmosphere was investigated. Solid solution strengthening and recrystallisation due to the introduction of O2 increased the surface hardness of the coatings from 13 GPa to 19 GPa after 4 h. An oxide scale and a Mo-depleted zone were formed after 8 h, due to the preferential oxidation of Mo and high volatility of MoO3. Cracks on the surface and in the Mo-depleted zone were observed after 20 h.