The paper by Professor William Griffith on early attempts to melt platinum (1) was fascinating. In 1774, an attempt was made to melt platinum using a 1.2 m diameter burning glass filled with alcohol to focus the sun's rays onto its surface, but the attempt proved unsuccessful. Platinum was finally melted in 1782 using an oxygen-hydrogen flame, and in 1856 a 600 g sample of platinum was melted using a coal gas-oxygen mixture (2). This remained the method for melting platinum until induction furnaces in the early twentieth century. By coincidence, 600 g is the maximum weight for most platinum jewellery casters today using induction coil heating around refractory crucibles followed by centrifugal or pressure differential casting of the melt up to about 2050°C. Platinum refiners and trade suppliers typically cast ingots of the order of 10–15 kg. Jewellery casters do not work at these levels for a mixture of interesting reasons.

Before reviewing current jewellery techniques it is useful to contrast the thermodynamic properties of platinum and its alloys with other jewellery metals (3). The data in Table I are presented using centimetre-gram-second (cgs) units as they fit the jewellery scale better than do SI units.

[i] aData taken from Reference (3) and further References therein

Casting temperatures for most platinum jewellery alloys (50–150°C over liquidus) range from 1800°C to 1950°C; yellow gold and silver alloys are cast below 1000°C. Typical palladium jewellery alloys are cast 200°C below the platinum range but radiation and conduction heat loss is still much greater than for gold and silver alloys.

Jewellery is designed on a volume basis, but the heat input required for casting is proportional to weight. Platinum and its alloys have high densities compared with most gold alloys and standard silver. As a result, for an equal volume, platinum alloys will have higher weight and absorb much more heat before casting, disregarding heat losses at the higher temperatures. For example, at 1900°C 100 g of molten platinum would make a sphere of volume 4.66 cm3 with diameter 2.08 cm, and would contain 8270 cal total heat. By comparison, 100 g of molten silver at 1100°C would occupy almost twice the volume at 9.52 cm3, with a diameter of 2.9 cm, and would contain 8780 cal total heat. For the same volume of molten platinum, a sphere of diameter 2.9 cm would now weigh just over 200 g, and its heat energy would be doubled at over 16,500 cal.

The thermodynamics of platinum were unknown in the 18th century, but they militated against melting by intense sunlight irradiation. A simple lens system concentrates a broad wavelength radiation spectrum but cannot focus all the useful wavelengths on the same spot. Unless it is blackened, platinum is a good reflector so a lot of energy does not get below the surface. As the temperature increases towards the melting point, more and more heat radiates away, and the latent heat required to achieve liquation is very high. Today, we can simulate sunlight melting by focusing a ‘single wavelength’ laser with great precision; the low thermal diffusivity of platinum concentrates the heat at the focal spot to achieve melting with a high degree of precision. This technique is now widely used for welding cast sections of platinum group metal (pgm) alloys for jewellery manufacture and repair.

Flame heating is also used for melting or welding at the jewellery bench. We have improved flame heat density, so that if we apply the highest heat density to an appropriate surface area to volume ratio of platinum particles and limit heat loss, we achieve reasonably efficient torch melting/welding.

Modern melting furnaces for casting pgm jewellery are compact, versatile and controllable. The upper limit for a charge of platinum is about 600 g but 250–400 g is more realistic for good economic and quality reasons. The furnaces occupy less than a cubic metre of space (see Figure 1 for an example used commercially) and are microprocessor controlled to ‘tune’ a 10–15 kW low/medium frequency induction generator to an induction coil surrounding a well filled refractory crucible. Melting a full charge wholly within the optimum coil geometry takes about 1 minute ending with strong stirring. Precise temperature/time control is essential when the time between melt out and automatic casting may be ten seconds or less. The microprocessor may call up a vacuum, provide an inert atmosphere, ‘pull the plug’ to top pour a mould or control the speed, acceleration and duration of spin in centrifugal casting. 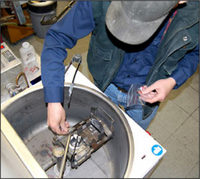 Excellent temperature measurement and control is essential. Casting temperatures for several standard platinum alloys are around 2000°C. The high latent heat of melting and low thermal diffusivity of typical crucible refractories may even allow the outer bulk of the crucible to retain a thin molten layer of refractory for short periods in contact with superheated metal but crucible life is short at such temperatures. Platinum alloys are oxidation resistant but tend to show a lower temperature at the surface than below until good stirring homogenises the melt and the surface clears. Radiation pyrometry of the surface is fast and manageable provided the pyrometer is calibrated. The perceived temperature is very dependent on the emissivity of the surface and the clarity of the atmosphere above the melt. Additional accuracy is provided by laser probes working at two different wavelengths; the ratio of the two radiation readings is used to calculate the temperature. Some prefer a thermocouple in contact with the base of the crucible and a microprocessor programmed to extrapolate the temperature to that of the melt.

The Economics of Casting

Economics determine the optimum size of the melting furnace. The average yield in casting platinum jewellery is around 50%; 200 g of cast rings also results in 200 g of circulating ‘scrap’ that may not all be remelted next day. That ‘scrap’ has the same bullion value as good rings and both carry melting, handling and capital costs too. It is not always convenient to assemble large size casting trees with uniform components, feeder system and section size. Mixed sections on a large tree can cause quality problems; smaller trees tend to give a lower yield. It is often better to cast similar components separately, part finish and assemble by soldering or welding. This approach will be discussed in a further article in this series.

The heat energies required to melt platinum alloys are higher than for comparable volumes of gold and silver alloys. The potential heat losses are also high but ‘internal’ thermal diffusivities are significantly lower. Early limitations on heat energy density have been overcome in modern techniques such as induction melting and high-precision laser welding. For platinum jewellery, the most common casting batch size range is 200–400 g for good economic reasons: to limit the amount of process ‘scrap’ returns and work in progress. Whether induction melting a few hundred grams or laser spot welding a hundred milligrams, heat transfer efficiency is high because the energy source is well matched to the target mass. 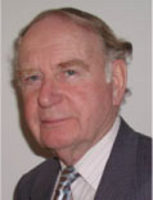 John Wright is a former Professor of Industrial Metallurgy at the University of Aston in Birmingham, UK. Currently, he is a consultant for the jewellery industry worldwide with Wilson-Wright Associates. He is also the author of the Johnson Matthey jewellery technical manual “An Introduction to Platinum”.