The technique known as ‘ossification’ has emerged as one of the most promising approaches for immobilisation of metal complexes, generating highly selective, stable and recyclable heterogeneous counterparts of homogeneous catalysts. ‘Ossification’ involves modifying the ligand(s) in a metal complex catalyst to achieve inherently insoluble forms of the metal complexes, without destroying the configuration responsible for their catalytic properties. The ossified catalysts have been demonstrated to show high catalytic activity and selectivity for a number of industrially important reaction classes such as palladium-catalysed carbonylation and Suzuki coupling and rhodium-catalysed hydroformylation. The characterisation of these catalysts has also shown that the key features of their homogeneous metal complex analogues are retained on immobilisation. The approach is very useful for the design and development of immobilised catalysts with specific features and functionality for various applications. It is also advantageous for catalyst–product separation. This article reviews the recent work on ossification involving platinum group metal complex catalysts in our research group.

Use of metal complexes as homogeneous catalysts in organic transformations has been the key to many important chemical processes in bulk commodities as well as in fine and speciality chemicals applications (1, 2). Growing environmental concerns and the necessity for economical use of the metals used in catalysis has led to a demand for the development of catalysts with improved catalyst–product separation for industrial use (3). Many new discoveries in homogeneous catalysis, including several in asymmetric catalysis, have not found practical application due to difficulties in the downstream processes associated with catalyst–product separation and the reusability of the catalysts. Hence, the immobilisation of homogeneous catalysts has received significant attention over the last few decades (4–6).

The most studied immobilised catalysts include supported organometallic complexes (using alumina, silica, zeolites and other porous materials as supports), water-soluble or fluorous biphasic, anchored or tethered, polymer-bound, supported liquid-phase, molecularly imprinted or dendrimer-supported catalysts (7). The use of solvent engineering using supercritical fluids (8) and gas-expanded liquids (9, 10) has also been studied in order to achieve facile separation of the catalysts from the reaction mixture. Most of the immobilisation techniques suffer from such drawbacks as the use of exotic and costly chemicals or materials, long duration and poor reproducibility of the preparation steps involved, and leaching of the metal under reaction conditions. Therefore, the search for an efficient yet simple method for immobilisation of metal complexes has been a continuing effort in many research groups.

In this article, we review the recent development of an immobilisation methodology known as ‘ossification’ (11), which is based on modifying the coordinating ligands in such a way that the final catalytic complex is inherently insoluble in most polar and non-polar solvents. The approach is analogous to the in vivo formation of bones in which complex calcium salts are deposited from simple soluble counter ions, hence the name ‘ossification’. Ossification can be described as a very generic technique to develop heterogenised homogeneous catalysts, and has also been demonstrated for several important classes of reactions. In this review, a brief description of the strategy of development and an overview of various applications will be presented.

Ossification of metal complex catalysts was inspired by the robustness of naturally-occurring biomaterials such as bones, coral reefs and shells. These materials are made by the slow deposition of insoluble biomaterials from simple soluble ionic constituents in an aqueous medium. Generically, all these biomaterials may be identified as salts of Group IIA cations with different functionalised anions, for example calcium or barium salts of organic carbonates, sulfonates or phosphonates. The highly insoluble nature of calcium sulfate or barium sulfate in water and other organic solvents was the starting point for the design and preparation of ossified metal complex catalysts. A metal complex with one or more sulfonate-functionalised ligands will generally be highly soluble in water, and subsequent formation of Ca or Ba salts of such a sulfonate-modified moiety will generate an intrinsically insoluble metal complex. This will ideally be a solid complex with the catalytically-active coordination centre intact, as illustrated in Figure 1. The ligand(s) with a barium–sulfonate ion pair denote the insoluble appendage.

Essentially, these metal complexes are synthesised by precipitation from an aqueous solution of their precursors, which is another noted advantage in the progress towards green and sustainable catalyst design and preparation as it avoids the use of costly and environmentally damaging organic solvents. Based on the same concept, other insoluble ion pairs may also be selected and several intrinsically insoluble complexes may be derived by the use of simple functionalised ligands. The functionalisation of ligands to obtain water soluble complexes retains the ligation properties of the donor atom (for example, the phosphorous in the triphenylphosphine ligand) as it is not directly targeted for functionalisation.

Chaudhari and Mahajan investigated several such ion pairs that might be used for the ossification of metal complexes (12). A variety of techniques for the efficient preparation of the ossified complex catalysts were reported:

These techniques were based on the formation and stabilisation of insoluble ion pairs from the aqueous medium, which can be influenced by parameters such as the relative concentration of the constituent ions and the temperature of the medium. The use of inert or neutral support matrices to obtain a uniform dispersion of the precipitates over a high surface area support was also studied. These techniques also addressed the issue of size control of the precipitates, as it is known that the overgrowth of precipitates does occur, resulting in the formation of bigger clusters. This actually blocks the active centres due to the low porosity of the clusters.

Following these studies, a detailed synthesis using the direct precipitation technique without any support matrix was reported, together with the characterisation of the ossified palladium complex catalysts and examples of their application for industrially important carbonylation and Suzuki coupling reactions (11). A range of different characterisation techniques, typically powder X-ray diffraction (XRD), cross polarisation-magic angle spinning nuclear magnetic resonance (CP-MAS NMR) and X-ray photoelectron spectroscopy (XPS), were employed to establish the effective immobilisation of the metal complexes.

In another report, the use of support matrices for the dispersion of ossified rhodium complex catalysts was illustrated along with their application in hydroformylation of terminal olefins (13). A direct precipitation method was developed to prepare the immobilised Rh catalyst by impregnating Ba2+ ions into an activated carbon support, followed by treatment of the resulting slurry with the aqueous soluble Rh complex catalyst containing triphenylphosphine trisulfonate (TPPTS) ligands. By this method, good dispersion of the ossified complex over the inert carbon support was achieved. A slight excess of TPPTS ligand, in the form of the Ba–TPPTS ion pair, was used to support and stabilise any Rh intermediate formed during the catalytic cycle, as the hydroformylation reaction is known to proceed via a phosphine dissociation mechanism.

The ossified platinum group metal complex catalysts have been used for a variety of different reactions as discussed in the following sections.

The first detailed application of the ossified catalysts for carbonylation of aryl olefins and alcohols was reported for the synthesis of 2-arylpropanoic acids with important anti-inflammatory properties (for example, ibuprofen and naproxen) (11) (Scheme I). Four different ossified Pd(II) complex catalysts, 1A–1D, were used in this study (see Figure 2).

Carbonylation of olefins and alcohols using palladium-based Catalyst 1A (11)

The results showed that the carbonylation reactions went to almost complete conversion with very high regioselectivity for the desired 2-arylpropanoic acid (>99% of the product mixture consisting of the branched isomer). Catalyst 1A outperformed the other catalysts in terms of turnover frequency (TOF). This variation in reactivity may be attributed to the difference in the stereoelectronic configuration of the Pd centre due to the different hemilabile chelating ligands used (11).

One important aim of the study was to achieve good stability and recyclability for the heterogenised catalysts, while retaining the high regioselectivity of their homogeneous analogues (14). To investigate this, carbonylation of different aryl olefin substrates to form arylpropanoic acids was carried out using the ossified Pd complex catalysts. The results are shown in Table I (15). Catalyst 1A was recycled four times with no significant loss of activity (less than 1% of its TOF). In order to determine the degree of leaching of the metal under reaction conditions the liquid product mixture after a certain conversion level (∼30%) was hot filtered and examined for its catalytic activity. This experiment revealed that the solution had no catalytic activity. Similarly, the Pd content in the filtrate as well as the used catalyst showed a negligible loss of Pd ((8.8 × 10−5)% of the Pd charged) during a reaction, as analysed by atomic absorption spectroscopy (AAS). Further, the catalysts were also characterised before and after the reactions using 31P CP-MAS NMR spectroscopy, which showed no changes in the peaks characteristic of the original catalyst composition (11). 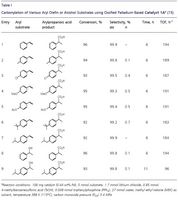 A wide variety of biaryl products were synthesised from arylboronic acid and organohalide substrates using Catalyst 1A. The results of some of the C–C coupling reactions are presented in Table II (15). However, to explore the optimum performance of the ossified Pd complexes, the reaction of iodobenzene with phenylboronic acid was also carried out using a higher substrate-to-catalyst ratio of 1.08 × 106, compared to 1.5 × 102 used in our other reactions presented in Table II. A significantly higher TOF of >343,000 h−1 was observed for this reaction in comparison to any such Suzuki coupling previously reported using a heterogeneous Pd catalyst (11). Catalyst 1A also underwent at least five recycles with no significant loss of catalytic activity (less than 1% of its TOF). 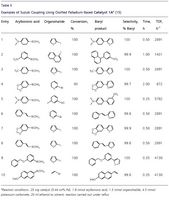 The leaching of Pd into the reaction medium was also determined to be negligible, with the loss of only ∼0.3 ppm of the Pd initially charged from the catalyst in each run, confirming the unique stability of these ossified catalysts. In addition, the catalysts perform well under both acidic and basic conditions, for carbonylation and Suzuki coupling reactions, respectively, in contrast to the highly pH-sensitive parent Pd complex in the homogeneous phase. 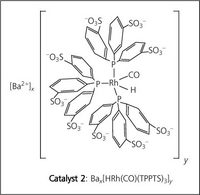 ‘Ossification’ provides a novel method of immobilisation for metal complex catalysts. The principle and effectiveness of the approach have been demonstrated by several examples, including palladium-catalysed carbonylation and Suzuki coupling and rhodium-catalysed hydroformylation reactions. It is shown through characterisation of these catalysts and by leaching and recyclability studies that this technique gives very robust and stable immobilised catalysts which retain the important features and selectivity of their homogeneous counterparts. The applications of carbonylation and hydroformylation also illustrate their potential usefulness for industrially relevant reactions. However, there is still a need for more detailed investigation of the kinetics and mechanisms of the reactions and further comparison with homogeneous catalysts.

Professor Raghunath V. Chaudhari is the Deane E. Ackers Distinguished Professor at the Department of Chemical and Petroleum Engineering, University of Kansas, Lawrence, USA. His research experience covers interdisciplinary fields of catalysis, chemical reaction engineering and modelling of multiphase reactors. His current research is focused on fundamentals of catalysis and reaction engineering for conversion of biomass to fuels and chemicals, and the design and development of novel catalytic materials.

Dr Bibhas R. Sarkar is currently working as a postdoctoral researcher at the Centre for Environmentally Beneficial Catalysis, University of Kansas, Lawrence, USA. He obtained his PhD from the National Chemical Laboratory, University of Pune, India in 2007. His major area of research is the design and development of catalytic materials and applications to industrially relevant chemical reactions, with special emphasis on the immobilisation of metal complex catalysts.