Catalyst Preparation for the 21st Century

Catalyst Preparation for the 21st Century

Catalysis accounts for around three billion dollars per annum in the US chemical industry alone (1), and it can be estimated that each US dollar spent on catalysis creates around 155 dollars’ worth of products (see box below) (1–3). All these catalysts have to be prepared, and the majority of large-volume chemical processes utilise heterogeneous catalysts. Catalysts are synthesised by a variety of means, and over the last century there has been a consistent trend towards smarter preparation methods leading to higher-quality catalysts. In the light of this is it is perhaps prudent to consider how these catalytic materials are made and how they will be made in the future. With this in mind, the one-day symposium, Catalyst Preparation for the 21st Century, was jointly organised by the Applied Catalysis Group of the Royal Society of Chemistry (RSC) and the Catalysis Subject Group of the Institution of Chemical Engineers (IChemE) and took place on 18th March 2010 at Burlington House in London, UK, home of the RSC (4).

The event was a great success and there was a good atmosphere as the audience listened to seven excellent talks from leading academic and industrial researchers. These varied in content from methods of catalyst manufacture, to understanding the current place of catalysis in the world's economy, to the challenges that must be faced by the scientific community over the next twenty years to allow us to maintain our current lifestyle.

A series of insightful talks demonstrated how catalysts and materials can be synthesised in a controlled and predictable fashion to achieve higher activities and selectivities, and why heterogeneous catalyst synthesis should no longer be considered a ‘black art’. These talks covered a range of applications, organic reactions and synthetic methods: from fuel cells (energy production) to Fischer-Tropsch synthesis and the selective hydrogenation of unsaturated multifunctional molecules. The catalyst synthesis methodologies discussed ranged from impregnation, alloying and laser sputtering, to direct reduction and precipitation of stabilised colloids onto surfaces – the latter having been considered an academic curiosity until quite recently. A selection of the talks most relevant to the platinum group metals are discussed below in more detail.


Investment in Catalysis in the Chemical Industry

North America was the largest single region in terms of catalyst use in 2005, with 34% of global demand, and the US accounted for 90% of this (1). The US chemical industry shipped US$611 billion worth of products in 2005 (2). It has been estimated that 80% of chemical processes involve catalysis at some point (3), which means that US$489 billion worth of shipments were derived from catalysed chemical processes in the US in 2005. North American demand for catalysts in 2005 amounted to US$3.5 billion, of which 90% was within the US (1), leading to a total expenditure of US$3.15 billion on catalysts in the US in 2005. Therefore it can be calculated that each US$1 spent on catalysts generated US$155 worth of products shipped by the US chemical industry in 2005.

Krijn de Jong (Utrecht University, The Netherlands) gave the Plenary Lecture in which he demonstrated how images of catalysts created using three-dimensional transmission electron microscopy (TEM) tomography can be used to reveal structural information including pore structure and connectivity. TEM only samples around 10–13 g of material at a time. However, in combination with porosity information from bulk techniques such as mercury intrusion porosimetry or X-ray diffraction (XRD) it proves to be a very powerful tool (5, 6). De Jong showed that careful control and a proper understanding of the catalyst synthesis could lead to materials with significantly enhanced activity.

• stability in the highly acidic oxidising environment found within a fuel cell;

• the ability to form porous layers to allow transportation of fuel (hydrogen) in and water out;

• high activity at low temperature; and

Of all the commercial materials available, only Pt and Pt-transition metal alloys supported on carbon are currently able to meet these requirements. Increasing the Pt loading increases the activity. However, doubling the Pt metal content does not double the activity, as particle size increases with Pt loading leading to a decrease in the electrochemically active surface area per unit mass of Pt (Figure 1). This suboptimal response to increased loading creates challenges for catalyst synthesis.

The use of alloying metals such as ruthenium can create a greater tolerance of impurities such as carbon monoxide, while addition of base metals such as cobalt, titanium, nickel or iron allows the amount of platinum present to be reduced without losing activity, and consequently lowers the cost of the unit.

One interesting approach to catalyst synthesis described by Thompsett was a ‘carbothermal’ method in which the carbon support acts as a reductant for the catalytic metals. In the case of platinum-titanium bimetallic nanoparticles, it was shown that the Pt is reduced first, followed by the Ti. The temperature of the Ti reduction was lower than anticipated and this is believed to be due to the Pt in the sample catalysing the process.

Frank Daly (Oxford Catalysts Group PLC, UK/Velocrys, Inc, USA) described the Fischer-Tropsch catalyst produced by Oxford Catalysts and used by Velocrys in their microchannel reactor. The catalyst used is Ru-promoted Co/SiO2 with loadings of 0.27% Ru and 50% Co. The support has an unusually large particle size of 250 μm, and is surface-modified to prevent formation of significant amounts of cobalt silicate. Performance data were presented in terms of residence time for a syngas mixture of 2:1 H2:CO with selectivities for CH4 of 8.7–10% and C5+ of 84–85% at CO conversions of 50–70% depending on the gas flow used.

Shik Chi (Edman) Tsang (Oxford University, UK) described how Pt nanoparticles between 4 nm and 14.4 nm in size could be synthesised by using stabilisers to prevent aggregation. Particles within this size range had differing numbers of edge and face sites present. Further refinements could be made by capping specific (corner) sites of the Pt nanoparticles with cobalt (Figure 2) (7) to probe where reactions take place on solid surfaces; this was demonstrated by using the Co-capped Pt nanocatalyst for the reduction of α,β-unsaturated aldehydes to the corresponding alcohols, which resulted in a selectivity of almost 100% (8).

Cobalt atoms (blue) are applied to ‘cap’ corner sites of a platinum nanocrystal (red) to create an ultraselective nanocatalyst for the hydrogenation of α,β-unsaturated aldehydes to corresponding alcohols (7) (Image courtesy of Edman Tsang, University of Oxford, UK) 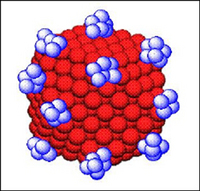 Peter Witte (Process Catalysis Research, BASF, The Netherlands) demonstrated how Pt, Pd and mixed Pd-Pt catalysts on titanium silicate can be synthesised by an intriguing route. The metal particles were created by reduction using hexadecyl(2-hydroxyethyl)dimethylammonium dihydrogen phosphate, 1, which also acted as a stabilising agent. During the reduction process the hydroxyl group of the quaternary ammonium salt 1 becomes oxidised to an aldehyde (9). These particles can then be deposited onto a support such as titanium silicate and, with the stabiliser still present, used to catalyse reactions such as the selective reduction of alkynes to dienes with high cis-trans selectivity. During repeated reduction cycles the stabiliser is slowly lost to the solution.

In support of these presentations was a series of twenty-five high quality posters. Once again these covered a range of topics related to catalyst synthesis. Prizes were awarded for the best student and postdoctoral posters. The winners included Jonathan Blaine (University of Southampton, UK), who presented a poster on heterogeneous, single-site multimetallic nanoparticle catalysts from molecular precursors, and Francisco Rafael Garcia Garcia (Imperial College London, UK), with a poster on a novel inorganic hollow fibre microreactor for H2 production by the water-gas shift reaction.

Significant improvements in catalysis have been made over the last fifty years. Despite this, innovation continues to occur as new applications are developed and more stringent demands are placed on catalysts, including environmental legislation for emissions abatement. With each new demand those who prepare catalysts have risen to the challenge and improved the properties of their materials. This steady advance in properties is still seen in some of the oldest catalytic materials such as platinum, which has been in use since the early 1800s. Improvements continue to be made and will be for some time to come. 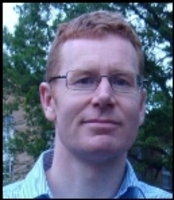 Simon Crabtree is the Manufacturing Science Research Manager at Johnson Matthey Catalysts' Billingham site in North East England. He obtained his degree and PhD from the University of Durham, UK. During his PhD he was supervised by Dr Mel Kilner and worked on homogeneous rhodium catalysis. He graduated in 1996 and joined Davy Process Technology as part of their petrochemical process development group, working across their portfolio of products including syngas products (methanol), (de)hydrogenations and carbonylations. Davy Process Technology was acquired by Johnson Matthey in 2006. 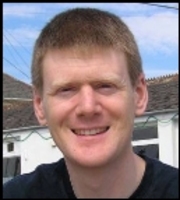 Peter Ellis is a Principal Scientist at Johnson Matthey Technology Centre, Sonning Common, UK. He obtained his degree and PhD from the University of Durham, where he was supervised by Dr Mel Kilner and worked on homogeneous and heterogeneous catalysis projects. He worked at a postdoctoral researcher with Professor Robbie Burch at Reading University, UK, and Queen's University Belfast, UK, on the direct synthesis of hydrogen peroxide from hydrogen and oxygen. He joined Johnson Matthey in 2002 and has worked on the synthesis of nanoparticles, catalysts for the Fischer-Tropsch reaction and gold-copper alloy catalysts.