An overview of publishing trends in the pgm scientific literature

Analysis of the non-patent scientific literature can be used to reveal trends in platinum group metals (pgms) research. In this article, a study was carried out using the Chemical Abstracts database on key terms related to the pgms for the years 1998 and 2008, revealing an increase in research during this time period across most of the pgms both globally and especially in China. Platinum and ruthenium showed the most growth with areas such as nanotechnology and magnetic memory becoming particularly significant for ruthenium. In China, the fields of electrochemistry, and energy conversion technologies including fuel cells, were among those showing growth.

This article follows on from a previous article in this Journal, which detailed how the technique of patent mapping can be used to gain an understanding of patenting trends and identify emerging technologies from the study of intellectual property (1). Non-patent literature is more abundant and is also a rich source of information – allowing not only detailed studies on topics of interest, but also analysis of global research trends in a particular field. In general it may also indicate areas of research that are further from commercial application than those appearing in the patent literature. This article demonstrates how analysis of the published literature can reveal trends in pgm research including, for example, which of the pgms are the focus of most research interest, in which parts of the world, and how this is changing over time. More detailed examination can then reveal upcoming technology areas and their possible application.

The Chemical Abstracts database from the Chemical Abstracts Service (CAS) (2) provides abstracts from an extremely wide-ranging selection of scientific publications, including journals, conference proceedings, books, dissertations and other types of publication, and so lends lend itself well to this type of study. It provides access to publications from a wide geographical area whose abstracts have been translated into English. In addition, one of its outstanding benefits is the quality of indexing attached to each abstract. During the indexing process key substances used in the research, and controlled terms relating to the research, are assigned to each publication. Therefore, a paper in which platinum is a key substance will have the CAS registry number of platinum as an indexed, and hence searchable, feature. Accessing the Chemical Abstracts database through the STN® online service also enables large amounts of data to be sorted to allow meaningful analysis.

Searches were carried out of non-patent literature published during 1998 and 2008, using the CAS registry number for each pgm. The results were compared in order to yield an understanding of the relative interest in each metal and the waxing or waning of that interest over time. 2003 figures were also determined in order to confirm the trends seen.

Writing this paper required the analysis of publications from all over the world and additionally the use of indexing terms that are added manually by the CAS. Although the main publishers supply details quickly to CAS, it may take some time for publications from certain countries to be forwarded and also translated and indexed. So, in order to avoid some countries being prejudiced in the analysis, 2008 was considered to provide the most recent, and virtually complete, data set at the time of writing. Nevertheless, a small number of 2008 publications from some countries are still being uploaded at the time of this article going to press.

Table I shows that published pgm research increased by 73% over the ten-year timeframe of the study. Publications concerning platinum were the largest contributor to this growth, while papers relating to ruthenium and to some extent palladium also saw a large increase in number. However, the same cannot be said for rhodium and osmium. The reasons for this are not clear, but a possible contributory factor for rhodium may be its volatile price in recent years (3).

[i] a The total number of papers is less than the arithmetic sum of the number of references for each pgm. This is a result of index terms for more than one metal being used in a single paper

During the Chemical Abstracts indexing process, as well as being assigned CAS registry numbers for substances used, each record is allocated to one of 80 Section Codes to identify its general topic and, in a further division, sub-topic. For a specific data set, we can generate a list of these classification codes and the numbers of papers to which each was assigned. Analysis of the most commonly assigned Section Codes indicates the most popular areas for research. Table II details the most common areas of study for papers published in 2008 where ruthenium was a key material. It can be seen that both magnetic phenomena and energy conversion devices ranked highly.

Further insight into the details of these topics can be gleaned by examination of the top 10 controlled terms (a set of terms from a defined lexicon) that have been applied to these publications. For example, the most commonly used controlled index terms for the ruthenium papers in 2008 included nanotechnology, fuel cells and magnetic tunnel junctions for magnetoresistive random access memory (MRAM) – none of which featured in the 1998 top research topics. In comparison, catalysts both for oxidation and hydrogenation were popular topics of research both in 2008 and 1998.

Another useful indexing feature within Chemical Abstracts is the ability to search each document to find the country in which the primary researcher is located. Hence an analysis of the countries most involved in research using pgms can be carried out. The results are produced in the form of a list of publishing countries ranked by the number of publications from each country. Analysis of the collated results by continent is shown in Figure 1. 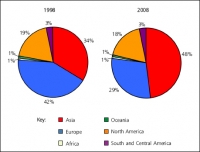 It is apparent that over the ten years studied there was a 13% drop in the proportion of research papers emanating from Europe, with a commensurate increase in the relative proportion of research coming from Asian countries. Further analysis indicates which countries within each region are responsible for the changes. The top ten publishing countries and how their positions altered over the ten years are shown in Table III.

The most notable change is the rise of China to the top of the league table resulting from a 3.7 fold increase in the number of publications over this timeframe. This pushed the USA and Japan into second and third place despite a large increase in their research output. Other Asian countries such as South Korea and Taiwan also moved up the rankings. European countries such as Germany, France and the UK saw growth in the numbers of publications although little change to their ranked positions. The apparent decline in the number of publications for Russia in 2008 vs. 1998 is most likely to be an artefact of the delay in publishers forwarding their information to CAS. Therefore it is not possible to draw any conclusions from this data at the time of writing

Growth of Research in China

The data in Table III show that published pgm-related research grew by a substantial amount in China over the ten years from 1998 to 2008. While this is an impressive growth trend, it should be noted that publications from China in every technology area also increased, sometimes at an even higher rate than that reported here for the pgms.

By looking more closely at the CAS registry numbers for the pgm papers we can determine whether research in China showed the same trends as the rest of the world for each metal. Table IV shows that research activity in China for all the pgms increased very significantly during this time, with platinum, palladium and ruthenium showing the highest growth. A comparison of Table I (data for the whole world) and Table IV (China only) shows that growth was consistently higher in China than the rest of the world for each pgm.

[i] a The total number of papers is less than the arithmetic sum of the number of references for each pgm. This is a result of index terms for more than one metal being used in a single paper

Table V details the top ten Chemical Abstracts Section and Sub-Section Codes for the Chinese pgm literature published in 2008, showing that the most popular research area concerned energy conversion devices such as fuel cells. A comparison of the top ten Section Codes in 2008 with those from 1998 shows that some subjects such as electrochemistry and inorganic analytical chemistry have remained popular. Other subjects, such as energy conversion devices have moved significantly upwards within the top 10 ranking, and subjects including radiation chemistry, photochemistry, ferroelectricity and semiconductors have now appeared in the top 10 whereas they were of considerably less interest in 1998.

This short paper has shown how the Chemical Abstracts database can be used to obtain meaningful analysis of trends in both the use of individual pgms and the geographical distribution of the research. It has been shown that the ten years between 1998 and 2008 saw overall growth in research involving platinum, ruthenium and to a lesser extent palladium and iridium, while research using rhodium and osmium remained flat or even declined slightly. Analysis has also indicated that there was a change in the relative geographical distribution of research, with a large rise in the number of publications from China pushing the USA, Japan and European countries down in the rankings despite growth in all of these regions. Research activity in China for all the pgms increased very significantly with platinum, palladium and ruthenium exhibiting the highest growth.

The paper has also illustrated how some of the indexing features of the Chemical Abstracts Service are used at Johnson Matthey to provide an overview of research trends in a subject area, or to provide an analysis of research over a wide or more specific geographical area. This type of analysis can also be carried out on patent data sets and so complement the mapping technique. However, examination of non-patent literature provides information on technology areas that are generally further from commercial exploitation and may allow emerging markets to be identified at an earlier stage. 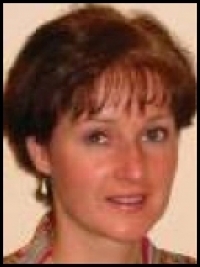 Helen Gavin is an Information Scientist working in the Technology Forecasting and Information department at Johnson Matthey Technology Centre, Sonning Common, UK. She is particularly interested in the use of publicly available information for competitive advantage.