A catalyst for hydrogenation and dehydrogenation reactions containing Ru and Ni in a molar ratio of (0.15 × 10−3)–0.06:1 exhibits superior resistance to deactivation by acidic components in a feedstream compared to standard Ni-only catalysts. A preferred composition is 10−40 wt% Ni and 0.05−0.25 wt% Ru, with the remainder a porous transition alumina support. It can specifically be applied to the hydrogenation of carbonyl compounds such as butan-2-one and n-butyraldehyde in a feedstream containing acidic compounds such as ≤1 wt% of a carboxylic acid.

A dynamic thermodynamic resolution process for therapeutically active chiral amines such as sertraline consists of: (a) racemising a mixture of amine isomers in solution using an Ir catalyst 1; (b) adding a chiral resolving agent such as mandelic acid to allow selective crystallisation and removal of the desired isomer; and (c) returning the unwanted isomers to step (a). The catalyst may be recovered and recycled through reaction of NH3(g) with 1 to form a solid complex. 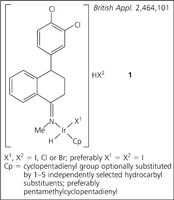 Formic acid can be produced from CO2 and H2 at ≤80°C using a Rh catalyst containing a nitrosyl ligand, a bidentate organophosphorus ligand, preferably 1,2-bis(dicyclohexylphosphino)ethane (dcpe), and a halogen, preferably Cl. The catalyst is preferably [Rh(NO)(dcpe)]Cl2 and TON is typically >100. The process is carried out in the presence of an organonitrogen base, specifically 1,8-diazabicyclo[5,4,0]undec-7-ene (DBU), which may also act as solvent, or an additional solvent such as toluene or acetone can be used.

A NOx treatment system suitable for low- to mid-temperature operation has a first layer with: 0.1–20 g l−1 Pt and optionally Rh; 1–100 g l−1 La and/or oxides of La, which impart increased resistance to S poisoning; Ce and/or oxides of Ce; and optionally a heat-resistant inorganic oxide. A second component containing a solid acid is either formed as a second layer or mixed with the first. During rich conditions, stored NOx is reduced by CO, HC or H2, producing N2, NH3 and H2O. The second layer then adsorbs the NH3, releasing it as a NOx reductant under lean conditions.

Platinum-Palladium Catalyst for H2-SCR of NOx

A catalyst has 0.01–2.0 wt% of each of Pt and Pd, preferably 0.1 wt% Pt and 0.05 wt% Pd, on a nanocrystalline support of 50 wt% MgO and 50 wt% CeO2. It is formed by wet impregnation from suitable precursors to give highly-dispersed Pt and Pd particles <2 nm in size, and may also have Pt-Pd alloy and oxides of Pt and Pd formed during preparation, calcination or reaction. The catalyst is described to have high activity (>70% conversion of NO) and >80% selectivity to N2 in the SCR of NOx using H2 as reducing agent, at low temperatures (100–400°C) and in the presence of 2–10 vol% O2, making it ideal for stationary industrial applications.

Pt-Co nanoparticles for cathode catalysts are prepared by heating a mixture of: (a) a Pt precursor such as Pt(acac)2; (b) a Co precursor such as Co2(CO)8; (c) a capping component, preferably oleic acid and/or oleylamine; and optionally (d) a reducing agent such as 1,2-hexadecanediol. Particle size is controlled by varying the concentration of (c) relative to the total concentration of (a) + (b). Particles ∼1–5 nm in diameter are formed in the presence of solvent and particles ∼6–12 nm in size are formed in its absence.

A 0.1–10 μm-thick Pd membrane and its use in a selectively permeable membrane reactor for H2 production is claimed. Membrane composition is 40–90 wt% Pd with added metals A and B, independently selected from: Rh, Ir, Ag, Au, Co, Ni, Cu such that: A and B each form a complete solid solution with Pd, the A-B phase diagram has a triple point, and A and B do not form an intermetallic compound.

A mass spectrometry method for reliably measuring the ratio of 13C to 12C, indicative of natural or synthetic origin of a compound present in a urine sample for example, involves first hydropyrolysis at <350°C in the presence of a catalyst selected from Pt, Pd, Rh or Ir, preferably Pt. The catalyst may be metallic or deposited at 1–20 wt% on a support which also adsorbs the products of hydropyrolysis. These products are fully deconjugated and can be purified by gas chromatography without the need for further derivatisation.

A process for preparing a novel, high-melting glass composition is claimed, using a melting vessel of solid Ir or Ir alloy (preferably ≥95 wt% Ir) and heating by high-frequency electromagnetic radiation (50 kHz to 2 MHz) to achieve melting temperatures of ≥1500°C (preferably ≥1600°C). The glass, which can be used in dental restorations, contains 0.1–25 mol% Yb2O3, rendering it X-ray opaque and therefore suitable for use with imaging techniques.

A BaIrO3 conductive powder suitable for use in a resistive paste with Pb-free glass frit and an organic medium or vehicle is prepared by: (a) calcining a precursor such as (NH4)2IrCl6 to yield IrO2; (b) calcining the IrO2 powder with BaCO3, BaNO3 and/or BaO powder at 650–1000°C in air to produce BaIrO3; (c) grinding the BaIrO3 to give particles with 20–100 nm mean diameter; and (d) calcining again at 400–650°C in air to adjust mean diameter to 40–100 nm for ideal, low-noise resistivity characteristics.

An anode for a rechargeable Li-ion battery is formed by vertically orientating the (003) plane of a LiCoO2 single crystal on the (110) plane of a single crystal metal substrate, either Pt or Au. The lattice spacing of the substrate is close enough to that of the LiCoO2 to allow the film to be grown epitaxially by pulsed laser deposition. This formulation is described as faciliating migration of Li+ ions within the anode, potentially allowing easier recharging and higher power output.

A pharmaceutical composition has a Pt(IV) anticancer compound, 1, mixed with protective excipients such as saccharides or peptides and optionally a lubricant or disintegrant, contained in a tablet or capsule for oral administration. The capsule is coated with a biodegradable layer and/or a pH-sensitive layer formulated to dissolve in the colon, allowing effective delivery of 1 to the site of colorectal carcinoma in doses of 5–500 mg, preferably 50–350 mg. 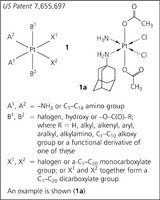 Square planar complexes M(N^N)2, where M is Pt, Pd or Ni and N^N is a bidentate anionic ligand, preferably a triazolate, are claimed for use in the emissive layers of OLEDs, particularly white OLEDs (WOLEDs), and as the n-type material in organic thin film transistors used in complementary metal-oxide-semiconductor (CMOS) devices. A preferred complex, 1, has excellent colour stability even at high luminance and superior photoluminescent properties, allowing improved efficiency in these devices. 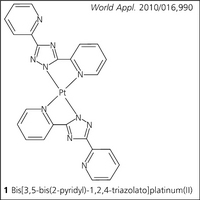 A phosphor is produced by firing a Group 12–Group 16 compound semiconductor such as ZnS, ZnSe, CdS or CdSe with an Ir compound such as IrCl3, (NH4)2IrCl6 or (NH4)2IrBr6, and optionally S and a flux. Firing is preferably accomplished using a ≥0.1 GPa shock wave to rapidly heat the mixture to reaction temperature, with subsequent rapid cooling, to allow Ir to disperse uniformly in the phosphor for optimal efficiency. Ir content is preferably 10–8,000 ppm, with the amounts of Ir contained within the phosphor and on the surface not varying by more than 5% relative to each other.

Reuse of Ruthenium from Manufacturing Waste

Recovery and purification of RuO4, used as a precursor in the manufacture of semiconductor devices, is accomplished by: (a) heating the gaseous waste stream in a vessel at 50–800°C and 0.01–1000 torr, optionally in the presence of a Ru or RuO2 catalyst, to convert the RuO4 to a lower oxide in solid form; (b) reducing this with H2 to Ru metal with a specific surface area of >1.0 m2 g−1, preferably ∼7.0 m2 g−1; (c) oxidising the metallic Ru using at least one of NO, NO2, O2, O3 or plasmas thereof to give RuO4; and (d) purifying this secondary stream to ≥99.9% RuO4 through distillation for reuse.