FINAL ANALYSIS: The Use of Metal Scavengers for Recovery of Precious, Base and Heavy Metals from Waste Streams

FINAL ANALYSIS: The Use of Metal Scavengers for Recovery of Precious, Base and Heavy Metals from Waste Streams

A recent Final Analysis article discussed the use of Smopex® metal scavengers for the removal of residual palladium from synthesised products in the fine chemical and pharmaceutical industries (1). However, the use of Smopex® is not limited to scavenging precious metals to purify final products; it can also be used to clean up base and heavy metals from waste streams, particularly in areas where legislation dictates limits on the metal content of effluent.

Smopex® (Figure 1) is a fibrous metal scavenger which can selectively recover metal dissolved in solution, down to extremely low levels (parts per billion) (Figure 2). The fibres can be used mid-process or in a final step to recover metals from process waste streams prior to discharge to effluent. The fibres can be used at temperatures up to 120°C, where metal recovery is often more effective, and are non-hazardous. 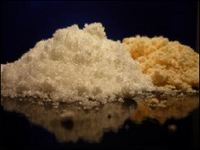 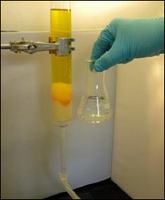 The waste stream from an industrial process is often forgotten in the focus on optimising the process itself. In many cases the bulk of a spent platinum group metal (pgm) heterogeneous catalyst material can simply be filtered off and sent for refining to recover the pgm. However, there may also be small amounts of pgm which remain in solution at levels which are not economic to refine, and are thus lost to effluent. Such losses can accumulate over time, to the point where kilogram amounts of pgm may be unaccounted for.

All metal used in industry has a value, and this is particularly true of precious metals including the pgms. The value of pgm lost over time can be considerable, and further costs are incurred when the metal catalyst or salt must be ‘topped up’ to replace the losses in order to maintain the efficiency of the process.

Once it has been established that metal needs to be recovered from the effluent, there are a number of options, usually involving processing off-site. For example pgms can be recovered by reduction using reagents such as sodium borohydride or hydrazine, although hydrazine is becoming less acceptable for use in industry due to its hazardous properties and handling issues.

The cost of transporting large volumes of waste solution containing small amounts of pgm can negate the benefit that can be achieved from refining it. In some cases there may be hazards associated with transport of certain substances contained within the mixture. Therefore it is desirable to concentrate the pgms to a level at which recovery via standard refining becomes possible. This can be achieved using Smopex® fibres, as they can selectively recover the pgms into a form that is suitable for use with standard refining processes.

In this way worthwhile quantities of pgms which would otherwise be lost to effluent can be recovered, as the following example illustrates.

A large-volume corrosive waste stream containing <10 ppm total pgms was being generated from a metal refining process. The waste stream had a hydrochloric acid (HCl) matrix with a pH of 1, and the metal content predominately consisted of base metals (iron, nickel and zinc) plus silver, with a combined total of <10 parts per million (ppm) of platinum, palladium, rhodium, iridium and ruthenium. Due to the high-throughput nature of the process, Smopex® was installed as part of the continuous process flow rather than separately in a batch reactor, to allow for the high flow-rate while still maintaining sufficient contact time with the fibre for metal recovery to occur. Laboratory test results are shown in Figure 3.

Laboratory test results showing the rates of recovery of various platinum group metals and silver from a mixed metal effluent stream based on an aqueous hydrochloric acid solution, using Smopex®-105 at 20°C 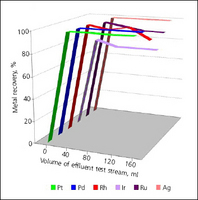 Due to the nature of the process, there was continual variation in the metals that were present and their concentration in the effluent stream. In order to facilitate recovery, a Smopex® fibre mixture was specifically developed to allow for the inconsistent nature of the stream. Smopex® has successfully recovered more than £1.5 million (US$2.2 million) worth of pgms from this process in the last two years. This metal could not have been economically recovered in the past and would potentially have been lost to effluent.

Where base or heavy metals such as arsenic, lead or manganese are involved, the driver behind metal recovery is environmental (2–4). Increasingly strict limits are being imposed by legislation in regions such as the USA (2) and Europe (3) regarding the levels of metal that can be present in effluent that is discharged into the environment. This means that very dilute aqueous streams may have to be tankered away for disposal, which is both costly and potentially hazardous. In addition, the method of disposal of this ‘contaminated’ material is still an issue.

In such cases, Smopex® fibres can be used at the end of the process to remove the base or heavy metals, producing a cleaned up effluent that can potentially be released directly from the site. This approach has advantages in reducing the volume of waste material which must be transported, as well as allowing the heat generated by the process itself to aid recovery on site. If necessary, more than one metal species can be recovered by tailoring the Smopex® fibre mix accordingly.

Metals can also be selectively recovered from waste which would be hazardous to transport to a refining site, and this is particularly useful where precious metals are present, as illustrated in the example below.

As the result of an oxo-alcohol manufacturing process, a harmful organic sidestream was being produced that was hazardous for transport, but contained significant amounts of pgm (<500 ppm rhodium). After screening, the most selective Smopex® fibres were chosen. These showed great affinity for the rhodium complex to be recovered at an elevated temperature (∼90°C), and were particularly suited to the organic nature of the material. Achieving pgm recovery on site meant that the remaining hazardous material was easily treated in situ, reducing the need for handling or transport. The Smopex® treatment resulted in a recovery of 99% of the residual rhodium present in the waste stream.

Effluent which contains low concentrations of metals presents a problem in terms of both metal cost, particularly in the case of pgms, and the environment, in the case of base or heavy metals. One way to solve both types of problem is by using metal scavengers such as Smopex®, which can be applied on site as part of a batch or continuous process to recover pgms for refining or to remove base and heavy metals, leaving a cleaned up effluent suitable for direct discharge or further treatment as required.

Joanne Frankham is Global Marketing Executive for the Smopex® and PGM Refining businesses within Johnson Matthey, and is currently based in Royston, UK. She has worked in the pgm industry for approaching ten years.