Latest research on platinum casting attracts interest from the industry

Attendance at the 24th annual Santa Fe Symposium® was up to near-record levels this year with about 140 attendees, indicating a more optimistic outlook by the jewellery industry and in stark contrast to 2009. Held in Albuquerque, New Mexico, USA, from 16th–19th May 2010 (1), the Symposium had a strong programme of presentations covering a wide range of topics. Platinum featured strongly and attracted much interest. A new feature this year was that major sponsors were given the opportunity to give a short presentation and to have a display table in the lobby area. Thus, there was a strong presence by leading companies and organisations within the jewellery industry including JCK, Johnson Matthey New York, MJSA and Platinum Guild International.

One of the highlights of the Symposium was the presentation by Ulrich Klotz (FEM, Germany) on a major research project carried out, with several industrial partners, on the investment casting of platinum alloys. Funded by Platinum Guild International, this is perhaps the first significant basic research carried out on the platinum casting process for some years and should lead to improved casting technology. In his presentation, entitled ‘The Role of Process Parameters in Platinum Casting’, Klotz looked at the casting of two platinum alloys: 950 PtRu (platinum with 5 wt% ruthenium) and 950 PtCo (platinum with 5 wt% cobalt). Segregation effects, especially of silicon, lead to a substantial extension of the melting range by lowering the solidus temperature.

This work has shown that casting of platinum alloys is a complex process and that careful selection of casting conditions is important if acceptable castings are to result.

Understanding the microstructure of platinum jewellery alloys and how it is influenced during processing is important if good quality jewellery is to be produced. This involves a process of metallography, in which specimens are polished and etched and examined under a microscope. Paolo Battaini (8853 SpA, Italy) made a significant contribution to our understanding in his presentation ‘Metallography of Platinum and Platinum Alloys’. In this presentation, Battaini described how to best prepare specimens for optical examination, with some emphasis on etching techniques to show up the microstructural features. Electrolytic etching was preferred over chemical etching. He examined a range of platinum alloys, including dental and other alloys as well as the standard jewellery alloys, with compositions ranging from 70%–95% platinum with rhodium, iridium, gold, copper, cobalt, copper-cobalt or indium-gallium-zirconium, in various metallurgical conditions. Some excellent metallographs illustrated how alloy microstructure varied between the platinum alloys (some are two-phase) and with metallurgical conditions (an example is shown in Figure 1).

Metallographs of a biphasic platinum-copper-cobalt alloy characterised by small grain size. Here, ‘phase’ stands for a portion of the alloy whose properties and composition are homogeneous and which is physically distinct from other parts of the alloy: (a) the 95% Pt-4% Cu-1% Co sample, flask temperature 650°C, hardness 169 ± 10 HV200; (b) detail showing a secondary phase along the dendritic arms; (c) detail of (b) at higher magnification (Courtesy of Paolo Battaini, 8853 SpA, Italy)

Another highlight of the Symposium was a presentation by Edoardo Bemporad (Roma Tre University, Italy), who spoke about new techniques, ‘Focused Ion Beam and Nano-Mechanical Tests for High Resolution Surface Characterization: Not So Very Far Away from Jewelry Manufacturing’. FIB testing uses a fine beam of ions to selectively remove material and thus mill a shape on the nanoscale (Figure 2). When coupled with an electron beam (‘dualbeam’ technology), the technique allows the observation of the nano-milling process in real time. This technique can also be used to prepare thin samples for transmission electron microscopy (TEM) examination of microstructure (Figure 3). Nano-indentation is a technique for measuring hardness in a dynamic way and its use can allow the determination of the elastic modulus. Bemporad used examples of platinum-copper and platinum-rhodium alloys to illustrate what these techniques can achieve. Using FIB to produce TEM samples, he determined the effect of metallurgical condition on the order/disorder transition in 95% Pt-5% Cu and showed for Pt alloyed with 10 wt% Rh that processing history affects the microstructure, in particular the precipitates formed, and thus the hardness values measured. This information could not be determined by conventional metallographic techniques.

Example of cross-sectioning by the focused ion beam (FIB) technique. A thin layer of platinum is deposited on the surface of the specimen before ion milling (Courtesy of Edoardo Bemporad, Roma Tre University, Italy) 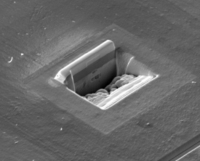 Production of jewellery from sustainable materials, ethically produced, has become of increasing importance to the consumer. However, as Mark Danks (Johnson Matthey New York, USA) discussed in his illuminating presentation, ‘Who's Responsible? How Manufacturers Can Become Responsible Suppliers in the Green-Conscious World’, there is a problem in the definition of terms. What do we mean by ‘sustainable’, ‘green’, ‘eco-friendly’, ‘ethically sourced’ and so on? There are no agreed definitions. Danks gave an excellent presentation looking at the principles of sustainability and covering aspects such as the Kimberley process for diamonds, ‘dirty gold’, and what the industry is doing to meet expectations. He addressed some of the difficulties in the use of such terms in other industries. He made the sound point that responsible jewellery production does not end with sourcing of the raw materials. The whole manufacturing and retail process is important too. Danks discussed corporate responsibility and then went on to detail the principles of sustainability. He used examples in other industries to illustrate how companies are moving to responsible products and manufacturing. He finished with the platinum industry and what companies like Anglo Platinum and Johnson Matthey are doing in terms of safety and sustainable development. This was a very important contribution to the jewellery industry and to the debate on sustainability and responsible manufacture. It certainly lifted some clouds for me.

The Symposium opened with the fourth in the series of ‘Basic Metallurgy’ presentations by Chris Corti (CoreGold, UK), which focused on ‘Deformation Processing, Joining and Corrosion’. He showed the difference between hot and cold working of the precious metals and the reasons why one might be preferred over the other. Joining technology in the jewellery industry is not just about soldering but also embraces welding techniques, and laser welding has become widespread in use. The low thermal diffusivity of platinum alloys makes laser welding especially suitable for platinum jewellery. The requirements of solders in jewellery were discussed and the relative dearth of information on platinum solders noted. He ended by discussing tarnishing and stress corrosion cracking, which are both aspects of corrosion well known in gold and silver jewellery. The high nobility of 900 or 950 platinum and palladium alloys makes such phenomena unlikely in these high-fineness alloys, but platinum or palladium alloys of fineness as low as 500 exist in some markets including Germany, the USA and the UK, and these may be susceptible to tarnishing, he noted.

A number of presentations this year examined the jeweller's bench and the working environment. Charles Lewton-Brain (Alberta College of Art and Design, Canada) spoke about ‘Bench Design and Layout’, and presented results of an online survey amongst bench jewellers via The Ganoksin Project. Predictably, everyone has their favourite layouts and ‘tricks’ to organise their tools. On the same theme, Arthur Skuratowicz (Anton Nash LLC, USA) spoke about ‘Ergonomics and Efficiency at the Jeweler's Bench’, where he considered placing tools for easy access. Taking the craft jeweller another step, Gary Dawson (Goldworks Jewelry Art Studio, USA) examined his relationship with the customer in his presentation ‘Paradigm Shift in Jewelry Manufacturing and Market Structure: An Examination of Contemporary Small Shop Jewelry Production; Design to Manufacture to Retail’. He used case studies of small craft jewellers to illustrate how small manufacturers can succeed in today's market.

On the technical front, Boonrat Lohwongwatana (Chulalongkorn University, Thailand) spoke ‘On Hardness’, discussing the various hardness measurement techniques and how they compare, a topic also discussed in the previous two symposia (2, 3). In an effort to better understand aspects of the investment casting process, Linus Drogs (Au Enterprises, USA) reported on a study to determine how the dimensions of deep holes in the patterns from computer aided design/computer aided manufacturing (CAD/CAM) equipment affect casting quality in his presentation ‘Volume to Surface Area of Plastic Cores, the Relative Survival Rates and the Overall Casting Quality’. He obtained interesting results but could not find a clear relationship. Continuing on the investment casting theme, Filipe Silva (University of Minho, Portugal) looked at thermal gradients during solidification in his presentation ‘On the Use of an Induced Solidification Process to Reduce Casting Defects’. With a simple technique of cooling the flask before casting, he set up a thermal gradient during casting which promoted directional solidification from outside to the centre of the mould, thus reducing the risk of shrinkage porosity, a technique easily adopted by casters.

The Japanese technique of mokume gane (‘wood grain effect’) was discussed by two speakers. Chris Ploof (Chris Ploof Studio, USA) spoke on ‘Mokume Gane Firing Methods and Their Effects on Appearances and Bond Strengths’ in which he looked at two bonding methods – liquid-phase and solid-phase – to bond the layers of metals to produce the initial billet. He found liquid-phase bonding to be faster and easier but a little inconsistent. Cold hand-forging of such billets was preferable to hydraulic forging. In the second presentation, Jim Binnion (James Binnion Metal Arts, USA) discussed ‘The Role of Grain Size and Growth on the Bond Strength of Diffusion-Bonded Mokume Gane’. This was a systematic study and he showed that the higher the bonding temperature, the more deformation the billet would withstand before delamination. He also noted that grain-refined alloys performed better at the lower bonding temperatures than non-grain-refined alloys.

Lastly, Steven Adler (Automated 3D Modeling (A3dM), USA) spoke about the pitfalls of CAD/CAM technologies in his presentation ‘CAD/CAM Follies’. He showed that the artist's imagination does not always translate well into practical jewellery designs that can be manufactured, despite the capabilities of the computer.

Once again this Symposium produced a programme with both scientific and practical information of high quality that will help the jewellery industry to progress in terms of better quality and improved processing technology. Indeed, it lived up to its reputation as the premier conference on jewellery technology. The work reported on platinum has certainly moved our knowledge further forwards.

Christopher Corti holds a PhD in Metallurgy from the University of Surrey (UK) and has recently retired from the World Gold Council after thirteen years, the last five as a consultant. During this period, he served as Editor of Gold Technology magazine, Gold Bulletin journal and the Goldsmith's Company Technical Bulletin. He continues to consult in the field of jewellery technology and, as a recipient of the Santa Fe Symposium® Research, Technology and Ambassador Awards, he is a frequent presenter at the Santa Fe Symposium.