Pd nanoparticles were deposited onto a nanoscale biogenic magnetite support without the need for pretreatment with a ligand. The support was synthesised in a one-step process at ambient temperature by the Fe(III)-reducing bacterium, Geobacter sulfurreducens. The resulting Pd-magnetite catalyst showed ease of recovery and high dispersion. Rates of reaction for Heck coupling of iodobenzene to ethyl acrylate or styrene were equal or superior to a commercial colloidal Pd catalyst.

Gasification of nonrecyclable paper wastes, such as shredded documents and paper sludge, was carried out in high-temperature liquid water over supported Ru, Rh, Pt or Pd catalysts to produce CH4 and CO2, with a small amount of H2. The order of catalytic activity was Ru > Rh >> Pt >> Pd. The most effective catalyst was Ru/C. Paper wastes were gasified to a limited degree (32.6 C%) for 30 min in water at 523 K. At 573 K, more complete gasification with almost 100 C% was achieved within 10 min.

An alumina-supported Rh–LaCoO3 catalyst can be used to convert biomass devolatilisation products to syngas in a double fixed bed reactor system. The reaction was tested at temperatures 500–700°C, Rh loadings 0.1–1 wt%, catalyst amount 0.25–1 g and N2 flow rate 12–60 Nl h−1. Good performance was achieved at 600°C. At 700°C complete tar conversion could be obtained with a Rh loading of 0.1 wt%, a catalyst amount of 0.5 g or a carrier flow rate of 48 Nl h−1.

High-throughput screening was used to find a cost-effective and scalable Rh-based catalyst with a bulky monodentate phosphite ligand for the asymmetric hydrogenation of a sterically demanding enamide as an intermediate towards a new potent melanocortin receptor agonist useful in the treatment of obesity. The catalyst was scaled up and used in the kilogram production of the desired bulky chiral amide.

Pt nanoparticles (PtNPs) on a microstructured paperlike matrix of ceramic fibre and zinc oxide whiskers (PtNPs@ZnO “paper”) were synthesised in situ. Good catalytic performance was demonstrated for the reduction of NOx with propene for exhaust gas purification, at a low reaction temperature and with one-third the dosage of Pt compared to conventional Pt-loaded honeycomb catalysts.

The desulfation process of a model Pt/Al2O3 DOC was investigated using temperature-programmed techniques and step-response methods. Desulfation was promoted under reducing conditions. H2O further promoted desulfation while CO2 had no obvious effect. Higher H2 concentrations generated more H2S. The desulfation process could be viewed as a stepwise reduction of sulfates to SO2 and then to H2S. A S loading equivalent to 3 g l−1 gave the largest SO2:H2S ratio.

Solid-solution homogeneous PdPt nanoparticles, 1, containing ~21 at% Pt were formed from core/shell nanoparticles with a Pd core of diameter 6.1 ± 0.1 nm and a Pt shell of thickness ~1.1 nm by a process of H2 absorption/desorption at 373 K. No size growth was observed during the process. 1 had a higher H2-storage capacity than Pd nanoparticles and this could be tuned by changing the alloy composition.

Ti alloy parts with enhanced corrosion resistance were fabricated by a powder metallurgy route. Commercial purity Ti powders were modified with 0.15 wt% Pd and hot isostatically pressed (HIPped). The microstructure and distribution of the Pd was characterised by optical microscopy and SEM. The phase composition and electrochemistry of the HIPped Pd-modified alloy was equivalent to that of wrought Grade 7 Ti (which contains 0.12–0.25 wt% Pd). This route overcomes the need to source and maintain an inventory of expensive Pd-modified grades of Ti and allows “on-demand” modification of powders with the level of Pd tailored towards the target application.

Air disinfection from bacteria and viruses was carried out on undoped TiO2 and on platinised sulfated TiO2 (Pt/TiO2) under UVA irradiation and in the dark. ~90% inactivation was achieved after 30 min irradiation on TiO2 and 90–99.8% on Pt/TiO2. The rate of photocatalytic CO2 production increased with both cell mass increase and photocatalyst mass increase. Pt/TiO2 showed higher rates of mineralisation and inactivation of microorganisms, likely due to a better charge carrier separation.

Ru-RuOx composite nanodots (‘RONs’) were grown on atomic-layer-deposited Al2O3 films using magnetic sputtering of a Ru target followed by postdeposition annealing. ‘RONs’ with density ~2 × 1012 cm–2 were obtained with good uniformity. Metal–oxide–semiconductor capacitors with ‘RONs’ embedded in Al2O3 films were electrically characterised for different configurations of tunnelling layers (T)/blocking layers (B), and the underlying mechanisms of charge storage were studied. For a 6 nm T/22 nm B device, a memory window of 3.7 V was achieved for a ±7 V programming/erasing voltage for 0.1 ms, with charge retention of more than 80% after 10 years.

Os(II)–arene complexes with carbohydrate-derived phosphite co-ligands were synthesised and their in vitro anticancer activity assessed. The Os compounds exhibited slightly higher IC50 values than analogous Ru(II)–arene complexes, however the rate of hydrolysis was very slow. Within the series of Os compounds, in vitro anticancer activity was highest for the most lipophilic chlorido complex.

Single-crystalline rhombic dodecahedral, cubic and octahedral Pd nanocrystals (see the Figure below) and their derivatives were selectively synthesised with varying degrees of edge- and corner-truncation by a seed-mediated method. (C16H33)N(CH3)3Br was used as surfactant, KI as additive and ascorbic acid as reductant. At constant ascorbic acid concentration, Pd nanocrystal shapes were affected by concentration of KI and reaction temperature. At zero, very low or relatively high KI concentrations, the {100} Pd facets were favoured. At medium KI concentration, the {110} Pd facets were favoured at high temperatures and the {111} Pd facets at low temperatures. These results provide mechanistic insights into the growth of well-faceted Pd nanostructures for applications such as H2 storage, gas sensing and catalysis. 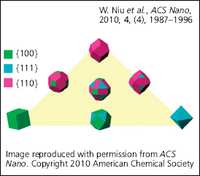 Atomic layer deposition (ALD) was used to prepare thin-film mixtures of Ir and Pt. By controlling the ratio between the Ir(III) acetylacetonate/O2 cycles for Ir ALD and the (trimethyl)methylcyclopentadienyl Pt(IV)/O2 cycles for Pt ALD, the Ir/Pt ratio in the films could be controlled precisely. Nucleation and growth of each metal proceeded smoothly, with negligible perturbation caused by the presence of the other metal, so that the composition and growth per cycle followed rule-of-mixtures formulae. ALD may be a facile and general approach for preparing noble metal alloy films and nanostructures for catalysis, chemical sensors, microelectronics, corrosion resistance, medicine, and other fields.