10th Scientific Bases for the Preparation of Heterogeneous Catalysts

10th Scientific Bases for the Preparation of Heterogeneous Catalysts

Novel preparation and characterisation methods for industrial catalysts of the future

The 10th International Symposium on the Scientific Bases for the Preparation of Heterogeneous Catalysts (‘PREPA10’) was held in Louvain-la-Neuve, Belgium from 11th–15th July 2010 (1). It was attended by over 270 delegates from 34 countries, of whom more than 20% were from industry. A scientific committee consisting mainly of industrial representatives refereed all published submissions and selected the presentations, which gave the symposium a strong industrial focus. The symposium included the following session topics: scaling up, shaping and macrostructured catalysts; basic understanding and innovations in unit operations; nanostructured catalysts; hierarchical porous supports and hybrid catalysts; and in situ spectroscopic analysis during catalyst preparation. In addition, almost 200 posters were presented in two sessions.

The plenary speaker was Galen Stucky (University of California, Santa Barbara (UCSB), USA) who presented on a range of topics, including the use of zeolites to prevent fatal blood loss. Of more relevance to catalysis, he presented some work on the AcHE (acetic acid, hydrochloric acid and ethanol) sol-gel method (2) which generates high surface area metal oxide materials from metal ethoxides.

The highlights of the first session included several presentations on the coating of metallic substrates with catalytic materials. Among these, Francesco Basile (Università di Bologna, Italy) presented an interesting approach to coating iron-chromium-aluminium alloy (FeCrAlloy®) substrates. Precursors of nickel or rhodium catalysts on hydrotalcite type supports were electrochemically deposited on FeCrAlloy (the working electrode) from nitrate solutions, followed by calcination to obtain the final catalysts. Catalyst loadings of up to 5 wt% were achieved after 1000 seconds of electrochemical deposition (3).

Also in the first session was an intriguing presentation by Bair S. Bal’zhinimaev (Boreskov Institute of Catalysis, Russia) on the use of glass fibre materials as catalyst supports (Figure 1) (4). Zirconium silicate glass was shown to be a suitable support for platinum and palladium catalysts, which were impregnated as the metal–amine complexes, [M(NH3)4]2+, and formed subsurface metallic clusters after calcination. The presence of the metallic clusters below the surface was proposed to provide selectivity, due to differing diffusion properties of various gases through the zirconium silicate network. A number of catalytic applications were investigated for these materials including sulfur dioxide (SO2) oxidation, nitrogen oxides reduction (deNOx) and acetylene selective hydrogenation (5, 6). In the deep oxidation of ethylbenzene, a higher activity was achieved for a glass fibre supported Pt catalyst at a Pt loading of 0.02 wt% than for a Pt/Al2O3 catalyst at a loading of 0.56 wt%.

Stefania Specchia (Politecnico di Torino, Italy) opened the second session with a talk on the use of solution combustion synthesis (SCS) as an intriguing way to produce palladium on zirconia-stabilised lanthanum manganese oxide perovskite, Pd(LaMnO3•2ZrO2), on FeCrAlloy gauzes for catalytic combustion of methane in commercial boilers. SCS allowed the preparation of highly porous materials with a very high dispersion of zero-valent palladium clusters (determined by the low-temperature adsorption of carbon monoxide onto the material). An in situ spray pyrolysis method, in which a solution of the catalyst precursors was sprayed onto the hot (400°C) FeCrAlloy support, was developed to overcome the scale-up difficulty associated with exothermic heat generation in the SCS process.

The use of high-temperature combustion methods for the synthesis of highly dispersed catalysts was continued in the poster sessions. Of note were two posters from Elena Golubina (Moscow State University, Russia) detailing the formation of nanocomposite metal-on-carbon materials (metal: Ni, Pd or Ni-Pd alloy) and Pd on ultradispersed diamond (UDD), and the application of these to the hydrodechlorination (HDC) of chlorobenzenes. Both types of material required forcing reaction conditions: nanocomposite metal-on-carbon materials were formed by heating the metal in a closed system to 2000°C in a hydrocarbon/argon gas mixture, while UDD was formed using a detonation method involving the explosion of trinitrotoluene (TNT) (7). High HDC activity was achieved for the catalysts; in the case of the Pd/UDD catalysts it was found that support defects enable the stabilisation of highly dispersed, partially oxidised palladium particles (8).

The use of carbon nanofibre supports was one of the recurring themes of the conference. Krijn de Jong (Utrecht University, The Netherlands) presented his work on the preparation of Pt-loaded, mechanically stable nanofibres (9). He claimed that loading increased with the number of acid sites on the nanofibres, with a maximum of 4 wt% (10). Heat treatments in nitrogen were found to decrease the number of acid sites and refluxing in hydrogen peroxide or nitric acid was used to increase the number. Another interesting talk came from Chen Jin (Ruhr-Universität Bochum, Germany) who presented the use of nanotube-supported sulfided Rh catalysts (Figure 2) for the oxygen reduction reaction in HCl (11). The well dispersed catalysts, which were found by X-ray photoelectron spectroscopy (XPS) and X-ray diffraction (XRD) analysis to consist of Rh cores with surface Rh–S species, displayed high electrochemical stability in the corrosive electrolyte. 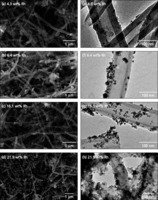 Peter Witte (BASF, The Netherlands) presented some work on surfactant-stabilised Pt, Pd and Pt-Pd nanoparticulate catalysts deposited on carbon or titanium silicate supports. These catalysts, which were developed as lead-free alternatives to the Lindlar catalyst, are now commercial products, successfully used in the semi-hydrogenation of substituted acetylenes, although possible Pd and surfactant leaching may affect the catalyst performance.

Keizo Nakagawa (The University of Tokushima, Japan) presented a talk about silica-coated Pt on carbon and its potential in selective hydrogenation applications (12). Siloxane precursors of different sizes were used to control the pore size of the silica formed, in the order: methyltriethoxysilane (MTES) > phenyltriethoxysilane (PhTES) > triethoxysilane (TEOS). Catalysts prepared using MTES as silica precursor allowed benzene absorption, while PhTES resulted in pores too small for benzene activity but allowed methane activation. Loïc Rouleau (Institut Français du Pétrole, IFP-Lyon, France) reported on the preparation of hierarchical supports by coating 1.6 mm diameter α-alumina spheres with γ-alumina and subsequent impregnation with Pd. A tight Pd eggshell and high Pd dispersion were achieved, as demonstrated by the high selectivity of the catalyst in the partial hydrogenation of styrene to ethylbenzene.

Several interesting presentations were given in the final session on in situ spectroscopic analysis of catalysts during and after preparation. Ursula Bentrup (Leibniz-Institut für Katalyse, Universität Rostock, Germany) presented work detailing the online monitoring of molybdate catalyst precursors using simultaneous X-ray and spectroscopic methods in situ (13). She presented an impressive technique that uses an ultrasonic trap to levitate droplets of reaction solution into laser or X-ray beams in order to mimic spray drying and characterise species formed during this process. Leticia Espinosa-Alonso (Utrecht University, The Netherlands) reported on in situ tomographic energy dispersive diffraction imaging (TEDDI) measurements (14) which allow time and space resolved concentration maps of crystalline and amorphous phases to be monitored across a support body during catalyst impregnation or calcination (Figure 3).

Raw tomographic energy dispersive diffraction imaging (TEDDI) images obtained from mapping of a catalyst body: (a) a ‘YT’ map generated from continuous measurement of one-dimensional ‘Y’ scan-lines in the centre of the catalyst body during calcination; (b) a two-dimensional ‘XY’ map of a pellet at a selected temperature point during the calcination process (to relate the XY map to a specific temperature point the sample is rapidly quenched to 25°C after the selected temperature is reached); and (c) typical total spectrum contained in one pixel of a TEDDI image. The blue pixels represent spectra with a low number of total counts, and the red pixels represent regions with a high number of counts (Reprinted with permission from (14). Copyright 2009 American Chemical Society) 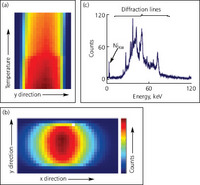 The exciting developments in catalyst characterisation concluded a diverse 10th Symposium which addressed current issues in catalyst preparation as well as original catalysts for the future. A book of abstracts is available containing further information about the talks and posters presented (15). 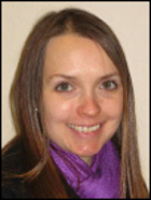 Dr Jennifer Houghton is a Senior Scientist working in Core Science studying the development of precious metal precursors and catalyst preparations at Johnson Matthey Technology Centre, Sonning Common, UK. She completed her degree in Chemistry at the University of Birmingham, UK, and PhD in Organometallic Chemistry at the University of York, UK, followed by Post Doctoral Research positions in Organometallic and Coordination Chemistry at LCC Toulouse, France, and ICIQ, Tarragona, Spain.