Phenylacetylene was selectively hydrogenated to styrene and 3-phenylpropyne to allylbenzene using Wilkinson's catalyst immobilised by ionic exchange on hectorite and montmorillonite or by covalent bonding on MCM-41 and SBA-15. Heterogeneous catalysis was more selective than homogeneous catalysis for phenylacetylene hydrogenation. The type of immobilisation had no influence on activity or selectivity.

A recyclable Grubbs–Hoveyda second-generation catalyst activated by a light fluorous tag was prepared. The catalyst exhibited higher activity than the parent or a previously reported variant for RCM reactions and could be routinely recovered. The light fluorous tag in the catalyst served as both an activator and a handle for separation and recovery by fluorous solid-phase extraction.

A continuous pilot plant for the degradation of polychlorinated biphenyls (PCBs) by Pd/C-catalysed hydrogenation in the presence of NEt3 (see the Figure) was designed and constructed. Undiluted PCBs from a capacitor and diluted PCBs with desulfurised trans oil could be decomposed at ambient temperature and pressure. This degradation method can be combined with catalytic desulfurisation technology for the purification of gasoline and kerosene.

Several close-to-production DOCs with Pt loadings between 22–130 g ft−3 were hydrothermally aged between 700–950°C and characterised by BET, HR-SEM, HR-TEM and CO-TPD. The pollutant conversion could be predicted for DOCs and NSCs with different Pt loadings and under different ageing conditions by determining the catalytically active surface area using CO-TPD.

A 2D nonisothermal monolith reactor model based on intrinsic detailed reaction kinetics was developed to simulate the performance of a commercial TWC. The model predicts TWC performance for both Pd (front) and Pt/Rh/Ce (rear) monolith bricks. The reactor model was further validated by predicting the TWC performance of the dual-bed reactor under the steady-state sweep test (st-ST) condition varying the air:fuel ratios from 14.23 to 15.03 at different reaction temperatures.

A single-step method for continuous production of up to 60 wt% Pt/C catalysts for the fuel electrode of a PEMFC is reported. An acetylene-air diffusion flame was used as the source of both heat and C, and Pt(acac)2-containing xylene droplets were injected into the flame. Size was controlled at 2–7 nm. The electrochemical activity was >74.9 m2 g−1 Pt, more efficient than an equivalent commercial (E-TEK 10 wt% Pt) catalyst.

Adhesion of Pt to modified C surfaces was assessed experimentally using a micro scratch test, and the bond strengths were calculated by first principles simulations. Pt adhesion to graphite could be improved by applying thin interfacial layers of Au, Ti or Cr, which may enhance the Pt catalyst durability in PEMFCs. Pt adhesion to non-hydrogenated diamond-like C was strong enough without the application of these thin layers.

Colloidal synthesis was used to prepare monodisperse Pd-Cu alloy nanoparticles with average diameter 3 nm for the as-prepared particles and 5–10 nm after removal of the capping agents. The resulting nanoparticles were deposited on high surface area C to form Pd-Cu/C catalysts. Their ORR activity in acidic electrolyte was high and depended on composition and heat treatment conditions.

Pt was added to two NiCoCrAlYTa coatings made by different manufacturing processes. XRD, SEM, EDS and TEM analyses showed that the Pt layer caused Al uphill diffusion from the NiCoCrAlYTa bulk to the Pt-rich surface during heat treatment. This is expected to provide good oxidation and hot corrosion resistance. The final microstructure was also influenced by the manufacturing process.

The electrochemical detection of single IrOx nanoparticle collisions on a NaBH4-treated Pt ultramicroelectrode (UME) was carried out for the electrocatalytic water oxidation reaction. IrOx transiently sticks to the electrode, causing a reversible ‘spike’ in the current. The frequency of spikes was directly proportional to particle concentration, and the peak current increased with applied potential. The observed current was sensitive to the material and surface state of the measuring electrode; a NaBH4-treated Pt UME was important for reproducibility.

Shape Control of Platinum and Palladium Nanoparticles for Catalysis

This mini review surveys solution-phase methods for preparing shaped Pt and Pd nanoparticles with specific crystallographic facets. Catalytic studies of the shaped nanoparticles and results of their activity and selectivity are highlighted. Aspects of synthesis and catalysis to be considered for the future development of more efficient and effective catalysts are given. (Contains 94 references.)

Pd nanoparticles (Pd NPs) were electrodeposited on a H-terminated Si(100) substrate and on a Au nanoisland template (NIT) supported on Si(100). As-deposited Pd NPs on H:Si consisted primarily of a metallic Pd core with PdxSi at the Pd and Si interface. Annealing the Pd NPs to 700°C in air promoted formation of PdO with an overlayer of PdO2. Pd NPs on supported Au NIT formed a Pd-Au alloy at room temperature at the metallic Pd and Au nanoisland interface. This was further enhanced by post-annealing at 700°C.

A series of red phosphorescent Ir(III) complexes based on 5-benzoyl-2-phenylpyridine derivatives was synthesised. Their photophysical and electrophosphorescent properties were investigated. Multilayered OLEDs with efficient red emissions were fabricated. The maximum luminance was 14,200 cd m−2 at 14.0 V. Luminous, power, and quantum efficiency were 10.40 cd A−1, 3.44 lm W−1 and 9.21% at 20 mA cm−2, respectively. The peak electroluminescence wavelength was 607 nm, with CIE coordinates of (0.615, 0.383) at 12.0 V. The device also showed a stable colour chromaticity with various voltages.

A new Ru photosensitiser, CYC-B7 (see the Figure), with an electron-rich bithiophene and a bis-heptyl-substituted carbazole substituent was found to increase the open-circuit voltage (Voc) of a dye-sensitised solar cell (DSSC) device to 788 mV, with an overall conversion efficiency (η) of 8.96%. The MLCT transition band was centred at 551 nm and the molar absorption coefficient was 2.19 × 104 M−1 cm−1. 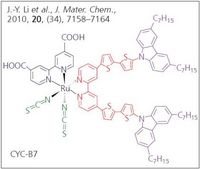