Smithson Tennant's name is well known to those who work with platinum group metals (pgms). He discovered both iridium and osmium in 1804, and his work with William Hyde Wollaston has been described in this journal (1). The unveiling of a plaque to note his birthplace in Selby, North Yorkshire, has also been recorded in Platinum Metals Review (Figure 1) (2). 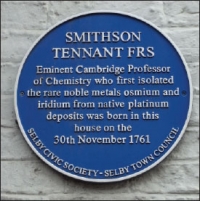 Tennant was elected a Fellow of the Royal Society (FRS) in 1785 at the remarkably early age of 23. Prior to his isolation of the two pgms, he had researched the nature of diamond and carbon dioxide, the agricultural importance of limestones and qualified as a medical doctor from Emmanuel College, Cambridge.

The 250th anniversary of Tennant's birth falls on 30th November 2011, and this article follows on from the 2006 paper in Platinum Metals Review (2) in providing more information on Tennant's upbringing in Selby and his path towards the isolation of iridium and osmium.

Smithson's family came from Wensleydale in North Yorkshire, England. His father, Calvert Tennant, grew up either at Mount Park Farm (Figure 2) in the dale itself, or at Park House (Figure 3), in the grounds of Bolton Hall, seat of local landowner Lord Bolton. The forename ‘Calvert’ means ‘cowherd’, emphasising the family's farming links.

The Tennant family was fairly affluent, having gained land and position by many years of advantageous marriage and property dealings. However, Calvert was not the eldest son, so was unlikely to inherit the tenancy of the farm, and was therefore encouraged to seek his fortune elsewhere. Calvert went into the clergy, was ordained in 1741 and made a Fellow of St John's College, Cambridge, in 1743. He became curate in Castleford and rector of Great Warley in Essex.

Wensley is over 60 miles (100 km) from Selby, and seemingly quite remote. However, the 1750s were an era of rapid expansion of the turnpike road system, part of which linked the Wensleydale area to the major trade route between Leeds and Selby.

Calvert may also have moved to Selby due to the status of Selby Abbey. At the time it remained one of the major ecclesiastical foundations of the North of England, and provided a busy living for the then vicar of Selby, Marmaduke Teasdale. There were insufficient clergy to service the needs of the congregation and the thought of a further living attracted Calvert most probably during the 1750s.

Calvert married Mary Daunt in Selby Abbey on Midsummer's Day, 1759. Mary was the only daughter of local apothecary William Daunt, a Selby landowner who had family links with the town of Beverley.

William had died the year before, effectively leaving his house at 12 Finkle Street and all his property to Mary on the death of her mother in 1761. Finkle Street, Selby, misnamed ‘Pinkhill’ on a 1792 survey (Figure 4), is within 100 yards of the Abbey (Figure 5) and number 12 survives today as the ‘Elizabethan’ pub (Figure 6).

Map of Selby drawn in 1792 with ‘Pinkhill’ rather than ‘Finkle’. Selby Abbey is approximately 100 m from Tennant's house

Smithson Tennant's birthplace, now the ‘Elizabethan’ pub, currently being redecorated, with the blue plaque of 2005 (see Figure 1) visible to the right 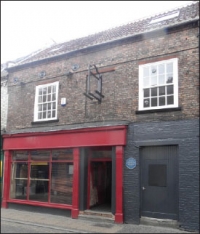 The vicar, Marmaduke Teasdale, recorded Smithson Tennant's birth on 3rd December in the Selby Abbey baptismal list for 1761 (Figure 7). His unusual forename seems to have no family antecedents, and is said to mean ‘son of a (black)smith’, yet smithing was not part of either family's heritage.

Extract from baptismal list of Selby Abbey for 1761. Smithson Tennant is listed as the fifth name down (Courtesy of Borthwick Institute for Archives, University of York)

His early education was at his father's knee (3), learning Latin and Greek from the age of five. Following Calvert's death, in 1771 Mary sought to further her son's education at various Yorkshire grammar schools. In the 18th century, these were predominantly boys-only boarding establishments, with perhaps 50 students, a master and an usher, with a strong link to the church, and a strong emphasis on the classics.

Smithson's first school was at Scorton, near Richmond, only a few miles from the family's home in Wensleydale. This was “a free school for all persons after being qualified to enter upon learning the Latin tongue” (4), and had over the years sent 14 pupils to Cambridge University. Scorton's geographical position and academic record may have persuaded Mary to send Smithson there.

Unfortunately, Smithson “left home with singular reluctance” and did not take to life at Scorton where he “gave the appearance of being indolent and dispirited and rarely joined the amusements of the rest of the boys” (4).

Smithson's interest in science began early. As medical books and chemicals were readily available at home due to his grandfather's profession as an apothecary, it is perhaps not surprising that he prepared gunpowder for his own amusement. When attending his next school nearer Selby, at Tadcaster, he experienced the public lectures of Mr Walker, an itinerant “teacher of popular philosophy”. His intelligent questioning of Mr Walker led to him being invited to attend all the lectures, and is the first external report of his interest in science.

However, Smithson did not remain long at Tadcaster, but went instead to Beverley Grammar School (Figure 8), possibly as a result of his maternal grandfather's family influence.

At this time, the Beverley Grammar School buildings were in the grounds of Beverley Minster, and the staff were entirely ecclesiastical. Founded in the year 702 AD, and the oldest non-public school in England, it was an institution that had an air of privilege.

Instruction was in Latin and Greek with the expectation that the boys would take an active part in the life of the church, and sing in Beverley Minster on Sundays. No record of Smithson's vocal talent survives, but under the enlightened headmastership of Dr George Croft he was encouraged to read widely. Amongst the volumes he studied was Newton's treatise on optics (5) which may have led to the experiment he is alleged to have carried out concerning the focussing of moonbeams in an attempt to melt butter (6).

At the end of his time at Beverley, Smithson, like all other leavers, was asked to sign a copy of a library book. The school still has some volumes going back to the 18th century, but unfortunately not Smithson's. Beverley Grammar School takes a pride in Smithson Tennant's achievements, as a plaque on a recent extension to the school's buildings show (Figure 9).

Academic Successes Before the Discoveries of Osmium and Iridium

By the time his schooling came to an end in 1780, Tennant had gained a wide knowledge of classical languages, a working understanding of French and a grounding in ‘Natural Philosophy’, as scientific matters were referred to at the time.

Tennant had expressed a desire to extend his studies under Joseph Priestley, the well-known English academic usually credited with the discovery of oxygen, but Priestley's other commitments made this impossible. Instead, he planned to study with Dr Joseph Black at Edinburgh University, whose fame lay in the characterisation of carbon dioxide and the outlining of physical concepts such as specific and latent heat. Unfortunately, further domestic tragedy precluded this. Tennant's mother died in 1781 following a fall whilst riding out with him.

This sad accident left Tennant alone in the world, with neither parents nor siblings. However, being a scion of a wealthy family in Wensleydale, and owner of property and land in Selby, the disposal of these assets afforded him financial security for the rest of his life. He seems not to have visited the town after 1788.

He studied at Christ's College, Cambridge, ostensibly in medicine but also with a strong interest in chemistry and botany. He matriculated in 1784 and in 1786 moved to Emmanuel College where he gained his Bachelor of Medicine in 1788 and graduated as Doctor of Medicine in 1796.

He also travelled widely in Europe. In Sweden he met Carl Scheele (also a researcher for new elements) and Jöns Berzelius (who helped develop a system of chemical nomenclature). In France he met Claude-Louis Berthollet (who also worked on chemical nomenclature) and possibly Antoine Lavoisier (discoverer of oxygen, hydrogen and the metric system).

For a very short time after matriculation in 1796 Tennant did practise medicine but he quickly concluded that he was not temperamentally suited to it and thereafter devoted himself to chemical research. He published a number of papers dealing with inter alia the composition of carbon dioxide (or “fixed air” as it was known at that time) and the nature of diamond.

The Discovery of Iridium and Osmium

In 1801 Tennant worked with Wollaston on a 186 kg mass of Columbia platinum ore (‘platina’) (3). In outline, platinum is soluble in aqua regia, a mixture of concentrated nitric and hydrochloric acids. When platina is dissolved in aqua regia, a highly coloured solution and a black residue are obtained, indicating the impurities in the ore.

Tennant fused the insoluble residue with alkali at high temperature and dissolved the resulting cooled solid in water, producing a further black solid and a yellow solution. The yellow solution was probably a basic form of osmium tetroxide, OsO4. The black solid was further treated with hydrochloric acid, the solid produced was fused with caustic soda and further treatment with acid obtained red crystals. These are most likely to have been Na2[IrCl6]·nH2O. On heating these, a white powder of an unknown element was obtained, which was later identified as iridium. The Royal Society's Copley Medal was awarded to Tennant on his 43rd birthday, 30th November 1804, to mark the intricate experimentation that lay behind these isolations.

Smithson Tennant's life will be commemorated, 250 years after his birth, by a schools' lecture at Selby Town Hall, a public lecture and an academic symposium concerning iridium and osmium chemistry to be held at the University of York, UK. For further information on these, please contact Dr Annie Hodgson at: chem-reach@york.ac.uk.

Information from Chris Goodwin and Nigel Young of Beverley Grammar School, from the staff of Beverley Minster and permission from Lord Bolton and John Loudon to visit the former Tennant family farm properties in Wensleydale, along with permission to reproduce a document in the custody of the Borthwick Institute and advice from Liz Kirby, a Wensleydale genealogist, are all gratefully acknowledged.

A chemistry graduate from the University of York, David Lewis has, for the last three years, been investigating the ‘Hidden Heritage’ of Selby for the educational charity, Groundwork North Yorkshire. On realising that Smithson Tennant, who first isolated the platinum group metals, iridium and osmium, was born in the town in 1761, David has been looking into Tennant's early years. This article is part of a more detailed work due to be published to mark the 250th anniversary of Tennant's birth, on 30th November 2011.