The latest annual Industry Review by Fuel Cell Today was officially launched on 14th September 2011 at the 4th World Hydrogen Technologies Convention in Glasgow, Scotland. This Review provides an introduction to fuel cell technology as well as a brief history of key developments and a timeline (see Figure 1). The developments in fuel cell unit shipments and megawatts shipped during the period 2007–2010 are covered in the ‘State of the Industry’ chapter and supported by data tables and a forecast for the full year of 2011. 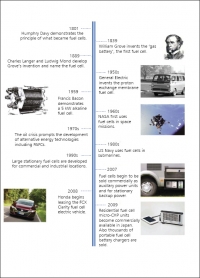 Fuel cells are one of the most versatile energy solutions ever created as they allow clean, efficient, reliable power generation for almost any device requiring electrical power. As such, fuel cells compete as a substitute for a range of power supplies in numerous portable, stationary and transport applications. This report analyses the fuel cell industry in terms of developments by application, region and electrolyte.

There has been a twenty-fold increase in shipments of fuel cells with year-on-year growth in both units and megawatts shipped in the last five years. Overall shipments of fuel cells increased by 40% in 2010 compared with the previous year, reaching a new high of 230,000 units. Portable fuel cells represented 95% of this total. In 2010, over 97% of the fuel cells sold globally used proton exchange membrane fuel cell (PEMFC) technology and most were fuelled by hydrogen. Annual fuel cell shipments are expected to grow by 25% between 2010 and 2011, exceeding 285,000 units. Since 2009, Europe has been the leading region of adoption of fuel cells, followed by North America and Asia (including Japan), with all four regions seeing considerable increases in shipments over that time.

Overview of the Market Sectors

As fuel cells are increasingly adopted for various applications, it is important to view the industry as an assembly of sectors at varying stages of development.

The portable sector leads the way in terms of shipments, it has increased by 75% each year since 2007. This has been dominated by fuel cell educational devices and toys. There have been some notable developments in the use of fuel cells in external battery chargers, although this market has not yet reached commercialisation. Problems with miniaturisation and system integration have prevented the direct integration of fuel cells into portable consumer electronics. However, external fuel cell charging products are being offered, Horizon Fuel Cell Technologies presented the MiniPAK in June 2010, a pocket-sized fuel cell charger which can deliver up to 2 W of constant power using a standard USB port and uses refillable fuel cartridges capable of storing up to 12 Wh of net energy.

There was growth of 10% in stationary fuel cell shipments in 2010 compared to 2009. North America and Asia dominate the stationary markets which can be subdivided into three categories: megawatt-scale units used for prime power, uninterruptible power supply (UPS) units for backup power and micro-combined heat and power (micro-CHP) units for residential use. In the large stationary sector, UTC Power continues to ship its PureCell 400 kW phosphoric acid fuel cell (PAFC) systems to customers throughout the USA. These have been installed in supermarkets, office buildings, residential properties and recently six units were installed in the new buildings on the site of the World Trade Center. In Asia, specifically Japan, cumulative shipments of the Ene-Farm fuel cell system for residential use had reached 13,500, all of which are PEMFC, by the end of 2010.

In 2010, shipments in the transport sector increased by 20% to reach a new high of 2400 units. The transport sector covers a huge range of end-uses, from cars and buses, to more niche uses such as ferries, unmanned aerial vehicles (UAV) and underwater vehicles for the military. Government assistance in the USA has helped fuel cells attain a commercial position in the electric forklift market. This trend is expected to continue as the technology is exported to other regions. Eight of the world's leading automakers aim to introduce fuel cell electric vehicles (FCEVs) by 2015. In 2010, the London black taxi was remodelled to integrate a hydrogen fuel cell by a group of companies including Intelligent Energy and Lotus Engineering. A fleet of twenty vehicles is to be produced in time for the 2012 London Olympic Games. Intelligent Energy have also announced its Suzuki Burgman fuel cell scooter had been given European Commission Whole Vehicle Type-Approval (WVTA), this enables vehicles or components of the same type to be accepted for production and sale within Europe without further testing, paving the way for full commercialisation of fuel cell motorcycles.

In the last few years, the prospects for fuel cells have considerably improved. In the last four years, more than 400,000 fuel cells were sold cumulatively. The various applications (portable, stationary and transport) are all boasting growth, with different electrolytes establishing their roles in particular sectors, and platinum-catalysed fuel cells seeing the most commercial traction to date.

Availability of the Industry Review 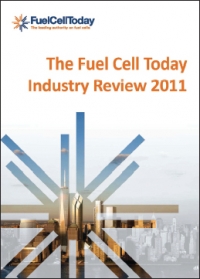