Continuous flow systems for hydrogenation using Pd/(PSi–Al2O3) (PSi = polysilane) hybrid catalysts were developed. The original Pd/(PSi–Al2O3) catalysts were used in these systems for the hydrogenation of unsaturated C–C bonds and a nitro group, deprotection of a carbobenzyloxy group, and a dehalogenation reaction. High catalytic activity was retained for at least 8 h under neat conditions. No Pd leaching was detected. The hydrogenation reactions could also be carried out successfully in water.

Pd core-silica shell particles (Pd@SiO2) were obtained by encapsulating Pd colloidal NPs with a SiO2 shell via the Stöber method. The Pd core NPs were well dispersed and had uniform size (4 nm) and shape inside the porous SiO2 shell. Pd@SiO2 showed high performance for the direct synthesis of H2O2, which was better than those of impregnated Pd/SiO2 and Pd/Al2O3.

H2O2 was employed as the terminal oxidant in the OsO4-mediated oxidative cleavage of olefins, producing aldehyde and ketone products. Aryl olefins were cleaved in good to excellent yield. Alkyl olefins cleaved in moderate to good yield for di- and tri-substituted alkenes. The use of the more environmentally benign H2O2 as the terminal oxidant in lieu of Oxone addresses concerns about the salt stream associated with the original protocol.

A microkinetic model was developed for NOx storage on a series of Pt/BaO/Al2O3 catalysts with Pt loadings from 0–3.7 wt%. Ba sites were classified into two storage site populations: proximal and non-proximal (bulk). A simple model for estimating the capacities of the two Ba site populations using the Pt loading was used to explain trends in the storage of NO/O2 and NO2/O2 and integrates existing literature models for NO2 storage on BaO/Al2O3, Pt-catalysed NO oxidation to NO2, and spillover chemistry involving NO2. The model shows reasonable agreement with the measured storage of NO and NO2 in O2 at 340°C for a range of storage times and Pt loadings.

This Perspective reviews potential pathways for increasing the cost-effectiveness and efficiency of low Pt alloys and core-shell-like catalysts, Pd-Me (Me = Co, Fe, etc.), Ru-Se and heat-treated MeNxCy-based catalysts for DMFCs (see the Figure). Fundamental understanding of the composition–activity and structure–activity relationships, innovative synthesis and promising development directions are highlighted. The main degradation mechanism of the catalysts and the corresponding mitigating strategies are presented. (Contains 262 references.)

Reproduced by permission of The Royal Society of Chemistry 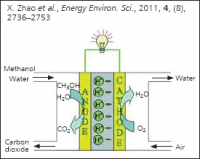 Highly active and stable Pt monolayer on C-supported IrFe core–shell NP (PtML/IrFe/C) electrocatalysts were synthesised. IrFe core-shell NPs were prepared by chemical reduction and subsequent thermal annealing. Pt monolayers were deposited on the IrFe core-shell NPs by galvanic replacement of underpotentially deposited Cu adatoms on the Ir shell surfaces. The specific and Pt mass activities for the ORR on the PtML/IrFe/C electrocatalyst were 0.46 mA cm−2 and 1.1 A mgPt−1, respectively. The catalysts were shown to have high durability.

The phase and surface properties of supported AuPt NPs have been shown to range from single-phase alloy, partial alloy, to phase-segregated structures depending on the preparation conditions, bimetallic composition and supporting materials. This conclusion was also supported by DFT computation for small AuPt clusters and molecular dynamics simulations for AuPt NPs of various sizes. For AuPt NPs supported on C materials, the nanoscale alloying or phase segregation was demonstrated to be controllable by thermal treatment temperatures.

Dense PdAgCu composite membranes were prepared by the sequential electroless plating of Pd, Ag and Cu on top of both disk and tubular porous stainless steel substrates. The H2 permeation performance was investigated over 350–450°C and a trans-membrane pressure up to 100 kPa. After annealing at 500°C in a H2 stream followed by permeation experiments, the alloy layer had a fcc crystalline phase with a bulk concentration (by EDS) of: 68% Pd; 7% Ag; and 25% Cu. The PdAgCu tubular membrane was stable for more than 300 h in a H2 stream. The permeabilities of the PdAgCu samples were higher than the permeabilities of PdCu membranes with a fcc phase. The cosegregation of Ag and Cu to the membrane surface was observed after H2 permeation experiments at high temperature.

IrO2 nanocrystals (NCs) were grown on vertically aligned CNT templates, forming IrO2/CNT nanocomposites, by MOCVD using (C6H7)(C8H12)Ir. The nanocomposites were characterised using FESEM, TEM, XRD and Raman scattering. The IrO2 varied from particle- to tube-like NCs as the deposition time increased (5–60 min). The particle-like IrO2 NCs may be used as a protective layer on CNTs, providing stable and uniform FE properties. The tube-like structure may increase the surface-to-volume ratio which makes the IrO2/CNT nanocomposites possible candidates for supercapacitor applications.

A molecular brush based on a conjugated polyelectrolyte (CPE) grafted with dense PEG chains was complexed with cisplatin to form cisplatin-loaded NPs (CPE–PEG–Pt). The obtained NPs have high far-red/near-infrared fluorescence and are able to release the drug in a continuous and slow manner. These NPs were used to visualise HepG2 cancer cells. The NPs also served as an in vivo fluorescent imaging probe that simultaneously tracks the in vivo drug distribution in mice upon intravenous administration.

A novel PEG-functionalised poly-isobutylene-maleic acid (PEG–PIMA) copolymer, which can complex with cis-Pt(II) through a monocarboxylato and a coordinate bond has been used to engineer a novel NP. This complex self-assembles into a PEG–PIMA–cisplatin NP, and exhibits an IC50 = 0.77 ± 0.11 μM, comparable to that of free cisplatin (IC50 = 0.44 ± 0.09 μM). The NPs are internalised into the endolysosomal compartment of cancer cells, and release cisplatin in a pH-dependent manner.