The physical properties and some application performance parameters of a platinum-palladium-rhodium-cerium alloy (Pt-4Pd-3.5Rh-0.1Ce) (wt%) are reported. This alloy possesses finer grain size, higher recrystallisation temperature and better mechanical properties, including tensile strength, lasting strength and creep resistance, than traditional Pt-10Rh and Pt-4Pd-3.5Rh catalytic alloys. Catalytic gauzes made of the Pt-4Pd-3.5Rh-0.1Ce alloy also show a higher conversion rate of ammonia to oxides of nitrogen, lower Pt loss rate, improved resistance to corrosion, adhesion and poisoning, and longer service lifetime for nitric acid production than gauzes made of the traditional alloys.

Nitric acid (HNO3) is produced by ammonia (NH3) oxidation through catalytic gauzes under pressures of 0.1–0.9 MPa and temperatures of 800–900°C. Pure Pt was originally selected as the catalyst due to its high catalytic activity and chemical stability (1). The operating life of catalytic gauzes strongly depends on the mechanical properties and grain size stability of the material from which they are made. The performance, lifetime and efficiency of gauzes used in the process of NH3 oxidation are also determined by the rate of inactive surface growth which impedes the flow of gases through the gauzes, the methods used to process the alloys into wires and gauzes, the structural stability of the alloys and the stability of parameters of the NH3 oxidation process (2, 3).

In order to improve the mechanical properties of Pt catalytic gauzes, Pt-Rh alloys with various Rh contents in the range 5–20 wt% Rh were developed. In the 1940s DuPont patented a Pt-Rh alloy containing 92.5–93% Pt and 7.0–7.5% Rh (4). In the 1950s the former USSR developed a Pt-4Pd-3.5Rh alloy catalyst by partial substitution of Pd for Rh in the formulation (5). After 25 years, another new catalyst alloy, consisting of 81% Pt, 15% Pd, 3.5% Rh and 0.5% Ru, was developed (5). Currently, Pt-Rh and Pt-Pd-Rh alloys are the main catalyst materials used for production of HNO3 through NH3 oxidation.

Attempts have been made to improve the properties of these alloys by further modifications. A Pt-10Rh alloy modified with boron was found to have lower grain growth and similar catalytic properties to a ‘classical’ Pt-10Rh alloy. Its application in the nitric industry would enable the temperature of NH3 oxidation to be increased, with subsequent improvements in process efficiency, while significantly reducing the emission of harmful nitrous oxide (N2O) to the atmosphere and maintaining the operating lifetime of the gauzes (6). Iridium, zirconium, vanadium and rhenium may also be added to modify the alloy. The properties of Pt-5Rh-1Ir-0.1Zr, Pt-5Rh-1Ir-0.01V and Pt-5Rh-1Re alloys were found to be similar to those of Pt-10Rh (7, 8).

Research on the strengthening effect of rare earth (RE) metals on Pt and its alloys was performed at Kunming Institute of Precious Metals (KIPM) in China (9–11). As a result of this work, new Pt-Pd-Rh-RE catalytic alloys, containing 0–15 wt% Pd, 0–10 wt% Rh, 0–1.0 wt% single or mixed RE and the balance Pt, were developed and patented by KIPM (12). The present paper reviews the main properties of Pt-Pd-Rh catalytic alloys modified by Ce additions and their application in the production of HNO3 in China.

2. Microstructure of the Alloys

In order to compare the Pt-10Rh binary alloy (‘PR-1’) and the Pt-4Pd-3.5Rh ternary alloy (‘PR-2’) with the Pt-4Pd-3.5Rh-0.1Ce quaternary alloy (‘PR-3’), a parallel study was carried out (13). X-Ray diffraction (XRD) patterns indicated that the three alloys are single solid solution structures (14). The microstructures of the PR-2 and PR-3 alloys annealed at 900°C for 30 min are shown in Figure 1. It can be seen that the PR-3 alloy (Figure 1(b)) has a much finer grain size than the PR-2 alloy (Figure 1(a)). The recrystallisation softening curves of the PR-2 and PR-3 alloys are shown in Figure 2, indicating that the recrystallisation temperature of the PR-3 alloy is about 120°C higher than that of the PR-2 alloy.

Recrystallisation softening curves of the PR-2 and PR-3 alloys 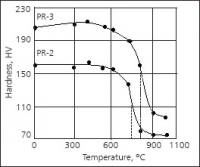 3. Physical Properties of the Alloys

The mechanical properties of the three alloys after annealing at 900°C for 1 h and after annealing continuously at 1000°C at a rate of about 20 m min−1 are indicated in Table I. Mechanical tests were carried out at room temperature. The tensile strength (σb) of the PR-3 alloy was significantly higher than those of the PR-1 and PR-2 alloys under both sets of annealing conditions. The tensile elongation (δ) in 100 mm of the PR-3 alloy was similar to those of the PR-1 and PR-2 alloys (13).

The Mechanical Properties of the PR-1, PR-2 and PR-3 Alloys

Tensile strengths of the PR-1, PR-2 and PR-3 alloys at various temperatures 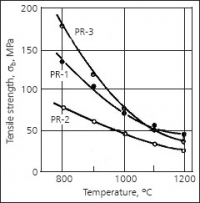 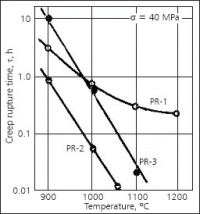 3.2 Oxidation and Volatilisation of the Alloys

The volatilisation losses caused by oxidation of the three alloys during isothermal heating at 900°C in pure flowing oxygen were studied (15). The relationship between the weight loss per unit area (ΔW/S) and the heating time (t) shown in Figure 6 can be approximately expressed as in Equation (i):

Here K1 is the weight loss rate constant for the alloy samples. The difference in K1 is due to the effects of the Rh, Pd and RE components in the alloys on the formation rate of platinum oxide (PtO2), as determined by Rubel et al. (16, 17). It can be seen from Figure 6 that the PR-3 alloy had the smallest K1 value of the three alloys studied. 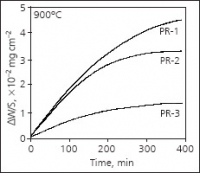 4.1 Oxidation and Volatilisation of the Catalytic Gauzes

The rates of Pt loss from catalytic gauzes made from each of the three alloys were determined during parallel industrial experiments over a period of two years in an atmospheric pressure reactor (18). The relationship between the parameter Ψ (Ψ = ΔW/W × t), which is the sum of the relative Pt loss per day for the PR-2 and PR-3 alloy gauzes, and the running time (t) is shown in Figure 7. It can be approximately written as Equation (ii): 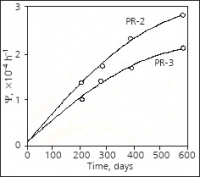 It should be noted that Equation (ii) has the same form as Equation (i) because the same mechanism of Pt loss applies.

4.2 Conversion Rate of Ammonia to Oxides of Nitrogen

The mechanism of NH3 oxidation over Pt, Pd and Rh wires has been reported (19). The overall reaction pathways to N2O, nitrogen monoxide and nitrogen are equivalent on each of the three platinum group metals. NO is a primary reaction product, while N2 and N2O originate from consecutive NO transformations. The extent of the secondary reactions determines the net NO selectivity. Rh is the most active catalyst for the unwanted reduction of NO by NH3, while Pt shows the lowest activity. This explains the superior NO selectivity attained over Pt. NO selectivity approaching 100% at complete NH3 conversion can be equivalently attained over Pt, Pd and Rh by increasing the oxygen content in the feed. For a feed of O2/NH3 = 10, both N2O and N2 production are suppressed due to the impeded NO dissociation and favoured NO desorption at high O2 coverage.

The catalytic activity of Pt alloys is related to the O2 adsorptivity of Pt. High-resolution electron energy loss spectroscopy (HREELS) revealed two characteristic peaks at 700 cm−1 and 870 cm−1 due to O2 adsorbed on Pt (111) at 92 K. This suggests that molecular oxygen may be attached on the surface of the Pt atoms. At higher temperatures, a dissociatively adsorbed O atom has a loss peak at 470 cm−1, which may be assigned to a Pt-O stretching vibrational mode (4). This mode may promote the formation of active compounds and speed the NH3 oxidation reaction. Pd metal has intrinsic catalytic activity for the NH3 oxidation reaction, and the Pd component in the Pt alloy can also help to reduce PtO2 to Pt and to prevent the formation of rhodium(III) oxide (Rh2O3) (20). Therefore adding or increasing the content of Pd in a Pt-Rh or Pt-Pd-Rh alloy would be expected to increase the NH3 conversion rate.

The unfilled 4f electron shells of RE metals, especially elements such as cerium, lanthanum and praseodymium which have a variable valence, may be responsible for their catalytic activity. Under the conditions of the NH3 oxidation reaction, Ce metal is oxidised to CeO2 or Ce2O3 in a reversible oxidation-reduction reaction, Equation (iii):

The Ce component has a large oxygen storage capacity. If the alloy has a Pd component, CeO2 may be reduced and attached to Pd crystal surfaces (11). This can increase the oxygen storage capacity of the Pd lattice, and new active sites for NH3 oxidation may be formed at the lattice interfaces between Pd atoms. This may explain the high NH3 conversion rate of 98.5% observed for the PR-3 alloy catalyst in the atmospheric pressure reactor.

It should be noted that these results may contain errors due to ignoring the increased weight of CeO2. It is difficult to measure the CeO2 weight increase, and as the alloy contains less than 0.1 wt% Ce evenly distributed throughout the alloy, only the small amount of Ce at the surface would become oxidised. Therefore this weight increase was ignored.

The smooth surfaces of the original gauzes gradually became roughened during operation. It has been suggested that between 286°C and 374°C, adsorbate-enhanced surface diffusion of Pt can cause surface restructuring, well below the temperatures reported for significant Pt transport through the gas phase via volatile PtOx (21). Pt atoms, or rather PtO2 particles, evaporating from a wire surface can lead to catalytic NH3 oxidation taking place close to, but not at, the gauze wire surface itself. Pt is then deposited on catalyst or catchment gauzes, forming deposits known as ‘Brussels sprouts’ or ‘cauliflowers’. These deposits have little catalytic activity. The Pt deposits on catalyst and catchment gauzes have a dense structure, with crystal-oriented flat subgrain walls (22, 23).

Surface of: (a) PR-2 alloy and (b) PR-3 alloy catalyst gauzes after 6 months’ service in parallel atmospheric pressure reactors (magnification × 200)

The Pt-4Pd-3.5Rh-0.1Ce alloy has a finer grain size in both the as-cast and annealed form, higher recrystallisation temperature, greater tensile and lasting strengths, longer creep-rupture time at high temperature, and lower weight-loss rate constants than the traditional binary Pt-10Rh alloy and ternary Pt-4Pd-3.5Rh alloy. Catalytic gauzes manufactured from the quaternary Pt-4Pd-3.5Rh-0.1Ce alloy demonstrate a higher conversion rate for the oxidation of NH3 to oxides of nitrogen, a lower Pt loss rate, better resistance to corrosion, adhesion and poisoning, and longer service life for the production of HNO3 in industrial atmospheric and medium pressure reactors.

Xin Hu is a Senior Engineer at Kunming Metallurgy College, and a PhD student at Kunming University of Science and Technology in China. His research interests are mainly in developing and producing new materials based on precious metals for industrial application. He has published several papers and won national prizes for his work.

Professor Yuantao Ning is a Professor of Physical Metallurgy at Kunming Institute of Precious Metals in China. His main research interests are related to principles of alloying and new materials based on precious metals, particularly platinum group metals and their alloys, including those modified by the rare earth metals. He has published around 200 papers in national and international periodicals and won national prizes for his scientific achievements.

Professor Dr Liangwei Chen works at Kunming University of Science and Technology in China, where he carries out X-ray diffraction and scanning electron microscopy (SEM) analysis. He has released 48 X-ray powder diffraction patterns to the International Centre for Diffraction Data® (ICDD®). His main fields of research include alloys of the platinum group metals as well as zinc- and titanium-based alloys.

Professor Qingnan Shi is the Director of Educational Administration at Kunming University of Science and Technology in China. He has carried out important studies on nanomaterials by severe plastic deformation, mainly copper-, aluminium- and titanium-based alloys. He advises several research groups on topics including platinum-based superalloys, alloys for high-temperature applications and materials analysis.