Platinum group metals (pgms) have been a key component in automotive emissions control catalysts and systems since their conception in the first decade of the twentieth century. In 1909 an audience in London was introduced to the idea that a supported platinum catalyst in the exhaust box or silencer could remove the products of incomplete combustion from a gasoline engine (1). This presentation by the French chemist Michel Frenkel, entitled ‘Deodorisation of the Exhaust Gases in Motor Vehicles’, was remarkable as it was only a couple of years after the Model T Ford (Figure 1) went into production. 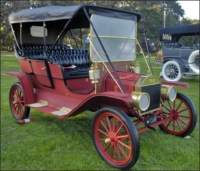 The Development of Autocatalysts

A century after this first announcement, with the accumulation of over 30 years’ practical experience since the first use of catalysts in the 1970s, commercial catalysts are today applied to most motor vehicles across the globe. There has been a continual striving to improve the catalyst performance and function, but also to reduce, or thrift, the amount of pgms applied to the catalyst. Frenkel suggested 30 g of platinum would be sufficient for the 25 horsepower motor vehicles of his time; today, combinations of platinum, palladium and rhodium are used on much more powerful vehicles. For example, the gasoline three-way catalyst (TWC), which can remove carbon monoxide, hydrocarbons and nitrogen oxides (nitric oxide (NO) and nitrogen dioxide (NO2), or NOx) simultaneously, contains less than 10 g of pgm and can produce tailpipe exhaust emissions that are cleaner than the air drawn into the engine!

But what of the role of pgms in the future of emissions control? What are likely to be the major challenges?

The Future of Emissions Control Technology

An increasing emphasis on greenhouse gas emissions, combined with a need to meet NOx and particulate emissions legislation, means that engine and vehicle manufacturers are forced to improve engine designs and power trains. This means engines will get smaller and new designs will be encountered, for example, hybrids combining an advanced internal combustion engine with a battery (Figure 2). One of the consequences of improved fuel economy is decreasing engine out temperatures. This is often coupled with increased levels of pollutants such as CO, hydrocarbons and particulates. The pgm-containing catalysts of the future will need to be more active, work at lower temperatures, respond rapidly to the change in operating mode of the vehicle, and remove pollutants as soon as the engine is switched on.

For many aftertreatment solutions we are approaching the stage where catalyst performance is not limited purely by catalyst activity. For example, the low temperature performance of a selective catalytic reduction (SCR) catalyst is limited by the temperature at which the urea solution can be injected into the exhaust, and this is governed by urea hydrolysis and the need to avoid the formation of deposits in the exhaust system.

Oxidation catalysts are pgm-based. Their low temperature activity is limited not by activity for CO oxidation but by inhibition by hydrocarbons, NOx and water. Therefore, the use of zeolites to trap hydrocarbons until the catalyst temperature is high enough to burn them will increase. NOx adsorbers, based on pgm, will also be required to hold NOx until the downstream SCR or NOx trap catalysts are warm enough to remove it.

A method that has been practically demonstrated for improving engine efficiency in diesel and gasoline engines is to introduce some hydrogen into the engine alongside the fuel. This helps combustion, and can also reduce emissions of NOx and particulate matter (PM) (2). The hydrogen would be produced by converting some of the fuel into CO, carbon dioxide and hydrogen in a process known as reforming. Typical reformer catalysts will contain pgms, such as rhodium, and to drive the reaction the whole system will need to be integrated with the engine so that waste heat from the engine can be used.

Worldwide legislation will continue to tighten and encompass new vehicle types and pollutants. For example, in Europe CO2 emissions regulations will be phased in over the next few years, and nitrous oxide (N2O), which is 300 times more effective than CO2 as a greenhouse gas, will be regulated from 2014 in the USA. Therefore, catalyst chemists and engineers must continue to improve catalysts and systems to produce N2O in amounts as close to zero as possible. Particulate number will also be controlled in Europe from 2014, and improved systems to control PM will be required in the future as the legislation tightens further.

Legislation will also extend to other vehicle types, including ships, trains and stationary engines, and the pgm systems will need to meet the specific challenges of these applications. For example, currently ships use fuel with high sulfur levels, but in-harbour legislation may require them to carry low sulfur fuels for use in port. Also, stationary engines can be very large, and therefore so will be the catalyst which, if pgms are needed, necessitates very efficient use of the pgm to bring the cost as low as possible.

Another future challenge for emissions control catalysts could be the range of fuels available. It is already possible to buy many of the ‘new’ fuels, and it will be necessary for the catalysts to work no matter what fuel is used in the engine; some new vehicles and ships already use dual fuel engines. Fuels that may be encountered include synthetic fuels, such as those derived from coal or biomass; hydrogen; biofuels such as fatty acid methylesters or ethanol; methanol; compressed natural gas; and blends of these.

Lower temperatures and the continuing presence of poisons will continue to restrict the use of base metal catalysts and necessitate the use of pgm catalysts. But even in the event that base metal catalysts find a greater role in emissions control technologies, for example in SCR catalysts, these are significantly promoted by upstream pgm catalysts for NO2 generation.Thrifting of the pgms will continue to be important while the catalysts still need to operate efficiently and overcome all the challenges outlined. To address all these issues an integrated approach is required, involving fuel suppliers, engine and vehicle manufactures, and catalyst chemists and technologists. Without a doubt, with all these new challenges, many opportunities for pgm-containing emissions control catalysts and adsorbers remain as we look to the future.

This article is based on and updated from an item written for the Royal Society of Chemistry’s journal Education in Chemistry (3).

Dr Paul Millington originally joined Johnson Matthey in the Emission Control Research group in 1995. After a short break in the automotive industry he rejoined in 2001. He currently works on all forms of pgm-containing aftertreatment in the Emission Control Research group at the Johnson Matthey Technology Centre, Sonning Common.

Dr Andy York joined Johnson Matthey in 2000, initially in the Emission Control Research group, he is currently on secondment at the Department of Chemical Engineering and Biotechnology at the University of Cambridge working on a range of academic and business related projects involving catalysis and engineering.