Ru-catalysed asymmetric homogeneous hydrogenation (AHH) was used as the key step of a multi-kg scale synthesis of an enantiomeric fluoropiperidine. The AHH of a tetrasubstituted β-fluoroenamide was carried out under mild conditions using a Ru/Josiphos catalyst with an ee of 98%.

Hydrodeoxygenation of a model feed mixture has been investigated. Oleic acid and tripalmitin in molar ratio 1:3 were hydrotreated at 325°C with 20 bars H2 in a stirred batch autoclave with 5 wt% Pt/γ-Al2O3. Hydrogenation of both reactants was limited and decarboxylation or decarbonylation of the ester and carboxylic acid functionalities were highly favoured, giving C chain lengths of odd numbers. Pd/γ-Al2O3 was found to be slightly more active than Pt/γ-Al2O3 and had a higher ratio of decarboxylation and decarbonylation to hydrogenation, while Ni/γ-Al2O3 was substantially less active. The conversion of oleic acid increased from 6% to 100% when the temperature was increased from 250°C to 325°C.

Pd and Pt supported on Al2O3, ZrO2 and TiO2 were screened as heterogeneous catalysts for the selective hydrogenation of sunflower oil in a batch reactor under different operating conditions. Metal dispersions between 6–69% and loadings between 0.3–3.9% were studied for promotion of selectivity in cis C18:1. Pd catalysts were found to be much more active than a conventional Ni catalyst. The Pt catalyst was not as active as the Pd catalysts but produced lower trans fatty acids. The level of trans could be further reduced by increasing the operating pressure to 10 bar and reducing the reaction temperature to 100°C especially with the Pt catalyst.

The Conversion of 1,8-Cineole Sourced from Renewable Eucalyptus Oil to p-Cymene over a Palladium Doped γ-Al2O3 Catalyst

The conversion of the title 1,8-cineole over a Pd-doped γ-Al2O3 catalyst was studied. Both Pd and γ-Al2O3 were found to be bifunctional catalysts but the Pd-doped system showed very high activity and selectivity, yielding >99% p-cymene, while producing large amounts of H2 at a bed temperature of ~250°C. The reaction mechanism is suggested to involve C–O bond fission in cineole, followed by dehydrogenation/isomerisation to give p-cymene.

The ferrocene-based diphosphine ligand (Sc,SFc)-TaniaPhos was shown to be highly efficient in the Rh-catalysed asymmetric hydrogenation of 3-aryl-2-(phosphonomethyl)propenates. Excellent enantioselectivity (90–98% ee) and high catalytic activity (S/C up to 1000) were exhibited. 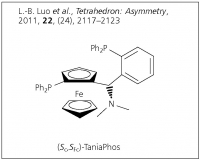 α,β-Unsaturated Imines via Ru-Catalyzed Coupling of Allylic Alcohols and Amines

α,β-Unsaturated imines were synthesised using only an allylic alcohol, an amine and a Ru catalyst. The use of large excesses of oxidants or dehydrating reagents and the purification of sensitive intermediates were not requried. The reaction was most effective with trisubstituted allylic alcohols. The reaction conditions are mild enough to preserve other unsaturated functional groups from reduction. The ability of Milstein's PNN Ru catalyst to catalyse the efficient redox isomerisation of secondary allylic alcohols to the corresponding ketones was also demonstrated for the first time.

SO2 adsorption products on Pt/Vulcan C catalyst coated membranes (CCMs) were investigated at different electrode potentials using a combination of in situ S K-edge XANES spectroscopy and electrochemical techniques. SO2 was adsorbed from a SO2/N2 gas mixture with the Pt/Vulcan C electrode potential held at 0.1, 0.5, 0.7 or 0.9 V vs RHE. S0 adatoms were identified as the SO2 adsorption products at 0.1 V; mixtures of S0, SO2 and sulfate/bisulfate ((bi)sulfate) ions at 0.5 and 0.7 V; and (bi)sulfate ions at 0.9 V.

Pd and Pt were used as anode and cathode DFAFC catalysts, respectively, and were applied to a Nafion membrane by CCM spraying. As multiple repeated DFAFC operations were performed, the cell performance of DFAFC steadily degraded. This is attributed to the electrooxidation of Pd into Pd–OH, which occurs between 0.1 and 0.55 V. In CV experiments where the voltages applied to the DFAFC single cell are lower than 0.7 V vs DHE, the cell performance was further deactivated due to continuous production of Pd–OH. Conversely, in CV experiments where the voltage was higher than 0.9 V vs DHE, cell performance was reactivated due to redox reactions of Pd–OH into Pd–O and Pd–O into Pd.

A catalytic hollow fibre membrane microreactor (CHFMMR) was prepared by electroless plating of a uniform, defect-free Pd/Ag membrane with a total thickness of 5.0 μm onto the outer layer of a YSZ hollow fibre substrate. A thin layer of a 10 wt% NiO/MgO-CeO2 ethanol steam reforming (ESR) catalyst (max. 1.3 wt%) with a high surface area was impregnated into the YSZ hollow fibres using the sol–gel Pechini method. ESR was carried out and high purity H2 was obtained outside the shell with a yield of <53% of the total H2 produced in the ESR. This CHFMMR can be used in the development of on-board H2 generation using EtOH as a fuel for PEMFCs in vehicular applications.

The brittle failure of PtRh10-Pt thermocouples in reducing atmospheres was investigated. Electron probe microanalysis indicated that the formation of the low melting point eutectic, Pt5Si2, is the main cause of brittle failure.

A C nano-felt with Pd NPs attached at the surface was prepared from electrospun polyacrylonitrile nano-felt surface-functionalised with amidoxime groups. The material consisted of relatively uniform and randomly overlaid C nanofibres with diameters of ~300 nm. The electrospun C nano-felt was mechanically flexible and resilient, and its resistance varied on exposure to H2 at room temperature. This material could therefore be used for the fabrication of gas- or bio-sensors.

Previously, the immobilisation of FePt NPs on a thermal oxide Si substrate was carried out by utilising the Pt–S bonding between the -SH in (3-mercaptopropyl)trimethoxysilane (MPTMS) and Pt in FePt NPs. In this study, attempts were made to control the distortion of the arrangement of FePt NPs using an MPTMS layer modified with a silane coupling reaction and a geometrical structure prepared by UV nanoimprint lithography. The hole-patterns used for the geometrical structure on Si(1 0 0) were 200 nm wide, 40 nm deep, and had a 500 nm pitch. The 5.6 nm FePt NPs were used to coat the hole-patterns by using a picolitre pipette.

The dissolution mechanism of cubic Pt NPs on a C substrate in 0.1 M NaClO4 was studied using AFM. The shape of the NPs did not change in the double layer region. The height of the NPs increased slightly at the onset potential of the oxide film formation. The NPs were dissolved from the sides in the oxide film formation region; the change of height was negligible. These results differed from those of the cubic Pt NPs on a Pt substrate, for which dissolution proceeds at the upper terrace.

Photodegradation of 2,4-D over PdO/Al2O3–Nd2O3 Photocatalysts Prepared by the Sol–Gel Method

Recovery of Platinum from Spent Catalysts by Sintering-Leaching

The sintering-leaching method was used to treat the Al2O3 in spent catalysts. Pt was then recovered from the residues after the enriching process. The residual C was 0.54% with a high decoking rate of 92.66%, after roasting the spent catalysts at 600°C for 1 h. The Pt was enriched 17.87 times by the sintering-leaching process. The ‘cinder’ was mixed with NaOH and then sintered at 800°C for 2 h. The ‘clinker’ was leached at 95°C for 10 min.

After storage under ambient conditions, peaks corresponding to sub-monolayer coverage of surface oxide and to chemisorbed O2 were observed on linear sweep voltammograms measured on sputtered Pd films. The surface oxide films formed on the Pd were found to be relatively insoluble in neutral conditions and in the absence of Cl−, where dissolution was limited by the solubility of Pd2+. In HCl the greater solubility of PdCl42− allowed the oxide film to dissolve completely.