30th November 2011 marked the 250th anniversary of the birth of Smithson Tennant in Selby, North Yorkshire, UK. Smithson Tennant described his discovery of osmium and iridium in a single paper in the Philosophical Transactions of the Royal Society in 1804 (1). There remains a strong connection to the Yorkshire region through BP's use of Ir catalysts on Humberside as part of the CativaTM process (2), the biggest single use of Ir in the chemical industry, and through pioneering research at the local universities. The University of York, UK, marked the anniversary with a public lecture by Dr Annie Hodgson in Selby itself, followed by two events at the University, one for schools and the public and one for scientists (3). The schools and public event at the National Science Learning Centre (23rd November 2011) attracted more than 200 participants and included exhibits from Johnson Matthey, BP and the University of York plus two lectures. The scientific celebration at the Department of Chemistry of the University of York (30th November 2011) was marked with lectures on a variety of research topics involving Ir and Os. In addition, a historical perspective was provided by David Lewis (a Selby chemist and local historian) and Bill Griffith (Imperial College, London, UK). This symposium attracted about 120 participants with visitors from Newcastle, Manchester, Sheffield, Leeds, Hull and Bradford. The events were sponsored by Johnson Matthey Catalysts, BP Plc, the Royal Society of Chemistry and the University of York.

The Discovery of Osmium and Iridium

The highlight of the first event for me was Martyn Poliakoff's (University of Nottingham, UK and Foreign Secretary of the Royal Society, London, UK) lecture; he led the audience through his own early adventures with the Os and Ir, then onto his role as anchorman of ‘The Periodic Table of Videos’ on YouTube with its huge following. There you will find not only videos on the two metals, but a special video about their discovery by Smithson Tennant (4). With help from the Royal Society's archivist, Poliakoff found the original manuscript copy of the paper describing the discovery, complete with numerous original corrections and an explanation of the naming of both metals. The name of Os comes from the Greek ‘oσμη’ – smell – for the smell that Tennant obtained when extracting the very volatile metallic oxide, evidently osmium tetroxide. Poliakoff also read a letter from the President of the Royal Society written following Smithson Tennant's death, suggesting that he had been about to announce his next discovery at the time.

The scientific event illustrated new applications of both Os and Ir. Luisa De Cola (University of Münster, Germany) gave a masterly presentation of the new organic light-emitting diodes (OLEDs) that she has developed, principally using Ir complexes (5). Ir complexes are so effective for electroluminescence in OLEDs because they have high quantum yields for photoluminescence. Moreover, the high level of spin-orbit coupling allows 100% use of the excited states, whether they are initially formed as singlet or triplets. One of De Cola's most fascinating discoveries is that aggregation can induce emission rather than quenching it. Thus the salts of type [Ir(2-(4,6-difluorophenyl)pyridine)2(2,2′-bipyridine)]+ [Ir(2-phenylpyridine)2(CN)2]− 1 emit strongly and even act as white light emitters in acetonitrile. The crystals have narrow pores between electrostatically bound ions that can be loaded with different solvents resulting in differently coloured emission (6). 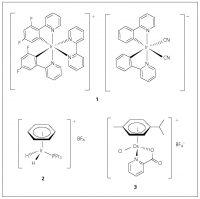 Luis Oro (University of Zaragoza, Spain) reviewed imine hydrogenation and related reactions of iridium dihydride complexes; for instance [Ir(H)2(η6-C6H6)(PiPr3)]BF4 2 acts as a an excellent precatalyst (7). This lecture linked with Anna Peacock's (University of Birmingham, UK) demonstration that analogous half-sandwich Os complexes OsCl(picolinate)(η6-arene) such as 3 are active anticancer agents and can even be more effective than their ruthenium analogues (8). Good activity depends particularly on the pKa and the rate of hydrolysis. Simon Duckett (University of York, UK) demonstrated how the mechanism of reaction of Ir complexes may be probed in the presence of para-hydrogen through the use of para-hydrogen induced polarisation (PHIP) of nuclear magnetic resonance (NMR) spectra. It is possible to see reaction intermediates such as an unstable isomer of Vaska's dihydride complex and probe the mechanism of reaction of anionic Ir complexes in BP's carbonylation processes. The spectra of both the complexes and the reaction products, for instance in hydrogenation, may be enhanced by factors of hundreds or even thousands. The most remarkable development is the use of Ir complexes as catalysts for ligand exchange in the presence of para-hydrogen, thereby enhancing NMR spectra. This approach, known as signal amplification by reversible exchange (SABRE), allows the enhancement of spectra of nitrogen bases without permanent coordination to the metal in the presence of para-hydrogen and catalysts such as [Ir(H)2(PCy3)(pyridine)3]BF4 4. SABRE can be observed both in solution and in magnetic resonance imaging and is under development for medical purposes (9). 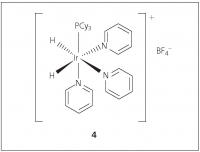 Finally, Tim Donohoe (University of Oxford, UK) demonstrated the development of Os(VI) catalysts for oxidative cyclisation. He included examples of isolated Os derivatives as well as simple catalysts such as potassium osmate K2[OsO2(OH)4]. The Os complex is reduced to Os(IV) in the reaction and is re-oxidised by an amine N-oxide or pyridine N-oxide. Initially, the catalyst was used with very acidic conditions, but it can now be employed in the presence of copper triflate as a Lewis acid and buffered close to neutral pH. This methodology has been demonstrated in the synthesis of the drug target (–)-neodysiherbaine A to make a tetrahydrofuran ring (10).

The symposium, dubbed as a ‘scholarly birthday party’ by Donohoe, illustrated a remarkable range of applications of Ir and Os. I particularly enjoyed seeing the way in which common structural types linked totally disparate applications. The structures provided food for thought on the question of whether research should be led by the application or by the fundamental chemistry. The events owed much to the inspiration of David Lewis who helped us celebrate with a 250th anniversary birthday cake and ale specially brewed in Selby for the anniversary, complete with a label taken from the blue plaque in Selby (Figure 1).

(a) The 250th anniversary birthday cake for Smithson Tennant; (b) ale specially brewed in Selby for the anniversary 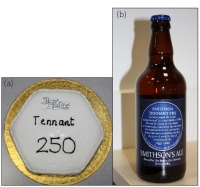 More of Martyn Poliakoff's videos about the Periodic Table can be found on YouTube at: http://www.youtube.com/user/periodicvideos?feature=watch

or on the Periodic Table of Videos website at: http://www.periodicvideos.com/

While Smithson Tennant's achievements, including the discovery of iridium and osmium are relatively well known, his background in Selby, North Yorkshire, is not. This book illustrates his family connections, his properties in Selby and how he obtained the wealth that enabled his scientific life and extensive touring to be funded. The book also documents his many scientific achievements. It is intended as a general primer to Tennant's life and times. The book is available from the author Mr David Lewis (Email: dglewis49@btinternet.com; 32 Church End, Cawood, Selby YO8 3SN, UK).

Robin N. Perutz has published extensively on the chemistry of all the platinum group metals. He is particularly interested in small molecule activation, organometallic reaction mechanisms and photochemistry. He has worked at the University of York since 1983. He was elected a Fellow of the Royal Society in 2010.