Development of Preformed Pd Catalysts for Cross-Coupling Reactions, Beyond the 2010 Nobel Prize

Strategies for the development of Pd catalysts based on L2Pd and LPd species, beyond the contributions of the 2010 chemisty Nobel laureates Heck, Negishi and Suzuki are reviewed. Well-defined, preformed Pd catalysts improve the selectivity and activity of cross-coupling reactions by reducing metal loading and ligand:metal ratios. This review describes the development of Pd precatalysts over the last ten years and highlights the benefits of using well-defined preformed catalysts relative to those generated in situ. It is concluded that new catalyst development can significantly expand the scope of these highly valued organic transformations. (Contains 145 references.)

Palladium-Catalyzed Cross-Coupling: A Historical Contextual Perspective to the 2010 Nobel Prize

This review attempts to trace the historical origin of the powerful Pd-catalysed C–C bond construction reactions, and outlines developments from the seminal discoveries leading to their eminent position today. Syntheses of natural products and drug molecules where the key step(s) consist of Pd-catalysed cross-couplings include the synthesis of losartan, the Merck Singulair® process, the total synthesis of discodermolide and the Novartis route to Gleevec® (imatinib). Unsolved problems, challenges and outlook for metal-catalysed cross-couplings are also discussed. (Contains 194 references.)

An achiral cationic ammonium–phosphine hybrid ligand paired with a chiral binaphtholate anion has been designed. This ion-paired chiral ligand gives a remarkable stereocontrolling ability to its Pd complex (prepared from Pd2(dba)3), which catalyses a highly enantioselective allylic alkylation of α-nitrocarboxylates. By exploiting the possible combinations of the achiral onium entities with suitable coordinative functionalities and readily available chiral acids, this approach could contribute to the development of a range of metal-catalysed, stereoselective chemical transformations.

The development of chiral Ir catalysts for asymmetric allylic substitution reactions and their application to the synthesis of natural products and other biologically relevant compounds is reviewed. Since their discovery in 1997, Ir-catalysed asymmetric allylic substitutions have developed into a powerful tool for the synthesis of chiral building blocks via C–C and C–heteroatom bond formation. This overviews the development of Ir catalysts derived from an Ir salt and a chiral phosphoramidite. (Contains 78 references.)

Efficient Degradation of TCE in Groundwater Using Pd and Electro-generated H2 and O2: A Shift in Pathway from Hydrodechlorination to Oxidation in the Presence of Ferrous Ions

Degradation of TCE in simulated groundwater by 1% wt Pd/Al2O3 and electrogenerated H2 and O2 was investigated. Oxidation of TCE in the presence of Fe(II) is significantly more efficient than hydrodechlorination in the absence of Fe(II) under weak acidic conditions. Complete dechlorination is achieved with the formation of nontoxic organic acids and CO2. A novel Pd-based electrochemical process is proposed for groundwater remediation.

Catalytic Ozonation of Oxalate with a Cerium Supported Palladium Oxide: An Efficient Degradation Not Relying on Hydroxyl Radical Oxidation

PdO/CeO2 at a low Pd loading was very effective in catalytic ozonation of oxalate. The oxalate was degraded into CO2. The catalyst was highly active and selective for oxalate degradation in water. ATR-FTIR and in situ Raman spectroscopy revealed that oxalate was adsorbed on the CeO2 forming surface complexes, and O3 was adsorbed on the PdO and further decomposed to surface atomic O, surface peroxide and O2 gas in sequence.

The alcohols (methanol, ethanol and 1-propanol) crossover behaviour of through MEA in DAFC was studied. The crossover rate decreased when the molecular chain length of alcohol became longer. The effect of the electrodes (60% Pt-Ru/C anode; 60% Pt/C cathode) to hinder crossover rate of MeOH was studied. The anode hinders the crossover rate of the alcohol. At below 100ºC, physical blocking effect was dominant to alcohol oxidation rate to reduce alcohol crossover, but over 100ºC, MeOH oxidation rate superior to physical blocking effect.

Nanoporous Pt/Ni alloys with nearly pure Pt surface and alloy core were obtained by a two-step dealloying process; they exhibit improved durability and activity toward ORR as compared to the Pt/C catalyst. Nanoporous-Pt1Ni1 alloys were first fabricated by dealloying Pt/Ni/Al alloy foils in 0.5 M NaOH solution at rt for 48 h. Then nanoporous-Pt1Ni1 alloys were further treated in dilute HNO3 (0.7 M) at rt for 30 min to prepare nanoporous surface alloys (nanoporous-Pt6Ni1). The products were washed several times with ultrapure water and dried at rt.

A voltammetric electronic tongue can be used for the determination of water quality parameters from influent and effluent wastewater from a Submerged Anaerobic Membrane Bioreactor pilot plant. The electronic tongue consists of a set of noble (Au, Pt, Rh, Ir and Ag) and non-noble (Ni, Co and Cu) electrodes housed inside a stainless steel cylinder. The electronic tongue could be used for the determination of soluble biological oxygen demand (BOD), soluble chemical oxygen demand (COD), ammonia (NH4–N), orthophosphate (PO4–P), sulfate (SO4–S) and alkalinity.

A large-area, continuous, few-layer reduced graphene oxide (rGO) thin film was fabricated on a Si/SiO2 wafer using the Langmuir–Blodgett method followed by thermal reduction. After photochemical reduction of Pt NPs on the rGO, the obtained Pt NPs/rGO composite was used as the conductive channel in a solution-gated field effect transistor. Real-time detection of hybridisation of single-stranded DNA with high sensitivity was achievable.

Triammine(oxalato)platinum(II) in which the oxalate anion acts as a monodentate ligand, was isolated when recrystallising [Pt(NH3)4](C2O4). Single crystal XRD study showed that the Pt(II) atom is coordinated on a distorted square by three N atoms of the ammine molecules and one O atom of the oxalate ligand. The crystal packing is stabilised by H bonds formed between ammine, water molecules and O atoms of oxalate. The complex underwent thermal decomposition at 200–231ºC in N2 atmosphere, giving rise to Pt, NH3 and CO2.

Molecular dynamics simulations were used to investigate the thermal stabilities of Aucore/Ptshell bimetallic NPs. The thermal stabilities of core-shell NPs are significantly enhanced with increasing thickness of the Pt shell. When the core size or shell thickness is very small, the melting is initiated in the shell and gradually spreads into the core. As the core increases up to moderate size, an inhomogeneous melting was observed. Due to the relatively weak confinement of the thin shell, local lattice instability preferentially takes place in the core, leading to the inhomogeneous premelting of the Au core ahead of the overall melting of the Pt shell.

Evaluation of a Ruthenium Oxyquinolate Architecture for Dye-Sensitized Solar Cells 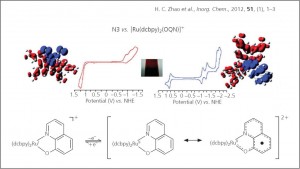 Pd thin films have wide application as protective coating for high temperature, dielectric films in microelectronics and catalysis. Advances in the preparation of Pd films by metal organic chemical vapor deposition are reviewed. The advantages and disadvantages of various precursors such as Pd(η3-ally)2, Pd(acac)2 and Pd(Me)2(PMe3)2 are discussed. (Contains 19 references.)

Os thin films and NPs were grown using atomic layer deposition. The Os thin films were successfully grown between 325ºC and 375ºC using osmocene (OsCp2) and molecular O2. The films consisted of only Os metal. The impurity contents of O, C and H were less than 1 at% each at all deposition temperatures. The deposition process has a substantial nucleation delay of ~350 cycles at 350ºC on the Al2O3 surface, which means that either NPs or thin films can be easily deposited by adjusting the number of deposition cycles.