An additive layer method is used to produce a catalyst. A layer of powdered catalyst preferably selected from Pt, Pd, Ir, Ru or Re or a catalyst support powder is formed into a layer; the layer is bound or fused into a predetermined pattern; these steps are repeated layer upon layer to form a shaped unit; and optionally a catalytic material is applied to the shaped unit.

The dehydroxymethylation of primary linear alcohols to produce linear saturated alkanes is carried out in the presence of a Ru or Rh catalyst, preferably Ru/C, at 1–250 bar and 150–250°C. 0.1–10 wt% of the catalyst is used. The starting material is a primary alcohol, ROH, where R is a saturated straight-chain linear alkyl radical with 8–24 C atoms.

Ruthenium Catalyst for Conversion of Cellulose

Cellulose is simultaneously hydrolysed and hydrogenated. The process consists of: (a) a cellulose-containing feedstock (comprising of lignocellulose and hemicellulose) is mixed with an ionic liquid in a reactor where a Ru/C catalyst is present at <80°C, preferably below 70°C. The ionic liquid consist of ZnCl2·4H2O. The undissolved components, consisting of lignin, are removed from the ionic liquid and used to generate H2; (b) a H2-containing gas is admitted to the reactor; and (c) the temperature of the reactor is increased to 80–220°C and is maintained for between 0.5 h and 6 h. Cellulose is converted to sorbitol at a yield of >90%.

Catalytic Conversion of Sugars to Polyethers

A process for preparing Pt-transition metal catalyst particles comprises of: (a) providing MxNy where M is Pt; N is an element chosen from Co, Ni, Fe, Cr, Cu, Ti, Mn and W or any intermetallic compound of two or more elements of this group; x and y are the weight fractions, 0 < x < 1 and 0 < y < 1 and x + y ≤1; (b) treating the catalyst particles in acid selected from HClO4, H3PO4, HNO3, H2SO4, HCl, HCOOH or CH3COOH; and (c) depositing Pt on the catalyst treated in step (b). The catalyst particles are used in fuel cells.

A nanocomposite is formed from reduced graphene oxide and nanoparticles of Pt, Pd, Rh, Ru, Ir, Au, Ag, Co, Mn, Fe, Te, Cu, Mo, Cr, or Ce. The particles may be non-spherical and may have shapes such as tetrahedron, triangle, prism, rod, etc. The nanocomposite may be used to adsorb heavy metals such as Pb, Mn, Cu, Ni, Cd and Hg from water; as a catalyst for Suzuki couplings, hydrogenation, dehydrogenation or petroleum cracking; in fuel cells; or in hydrogen storage.

A tarnish-resistant precious metal jewellery alloy containing 40–70 wt% Rh and 60–30 wt% Pt for the manufacture of watches and jewellery is claimed. Optionally ≤20 wt% of Ru, Ir and/or Au or ≤30 wt% Pd may be included. The jewellery is made using a lost wax process. 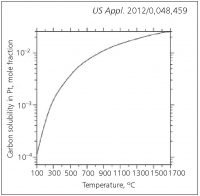 Moulds are made by forming surface layers (containing Pt, Pd, Ir, Os, Ru, Re, Hf, Ta or their alloys) on a hard alloy or SiC-based substrate. This is then heated to form oxidised layers. A part of the oxidised surfaces are removed and further heated for oxidation. These moulds provide stable moulding performance continually without melt adhesion and are suitable for moulding lenses.

A novel Os complex-based electrochemical species is claimed for use in detecting an analyte in a liquid sample. The complex is selected such that its substituents will bind to one or more of: a biowarfare agent, an abused substance, a therapeutic agent, an environmental pollutant, a protein or a hormone. 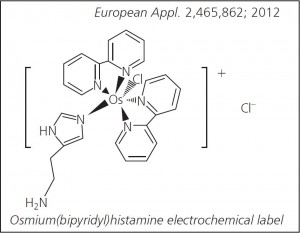 A process is claimed for recovering Pt from a Ru-containing acidic Pt solution by adding KCl in a stoichiometrically excess amount of K ion relative to Pt, therefore obtaining K chloroplatinate. This is dissolved in water, the pH of the solution is adjusted to 1–7 and K chloroplatinate is recrystallised from the solution (preferably in the presence of KCl).