The positive effects of palladium and ruthenium on the corrosion properties of titanium alloys are well known and led to the development of new grades to extend the operating window for titanium alloys (1). The same mechanism, cathodic modification, should also function in any alloy that is protected by a corrosion resistant oxide film. This is the case for stainless steels, which typically rely on a chromium oxide film to protect the alloy.

Cathodic modification refers to the increase in cathodic activity caused by the presence of platinum group metal (pgm) at the surface of the metal. This causes an increase in the cathodic current at any given potential, which will increase the open circuit potential (OCP) to higher voltages. Classical Tafel behaviour would show that the increased OCP would also lead to a higher anodic current (increasing corrosion) (2, 3). However, passivating alloys do not follow Tafel behaviour at all potentials, due to the formation of a passive region (where the passive film dominates the behaviour). The increase in cathodic potential can push the OCP into this passive region, preventing corrosion. If the increase in OCP is not high enough to reach the passive region, some dissolution will occur. However, during this dissolution the pgm will not dissolve into solution and more pgm will be revealed as the other metals do dissolve. This leads to an enrichment of the surface in pgm, which will increase the cathodic modification, pushing the OCP further towards the passive region and often passivating the alloy (4).

Stainless steels are more complicated than titanium alloys, due to both design (more elements are added to provide specific functions) and the use of recycled scrap steel in their production. The location of the pgm within the microstructure, which has a controlling effect on the benefits gained, is much harder to predict in stainless steels. Further, the OCP of a stainless steel in an oxidising solution is close to the transpassive region. Adding pgms will increase the OCP further, potentially out of the passive region and into the transpassive region, which allows attack to occur.

Corrosion in pgm doped stainless steels is therefore dependent on the alloy composition and the environment that the steel is exposed to. Corrosion in stainless steels occurs at breaches in the oxide film. These are discrete and the initial breaches cause metastable pits to form, which will only stabilise if the diffusion distance out of the pit is sufficiently long to present a barrier to loss of the solution within the pit. Pitting is a therefore a localised phenomenon and as such the location of the pgm relative to the pit is important to the corrosion resistance. One technique for investigating this is electron probe micro analysis (EPMA), which produces high resolution elemental maps of the surface. EPMA on polished sections through pits in ruthenium-doped 304 stainless steel showed that the ruthenium was enriched by the pit edge compared to the bulk (Figures 1(a) and 1(b)), as predicted by the theory outlined above. This implies that some regions within the pit will become cathodic with respect to the bulk, potentially allowing cathodic processes to operate within the pit. The results of this are likely to be system specific and could be investigated by artificial pit studies.

Pits are more common in chloride containing solutions, though the exact mechanism by which chloride causes film breakdown is not agreed (5–7). Chloride containing environments have also presented a situation where the choice of doping pgm is important. Electrochemical studies coupled with examination of the surfaces following the electrochemical testing on samples of 304 doped with either palladium, ruthenium or undoped, in solutions containing 0.05 M sulfuric acid and 0.1 M sodium chloride clearly showed the possible outcomes (Figures 2(a)–(c)).

Undoped 304 rapidly initiated pits at the exposed surface (Figure 2(a)). As expected these pits initiated under lacy covers of oxide film which provide the increased diffusion distance required to maintain the aggressive solution within the pit.

Palladium doped 304 showed a much lower current than the undoped steel during potentiodynamic testing (Figure 2(b)). However, after the experiment was completed, it was discovered that the surface of the alloy had disintegrated into powder. It is believed that this powder had acted as an insulating layer on the surface, reducing the current passed. Analysis of the powder showed a much higher palladium content than the doping level, which can be explained by remembering that the other elements are dissolving into the solution.

Ruthenium doped 304 showed virtually no sign of attack (Figure 2(c)) and the measured current density was orders of magnitude lower than had been measured on the undoped steel. This shows that the steel was well protected by the addition of ruthenium.

For a further practical example of how pgm doping can protect a steel, the effect of ruthenium on sensitisation in 304 stainless steel can be considered. Sensitisation is a degradation mechanism operating in stainless steels that are heated to between 500°C and 800°C. At these temperatures, chromium diffuses to the grain boundaries to form chromium carbides, resulting in the formation of chromium depleted regions by the grain boundary. These allow intergranular attack to develop in corrosive media. In ruthenium doped steels, the formation of carbides was observed, however the alloy resisted corrosive attack beyond a slight etching of the grain boundaries. 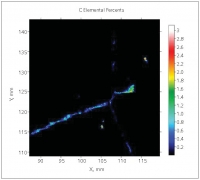 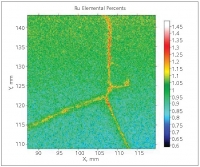 While not as consistently beneficial as additions of palladium have been seen to be in titanium grade 7, additions of the correct pgm to stainless steels can increase the corrosion resistance of the steel. To successfully protect steels in this manner, the corrosive environment and the pgm additions must be carefully considered. The location of the pgm within the steel can greatly affect its local protectivity.

Andrew Fones is a Research Scientist at the Johnson Matthey Technology Centre, Sonning Common, UK, working in the Platinum Group Metals Applications group. He is a corrosion scientist with a materials background, interested in the effects of platinum group metals doping on alloys.