Heterogeneous catalysis often involves the use of metal nanoparticles, often between 1–10 nm in size. These particles are usually finely dispersed onto high surface area supports and act as an active centre during a catalytic reaction. The performance of a supported catalyst can be directly related to the size and spatial distribution of the metal nanoparticles. Therefore, it is of increasing importance to understand the structures and dispersion of metal nanoparticles. Traditionally this requires the use of transmission electron microscopy (TEM) which is not limited by the electron beam interaction volume limitations that are experienced by scanning electron microscopes (SEMs). However imaging nanoparticles using SEM is an easier and lower cost option. Recent developments in the detection systems, specifically secondary and backscattered in-lens detectors, favour the use of low energy beams in SEMs which in turn allows the imaging of nanoparticles on supports.

Here we give a quick review of new detection principles and instrument design, the effects of the use of secondary and backscattered electron (BSE) in-lens detectors on imaging catalysts.

Figure 1 shows the principle of in-lens secondary electron (SE) detection (1). The beam is decelerated by an electrostatic lens and the field applied to decelerate also causes the acceleration of the scattered electrons in the other direction back into the lens on a helical path. The in-lens SE detector is placed on top of the final pole piece in the SEM chamber. The traditional SE detector (Everhart-Thornley (ET)) is also shown in the image, positioned outside the lens system and positively biased to draw SEs. The positioning of this detector favours both SE1 and SE2 electrons but the in-lens detector system favours mostly SE1s. For image generation in an SEM, a large number of secondary scattering products are generated by the interaction of the primary electron beam with the specimen material. To image the actual surface of a sample, SE1 electrons that have experienced one scattering event should be detected. Only SE1 electrons are generated in the upper range of the interaction volume and therefore contain direct information on the sample surface. These electrons can be detected very efficiently by the in-lens SE detector, whose detection efficiency results from its geometric position in the beam path and from the combination with the electrostatic/electromagnetic lens. As a result, high contrast images are easily achieved, even from a lower escape depth and energy. SE2 generation increases with decreasing atomic number, and consequently is worse for most of the catalyst supports such as carbon and alumina. 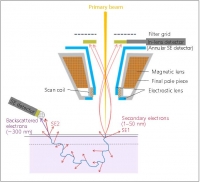 Figures 2(a) and 2(b) show images which were collected from a palladium on carbon sample. The contrast differences between SE and in-lens images can clearly be distinguished. In Figure 2(a), the image was acquired at typical 20 kV high tension and shows a lesser degree of detail, mainly due to the blurring effect of SE2 electrons as they originate from inner parts of carbon. In Figure 2(b), the image is acquired at low voltage using an in-lens detector, so it is much sharper and more detailed as this is mainly contributed by SE1 electrons which originate from the sample surface and the beam centre.

From a detector point of view, the standard ET SE detector picks up a mixture of SE1, SE2 and BSEs, which carry depth information as well as surface morphology information. This reduces the contrast and the resolution from the carbon particles. One of the reasons why the differences in contrast shown in Figure 2 are so stark is that the sample is made up of low atomic number atoms which cause larger interaction volumes for SE2, which in turn causes blurring.

The in-lens backscattered detector (also known as an energy selective backscattered (EsB) detector) is placed on the top of the in-lens SE detector (2) (as shown in Figure 3). When compared with a normal BSE detector, the EsB detector collects the low loss (LL)-BSEs which originate directly from the beam spot centre (3). The EsB image would avoid the contrast which is contributed by those BSEs originating in ranges relatively far away from the beam spot centre. 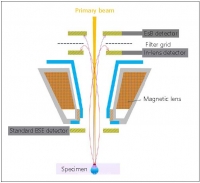 In order to clearly understand the meaning of the LL-BSE detection, it is necessary to explain a little bit about the energy distribution of all possible electron scattering processes. Figure 4 shows the whole energy spectrum of the secondary and BSEs (conventionally energies >50 eV) plotted with increasing energy (4). Figure 4 also shows a number of defined features in the spectrum such as Auger electrons, multiple inelastic scattered electrons, plasmon losses and low loss events which are shown by the sharp low loss peak at the right side of the spectrum. Under the low voltage primary beam energy conditions as shown in Figure 4, the SE and LL-BSE intensities become relatively high when compared with the broad saddle of multiple inelastic scattered electrons in between. The regions in the low loss peak coloured blue, green and yellow represent the discrimination areas set by the filter grid voltage of the EsB detector shown in Figure 3. In practice, it is possible just to cut off the SEs and the whole blue spectrum area when the filter grid is set to an optimum threshold. It would then result in a LL-BSE image with a good signal to noise ratio and good contrast. These fine contrast differences are obtained from electrons with very little energy loss generated in a very shallow region beneath the surface away from the area where multiple inelastic scattered electrons are produced.

Spectrum of scattered electron energies from the SE process to the LL-BSE (based on low voltage primary beam landing energies, where SE and BSE become relatively high compared to the broad saddle of multiple inelastically scattered electrons between them)

Figure 5 shows the images which were collected from platinum particles on a carbon support. It is possible to distinguish the contrast difference between Pt and C due to their large atomic number difference (Pt=78, C=6) in both images. But the main difference is the level of detail and the difference in the number of particles that can be observed between the two images.

Platinum on carbon catalyst: (a) taken at 20 kV using a standard BSE detector; (b) taken at 1.6 kV using in-lens backscatter detector (EsB) with the filter set at 700 V 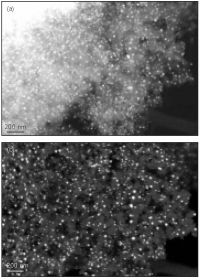 In Figure 5(b), it is clear that the EsB image better shows the placement and morphology of Pt particles on carbon. By using lower energy electrons it is possible to reduce the interaction volume and therefore the contrast from the surface layer is exposed in this image. This is the reason that we only see the particles near the surface whereas in the BSE image in Figure 5(a), the carbon is blurred and we can see all the particles as the signal comes from deeper parts of the sample. The natural deduction would be that it should be possible to change the voltage and observe particles at various depths (5). The clarity is also associated with the filtering of the LL-BSE which seems to make the biggest difference in the way the carbon is imaged as distinct particles rather than a blurred background.

The in-lens imaging technique using both SE and BSEs gives a distinct advantage to catalyst imaging. The two examples demonstrate that the SEs provide a more detailed and surface sensitive topography and the BSEs provide a more depth sensitive characterisation of the metal nanoparticles as well as helping to visualise these on individual units of support material.

The authors would like to thank both Henry Cai, Application Manager ASIA/PACIFIC, Zeiss NTS, Singapore, and Johnson Chen, Country Manager, Zeiss NTS, Taiwan, for sharing this EM information. Special thanks to Johnson Matthey Electron Microscopy team for support and discussion on this topic. 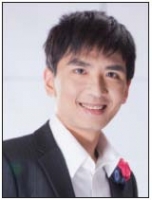 Winson Kuo obtained his PhD from the Metallurgy and Materials Department at the University of Birmingham, UK, in 2010. He has more than ten years’ research experience in both academic and industrial use of SEM, scanning transmission electron microscopy (STEM) and electron probe microanalysis (energy dispersive microanalysis (EDX), wavelength-dispersive X-ray spectroscopy (WDX) and electron backscatter diffraction (EBSD)). Since 2012, he has been responsible for developing electron microscopy techniques customised for Johnson Matthey materials, as well as developing and managing research projects with other partners from industry and academia. 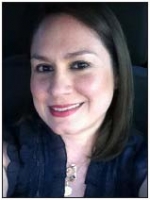 Martha Briceno received her doctoral degree in Materials Science from the University of Oxford, UK, and she carried out postdoctoral studies in the University of Illinois at Urbana-Champaign, USA, and the University of Oxford until she joined the Analytical Department at Johnson Matthey Technology Centre, Sonning Common, UK. Her main scientific interest is to develop new methods to help catalyst researchers obtain the best microstructural characterisation from their experiments. She is also expert on cryo-electron microscopy (TEM and SEM) and in-situ TEM experiments (in-situ heating experiments, in-situ straining and in-situ irradiation). 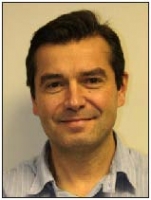 Dogan Ozkaya works as a Senior Principal Scientist and is in charge of the electron microscopy team in the Analytical Department at the Johnson Matthey Technology Centre, Sonning Common. He holds a PhD in Materials Science and Metallurgy from the University of Cambridge, UK. He carried out postdoctoral research in electron microscopy of various materials in several university departments, including the Cavendish Laboratory, University of Cambridge, and the Materials Department, University of Oxford, before joining Johnson Matthey in 2003.