RESULTS OF CALCULATIONS FROM FIRST PRINCIPLES

Work is being done at Mintek, the University of Leeds and the University of Bayreuth to build up a platinum-aluminium-chromium-ruthenium (Pt-Al-Cr-Ru) database for the prediction of phase diagrams for further alloy development by obtaining good thermodynamic descriptions of all of the possible phases in the system. Binary descriptions were combined, allowing extrapolation into the ternary systems, and experimental phase equilibrium data were compared with calculated results. Part I of this series of papers (1) addressed the Pt-Al-Ru system, and Part II (2) the Pt-Cr-Ru system. This final paper (Part III) deals with progress towards a platinum-aluminium-chromium-nickel (Pt-Al-Cr-Ni) database at the University of Bayreuth, using thermodynamic calculations from first principles to deal with the problem of sparse data. The Pt-Al-Cr-Ru and Pt-Al-Cr-Ni databases will eventually be merged to give a Pt-Al-Cr-Ni-Ru database.

Work has been ongoing in building a thermodynamic database for the prediction of phase equilibria in Pt-based superalloys (1–7). The alloys are being developed for high-temperature applications in aggressive environments. The database will aid the design of alloys by enabling the calculation of the composition and proportions of phases present in alloys of different compositions. This paper is a revised account of work presented at the conference: Southern African Institute of Mining and Metallurgy ‘Platinum Surges Ahead’ at Sun City, South Africa, from 8th to 12th October 2006 (7).

Part I, describing initial results for the Pt-Al-Ru system from the compound energy formalism model, was published in the July 2007 issue of Platinum Metals Review (1). Part II (2) described the different approach which was needed for the other binary and ternary combinations within the Pr-Al-Cr-Ru system, with simpler representation to allow for sparse data. This paper (Part III) completes the series by outlining work at the University of Bayreuth on the platinum-aluminium-chromium-nickel (Pt-Al-Cr-Ni) database, using thermodynamic calculations from first principles (ab initio). The Pt-Al-Cr-Ni database is eventually to be merged with the Pt-Al-Cr-Ru database to give a Pt-Al-Cr-Ni-Ru database.

Part II of this series of papers (2) described a simplified approach to the calculation of phase diagrams, for cases where use of the compound energy formalism model (1) is inappropriate due to the sparseness of experimental data.

At the University of Bayreuth, a different approach has been used to compensate for sparse data, using ab initio calculations to determine the enthalpy of formation of intermetallic compounds. These calculations, which are complex and time consuming, are based on density functional theory, as described by Kohn and Sham (8). The power of the technique derives from the fact that the thermodynamic results are often difficult to determine experimentally. The results can be used directly in a thermodynamic description of the alloy systems (9). The VASP program (10) has been used here to calculate the enthalpies of formation of the ordered compounds. At this stage, no magnetic contribution has been incorporated in the calculations, since there is some discrepancy in the experimental observations: for the L12-ordered CrPt3 Kussmann et al. (11) observed ferromagnetic behaviour, whereas Pickard et al. (12) observed ferrimagnetic behaviour. The total enthalpies of the pure elements were compared with those obtained by Wang et al. (13), with very good agreement.

The calculated phase diagram after thermo-dynamic optimisation is given in Figure 1 (7), and shows very good agreement with experimental data. The modelled eutectic temperatures agree, within the stated experimental errors, with the results of Venkatraman and Neumann (14) (derived on the basis of Massalski (15)), rather than those of Oikawa et al. (16). The ordering reaction still needs to be modelled correctly, and a later version of the Cr-Pt phase diagram shows promise (17). The small phase region of the L12 CrPt3 phase at low temperatures may be a result of not yet having taken the magnetic properties into account. Since all the Gibbs energies have now been modelled, it is possible to calculate further thermodynamic data. Figure 2 shows a comparison between the calculated and experimental chemical activities (18, 20). Using ab initio calculations in the thermodynamic model has predicted the presence of L12 Cr3Pt at low temperatures. This suggests that the platinum-rich side of the phase diagram should be examined further, probably using the diagram from Zhao (17). 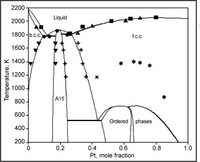 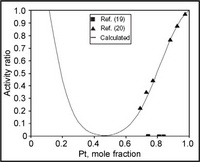 Thermodynamic assessment of the Cr-Pt system has already shown that many regions of the binary phase diagram are relatively unknown. The ab initio calculations used here show that a stable L12 Cr3Pt structure is achieved. Greenfield and Beck (21) discovered a stable L12 structure at 63 at.% Cr, although it is not shown in experimental phase diagrams (14). More experimental work using rigorous X-ray diffraction techniques needs to be done to substantiate the L12 and L10 phase regions. A database for the Pt-Al-Cr-Ni system will be created. Many experiments on the Pt-rich side of the Pt-Al-Cr-Ni system have already been performed (22). The addition of nickel increases the curvature of the γ' solvus, as shown in Figure 3 (23).

Phase diagram for the Pt-rich side of the Pt-Al-Cr-Ni system; experimental points (measured by Wenderoth and Vorberg) are taken from Reference (23). See Table I for key

The principal aim of the ongoing work at the University of Bayreuth is to describe the platinum-rich side of the Pt-Al-Cr-Ni system. It has been demonstrated that ab initio calculations can provide helpful information on the formation of phases to compensate for sparse experimental data on the alloy system. It is hoped that, in the long term, the Bayreuth database can be merged with the Pt-Al-Cr-Ru database, which is being developed by Mintek and the University of Leeds (see Part II of this series of papers (2)).

Financial assistance from the South African Department of Science and Technology (DST); the Platinum Development Initiative (PDI: Anglo Platinum, Impala Platinum and Lonmin); DST/NRF Centre of Excellence in Strong Materials; EPSRC Platform Grant GR/R95798; Deutsche Forschungsgemeinschaft (DFG; German Research Foundation); and Japan Society for the Promotion of Science (JSPS) is gratefully acknowledged. This paper is published with the permission of Mintek and the Southern African Institute of Mining and Metallurgy.

Johannes Preußner is a scientific researcher and Ph.D. student at the Chair of Metals and Alloys at the University of Bayreuth, Germany. His main interests include modelling and simulation in materials science and new high-temperature materials.

Sara Prins is a research metrologist at the National Metrology Institute of South Africa. She is undertaking Ph.D. research at the Pennsylvania State University, U.S.A., where she is working on phase diagram and first-principles calculations.

In his Ph.D. thesis at the University of Bayreuth, Markus Wenderoth developed new precipitation-hardened platinum base alloys for application at high temperatures and experimentally analysed their microstructure, high-temperature strength and oxidation behaviour. He is now working as a production engineer with Siemens Medical Solutions, Vacuum Technology Division.

Dr.-Ing. Rainer Völkl is an academic councillor and senior researcher at the Chair of Metals and Alloys, University of Bayreuth. His main fields of research include alloys of platinum group metals as well as nickel base alloys, testing of mechanical properties at high temperatures and electron microscopy.

Professor Dr.-Ing. Uwe Glatzel is head of the Chair of Metals and Alloys at the University of Bayreuth. His work had a big impact on the development of modern high-temperature alloys, mainly nickel base superalloys. He advises several research groups, including those working on platinum-based superalloys and other alloys for high-temperature applications, laser metallurgy, material analysis and artificial knee joints.