The UK Prize for Process Chemistry Research is sponsored by GlaxoSmithKline, AstraZeneca and Pfizer, and aims to encourage the development of new chemical reactions that will solve problems in process chemistry. Chemical reactions and novel reagents invented in university laboratories often turn out to be unsuitable for use at a large scale; the reagents may be too expensive or dangerous, or the reaction may not be feasible to scale up. The 2008 Prize for Process Chemistry Research was awarded to Professor Jianliang Xiao from the University of Liverpool, UK, for his group's work on the development of chemistry suitable for large-scale manufacturing.

Professor Xiao investigated the effects of reaction media, hydrogen bonding, ion pairing and co-catalysis on catalytic cycles and elementary steps in two areas. The first is the design and development of platinum group metal catalysts based on ruthenium, rhodium or iridium for the asymmetric transfer hydrogenation of ketones in water. For these reactions, Xiao's group revealed the viability and simplicity of the transformation and the impact of pH on the enantioselectivity, reaction kinetics and catalyst decomposition (1–5). An overview of their work is presented in this issue of Platinum Metals Review (6). Further studies have led to the development of efficient metal-counteranion cooperative catalysis for asymmetric hydrogenation of imines and direct reductive amination (7–9).

The second area investigated by Xiao's group is the synthesis of aryl ketones through the control of regiochemistry in the arylation of electron-rich olefins. This includes a new methodology for the direct acylation of aryl bromides with aldehydes by palladium catalysis, as well as the oxygen- and base-free oxidative Heck reactions of arylboronic acids with olefins (10–13). One thrust of this research is the tuning of the reaction pathway by exploiting secondary interactions at the molecular level.

Professor Jianliang Xiao (on left) receiving the GlaxoSmithKline, AstraZeneca and Pfizer Prize for Process Chemistry Research for 2008 at the 26th Process Development Symposium, organised by the Fine Chemicals Group of the Society of Chemical Industry (SCI) at Churchill College, Cambridge, UK, on 10th–12th December 2008 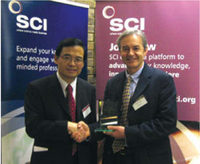