The annual Society of Automotive Engineers (SAE) World Congress is the automotive industry's largest conference and covers all aspects of automotive engineering. The 2009 World Congress was held in Detroit, USA, from 20th to 23rd April 2009. There were upwards of a dozen sessions focused on vehicle emissions technology, with most of them on diesel emissions. Attendance was down about 50% relative to earlier years, but most sessions had perhaps fifty to a hundred attendees, and some had more than two hundred.

This review focuses on key developments on diesel emissions control and catalysts from the conference. References in brackets refer to the SAE Technical Papers which can be purchased and downloaded from the SAE website (1).

Selective catalytic reduction (SCR) is the leading nitrogen oxides (NOx) abatement, or deNOx, strategy for both light-duty and heavy-duty applications. Recent studies have focused on system optimisation to allow 90% and greater deNOx efficiency.

Ford Motor Co continues to lead the publishing of cutting edge SCR papers at the SAE World Congress. At the SAE Powertrains, Fuels and Lubricants Meeting in October 2008, they showed that if upstream platinum-containing diesel oxidation catalyst (DOC) systems are exposed to temperatures above 670°C, platinum sublimation and subsequent condensation on the downstream SCR catalyst compromises deNOx efficiency as the presence of platinum leads to the oxidation of ammonia on the SCR catalyst (2). In a follow-up paper at the 2009 World Congress, they showed that palladium substitutions for platinum can help stabilise the precious metal, resulting in improved deNOx performance (Figure 1) (3). Hydrocarbon light-off temperatures were nearly unchanged for the mixtures containing platinum and palladium in a 2:1 ratio versus a platinum-only formulation. The authors showed that the formulation needed to be optimised for the DOC compositions, as one formulation with Pt:Pd = 2:1 outperformed the other.

Replacing platinum with palladium decreases platinum migration from the upstream diesel oxidation catalyst (DOC) to the downstream selective catalytic reduction (SCR) catalyst, leading to a higher NOx conversion over a wider temperature range. The precise formulation of the catalyst also has an effect on its deNOx performance (3). Ageing of the SCR catalyst was carried out at 850°C for 16 hours. ‘DOC B’ and ‘DOC C’ represent two different formulations of the Pt:Pd = 2:1 catalyst, from different suppliers, with different methods of stabilising the Pt. The ‘Pd’ line (green) shows that no Pd migrated to the SCR catalyst. For comparison, a Pt DOC had a NOx conversion efficiency of 20% at 300°C (2)

Copper zeolites are preferred for light-duty applications because they have better low-temperature deNOx efficiencies. Ford investigators confirmed earlier reports by others (see for example (4)) that low-temperature performance strongly depends on ammonia storage status and capability (5). They have now found that about half of the ammonia is stored in sites that hold the ammonia more tightly than the other half. This ammonia was not as readily available during rapid, short-lived changes in conditions as the more loosely held ammonia. Ford also explained ammonia oxidation dynamics unique to copper zeolites, with ammonia oxidation reactions in the absence of NOx beginning at 250°C. DeNOx performance above 400°C was significantly compromised as a result. No N2O, NO or NO2 was detected between 250°C and 400°C.

To overcome the high-temperature deNOx deficiencies of copper zeolites due to ammonia oxidation, Ford showed in another paper that if iron zeolite is used in the front two-thirds of the SCR catalyst, with copper zeolite in the back third, a better balance between low- and high-temperature deNOx efficiency can be realised (6). To regain lost light-off performance, they added a small copper zeolite catalyst upfront (in an amount equivalent to 8% of the volume of the main catalyst), although this compromised some performance at temperatures above 475°C due to ammonia oxidation.

There is continued interest in applying SCR catalysts to diesel particulate filters (DPFs) to save on space and perhaps cost. Most reports (see for example (7)) show the expected back pressure increase for the DPF together with a minor compromise in deNOx efficiency of the SCR as soot builds up, at least to modest levels. However, Ford showed a surprising and unexplained drop in deNOx efficiency below 400°C when going from a space velocity of 30,000 h−1 to 40,000 h−1 in dynamometer testing (5), which was not evident in laboratory reactor studies. They also revealed a consistent loss of deNOx efficiency between 275°C and 350°C.

In a sister paper, Ford showed that this latter phenomenon may be related to hydrocarbon coking (8). Two copper zeolite catalysts showed reduced deNOx efficiency when exposed to propylene in this temperature range. Coking was observed at ∼310°C, which correlates to the onset of propylene oxidation under the experimental conditions. This coking did not affect the DPF back pressure, indicating a morphology different from that of diesel soot. One zeolite formulation showed the same susceptibility to diesel fuel exposure, while the other did not.

Lean NOx traps (LNTs) are emerging as the favoured deNOx system for smaller diesel passenger cars due to lower costs and smaller space requirements compared to SCR systems. They are also the system of choice for lean-burn direct injection gasoline engines. Investigators from the University of Tennessee and Oak Ridge National Laboratory, USA, quantified the ageing behaviour of baria-based LNTs (9). As shown in Figure 2, platinum grain size increases upon exposure to temperatures above 843°C but does not change much with short exposures to 1000°C. Conversely, with long exposure times, grain size increases over the whole temperature range, with rapid grain growth at above 1000°C. Similarly, baria grain size increases upon exposure to temperatures greater than 929°C. Baria grain growth more adversely affects nitrate stability (and therefore deNOx efficiency) at temperatures above 300°C than at 200°C.

Platinum grain size rapidly increases to >5 nm upon ageing at temperatures >843°C. The starting size was 2.5 nm. Growth is significant for long times and/or higher temperatures (9) 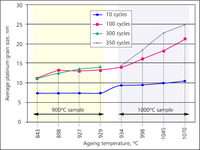 Many researchers have shown that hydrogen and carbon monoxide (CO) improve LNT desulfation and low-temperature NOx conversion (see for example (11)). Cummins and Johnson Matthey added an improved partial oxidation catalyst to the LNT formulation to generate more hydrogen and CO in situ (10). Desulfation temperatures were dropped from 700°C to 500°C, low-temperature (200°C) deNOx efficiency increased from 40% to 60%, and 0.10 g of rhodium (out of 0.14 g in the catalyst tested) could be replaced with 1.06 g of palladium.

There is emerging interest in combination LNT and SCR systems, wherein ammonia (NH3) is purposefully generated in the LNT during rich periods, and then stored in the downstream SCR catalyst to reduce NOx. Ford showed that by shifting deNOx capacity to the SCR, LNT pgm loading could be reduced, while improving aged low-temperature deNOx efficiency (85% efficiency at 225°C for the highly loaded LNT versus 95% efficiency for the lightly loaded LNT + SCR combination), and decreasing ammonia and hydrogen sulfide emissions (12).

Similarly, Delphi incorporated an iron-zeolite SCR behind a silver-based lean NOx catalyst (creating a ‘dual SCR’ for both hydrocarbon- and NH3-SCR) (13). The deNOx system has no pgm and does not need an external source of ammonia. As shown in Figure 3, in the presence of 1% hydrogen the total system deNOx efficiency is >80% at ∼175°C and above, and the NH3-SCR contributes 10% to 40% of this deNOx efficiency depending on temperature. Even the addition of as little as 0.1% hydrogen improved system deNOx efficiency by 20% to 25% between 200°C and 325°C, and fuel penalties were only 1% to 3% at 20% exhaust gas recirculation (EGR), and decreased further at higher EGR levels.

Work is continuing on performance enhancements and fundamental understanding of diesel particulate filters (DPFs). Michigan Technological University, USA, quantified soot oxidation on catalysed soot filters (14). They recommended carrying out partial regenerations to maintain a soot membrane that keeps soot from penetrating into the walls and increasing back pressure. This approach also reduces fuel consumption due to more rapid and efficient oxidation at higher soot loadings.

Investigators at Aristotle University of Thessaloniki, Greece, in collaboration with Ecocat Oy (Finland) and Notox A/S (Denmark) used modelling and experimental approaches to investigate the effects of pgm distributions and loadings and DPF characteristics on system performance (15). For example, while keeping the total Pt content constant, they showed that it is best to put half of the Pt on the DOC and half on the filter, as shown in Figure 4. Using a DOC had a much larger impact than total pgm content on soot burn; CO and hydrocarbon oxidation on the DPF was more dependent on washcoat dispersion than on pgm loading; and the application of depth filtration mechanisms resulted in higher back pressure with no improvement in soot oxidation.

Mass change due to soot oxidation for systems with varying proportions of platinum on the diesel oxidation catalyst (DOC) and the diesel particulate filter (DPF) respectively (14). For a constant amount of Pt (40 g ft−3 of DPF), it is best to put half on the DOC

NGK Insulators Ltd showed some benefits of adding an inorganic membrane to the inlet walls of DPFs (17). The membrane improves initial (or clean) DPF filtration efficiency, and keeps particulates from entering the wall, resulting in lower soot-burdened back pressure.

Some of the more interesting work on DPF catalysts reflects the recent interest in direct soot oxidation catalysis, wherein the soot oxidation is carried out at the soot–catalyst interface by lattice oxygen at relatively low temperatures compared to the gaseous oxidation (see for example (18)). In an oral-only presentation, Honda reported direct oxidation of soot beginning at ∼200°C, with rapid oxidation occurring at 250°C, using the yttrium-manganese-ruthenium-oxide YMn0.95Ru0.05O3 as a catalyst (19).

DOCs have been a staple of diesel emissions control for about fifteen years and are present in all systems. Despite the significant commercial tenure of DOCs, researchers in the field are still learning about their behaviour and improving their performance.

For example, researchers at Oak Ridge National Laboratory and the University of Tennessee, USA, investigated DOC poisoning effects by analysing field-aged Pt/CeO2/γ-Al2O3 catalysts from a transit bus application (low load) (20). Almost all of the ageing effects were attributed to soot accumulating on and blocking catalyst sites. Oxidising the soot returned the DOCs to their fresh-state performance. Phosphorous and other ash components had negligible effects.

Finally, DOCs will play a very important role in enabling engines to run in low-temperature combustion modes. These low-load modes of operation use high levels of EGR (low oxygen) to give very low NOx and particulate emissions, but rather high hydrocarbon and CO emissions in cooler exhaust gas. Investigators at Johnson Matthey (Japan) and Isuzu Advanced Engineering Center, Ltd (Japan) showed that hydrocarbon and CO oxidation temperatures increase as oxygen content decreases and hydrocarbon + CO levels increase (21). They improved the catalyst by improving its oxygen storage properties, suppressing CO adsorption, and increasing the number of active sites that have multiple functions. Figure 6 shows that the temperature of 50% conversion (T50) for hydrocarbon oxidation for aged catalysts drops from 260°C to 180°C.

The impact on the temperature of 50% conversion (T50) of a new oxidation catalyst designed for engines using low temperature combustion modes (low oxygen, cooler exhaust) (21). Catalyst B is a commercially-available Euro 4 catalyst with a high Pt:Pd ratio, while D and E are newly-developed catalysts with a lower Pt:Pd ratio. Each has a different washcoat

The 2009 Society of Automotive Engineers World Congress had many valuable contributions and continues the tradition of providing insights into future directions in diesel emissions control.

Although the first selective catalytic reduction catalysts were tested on vehicles more than fifteen years ago, much progress is still being made on understanding fundamentals, such as ammonia storage and oxidation dynamics, and improving performance through composition engineering and optimising the interplay with other components. Hydrocarbon-based deNOx methods are advancing, with more information being provided on durability and further progress being made on cost reduction, specifically by using the device to generate ammonia for use in a downstream SCR catalyst. Diesel particulate filter development is aimed at further improvements in filtration efficiency and regeneration behaviour. Finally, improvements are still being made to diesel oxidation catalysts, the diesel emissions control technology with the longest history, in terms of understanding their in-use ageing and improving their performance in exhaust gas with low levels of oxygen. 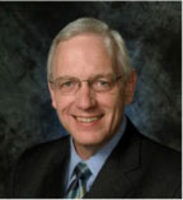